Ringhaddy Sound is located on Strangford Lough’s western shore to the west of Islandmore, on the northeast coast of Ireland. It is a beautiful and popular mooring ground with some club visitor pontoons.


Ringhaddy Sound is located on Strangford Lough’s western shore to the west of Islandmore, on the northeast coast of Ireland. It is a beautiful and popular mooring ground with some club visitor pontoons.

The Sound offers complete protection from all conditions. However wind against tide in a strong northerly, and to a lesser extent southerly, maybe a little uncomfortable. The enclosed stretch of water provides shelter sailing in all weather, all tides and has ample marks to make daylight navigation straightforward.

100 metres east of the pontoon.

The following Ringhaddy Initial Fix. will set up a final approach:

Taking a mean tidal offset from Dover's tide, we expect your targetted date's associated local tide at Ringhaddy Sound to be:

Data based on an average tide is only accurate to within one hour, if you more precise times are required use the ISA tidal predictions, with Strangford offset +03:02.

. Details for vessels approaching from the south are available in eastern Ireland’s Coastal Overview for Strangford Lough to Dublin Bay

. Details of the approaches, tidal timings and the run up the Narrows to about a ½ mile below Strangford are covered in the Entering and exiting the Strangford Narrows

Click the 'Next' and 'Previous' buttons to progress through neighbouring havens in a coastal 'clockwise' or 'anti-clockwise' sequence. Below are the ten nearest havens to Ringhaddy Sound for your convenience.
Ten nearest havens by straight line charted distance and bearing:
These havens are ordered by straight line charted distance and bearing, and can be reordered by compass direction or coastal sequence:
To find locations with the specific attributes you need try:

Ringhaddy Sound is located on the western shore of Strangford Lough behind Islandmore and Pawle Island, about 3 miles northward of Killyleagh and between it and Killinchy. It can be approached from southward in depths of 3.5 metres, or from northward through a channel with a depth of 8.5 metres.
It has an old stone quay at its head and is home to Ringhaddy Cruising Club close south. Ringhaddy Sound provides a naturally-occurring, deep-water anchorage that is well sheltered by some of the many islands that festoon the Lough.

The Ringhaddy club has a concrete slip, a large dinghy dock and a number of pontoons where visiting yachts, from outside the Lough, are welcome to come alongside for short periods. Ringhaddy Cruising Club sailing club may be contacted by their contact page

ringhaddycc1975@gmail.com. Vessels that can take to the bottom may dry out against the north side of the old quay.

Details of the approaches, tidal timings and the run-up the Narrows to about a ½ below Strangford are covered in the Entering and exiting the Strangford Narrows

After entering Strangford Lough proceed up the deep waters of the eastern side of the Lough to the Ringhaddy Initial fix. This is situated approximately 200 metres east of the Limestone Rock beacon Q.R.3M. This beacon marks the eastern point of Pladdy Rock that covers after 4 hours of the flood tide, and there are two additional perches marking the western and northern points.

From there track in on the 318° line of bearing off a conspicuous circular building that is a converted windmill, along with two white leading marks near the shore that lead into Ringhaddy Sound.

One mile in, the route closes to about 500 metres to pass between the unmarked Brownrock Pladdy and Brown Rock to the port or south side. Both cover at half tide where only seaweed may be visible. However, a small grass island close to the south called Black Rock is visible making the former rocks easy to position. On the starboard or north side are the Verde Rocks that are marked by a perch.

When Ringhaddy Sound opens upswing round to starboard and steer north. Keep clear of the southwest end of Islandmore as a single rock is situated approximately 50 metres offshore of a wooden summer house and just south of the jetty. Following the line of moorings avoids this.

Afterwards, it is advisable to favour the east side of the sound to avoid a spit that extends halfway across the sound from the western shoreline. The spit reaches in a southeastward direction from the point where you will see a stone building and jetty.

From here track up mid-channel avoiding the bays as they shoal. Likewise, take care not to foul on the moorings that fill the entire length of the Sound behind Islandmore. 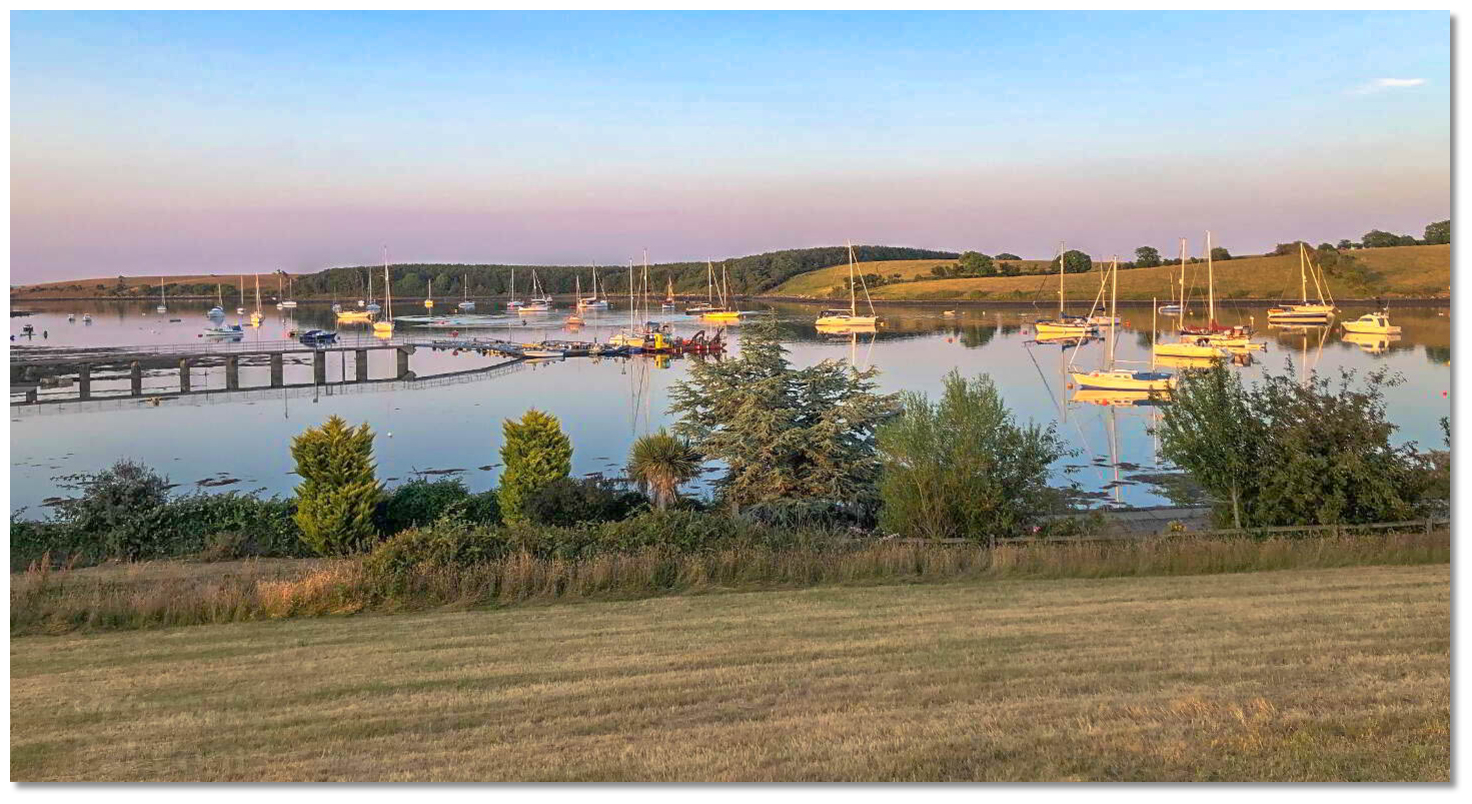 Holding is good in the deep waters of the sound if you get the anchor in. However with a bottom of rock and weed, this may be challenging, and it could also come loose in the alternating currents that run up to 3 knots. This makes it advisable to come alongside the pontoon and enquire if there is a spare mooring available. Although there are no official visitor moorings in the Sound, Club members are welcoming and may be able to identify private moorings for temporary use.

Visiting yachts from outside the Lough are welcome to come alongside the club pontoons for short periods, even for a day or two by arrangement. The pontoons have 1.8 metres or less at LWS with a bottom of soft mud.

There is an old stone pier that is 300 metres further north that is difficult to come alongside but may prove useful. The bottom of the quay is hard on the north side and dries at low water enabling a vessel to dry out here. The quay and entry road are in private ownership so road access is restricted.

The area between Pawle Island and the Black and Brown Rocks has an awkward seaway in wind-against-tide conditions. Ringhaddy Sound may also be entered and exited on its north side 400 metres west of Green Island.

This quiet and beautiful anchorage offers complete protection with all the resources of Ringhaddy Cruising Club, founded in 1975, immediately to hand.

The privately-owned old quay was most likely built in the early part of the 19th century. It is one of the best examples that remain from that time of a medium-sized quay in Strangford Lough. Islandmore is now inhabited all year round and has signs forbidding landing which is unfortunate.

Ringhaddy is another typically stunning location in this island-studded sea Lough offering a boatman another chance to enjoy some of the country’s finest scenery.

The area is remote from any village and as such there are no supplies available here. Ringhaddy club has a number of pontoons where water is available. Between the old quay and the pontoons, there are privately owned facilities for hauling out that should only be used in dire emergencies.

The Ringhaddy Cruising Club grounds are a secured area.

This quiet and beautiful anchorage offers complete protection with all the resources of Ringhaddy Cruising Club, founded in 1975, immediately to hand.

The privately-owned old quay was most likely built in the early part of the 19th century. It is one of the best examples that remain from that time of a medium-sized quay in Strangford Lough. Islandmore is now inhabited all year round and has signs forbidding landing which is unfortunate.

Ringhaddy is another typically stunning location in this island-studded sea Lough offering a boatman another chance to enjoy some of the country’s finest scenery.

These additional images feature in the 'How to get in' section of our detailed view for Ringhaddy Sound.