Located in the centre of Roaringwater Bay, Heir Island is immediately northwest of Sherkin Island and southwest of the mainland. The smallest of the three inhabited islands in the bay area, this is a secluded anchorage close to its popular east-facing and shoreward facing beach.


Located in the centre of Roaringwater Bay, Heir Island is immediately northwest of Sherkin Island and southwest of the mainland. The smallest of the three inhabited islands in the bay area, this is a secluded anchorage close to its popular east-facing and shoreward facing beach.

Set behind islands and the mainland, with rocky shoals breaking any seaway, the anchorage offers good protection from all but very strong southerly winds. Approaches to the general area, from the north end of Baltimore Harbour or directly from Long Island Bay, are unmarked, intricate and challenging. All of this requires careful navigation in settled conditions with good visibility.

A tolerable location with attentive navigation required for access.

This is off the beach where vessels normally anchor

The following River Ilen Entrance Initial Fix will set up a final approach:

Taking a mean tidal offset from Dover's tide, we expect your targetted date's associated local tide at Trá Bán to be:

Data based on an average tide is only accurate to within one hour, if you more precise times are required use the ISA tidal predictions, with Cobh offset +01:15.

. River Ilen directions to the anchorage are covered in the Oldcourt

Click the 'Next' and 'Previous' buttons to progress through neighbouring havens in a coastal 'clockwise' or 'anti-clockwise' sequence. Below are the ten nearest havens to Trá Bán for your convenience.
Ten nearest havens by straight line charted distance and bearing:
These havens are ordered by straight line charted distance and bearing, and can be reordered by compass direction or coastal sequence:
To find locations with the specific attributes you need try:

Heir Island, also known as Hare Island or Inis Uí Drisceoil, is the third largest of the archipelago of islands in Roaringwater Bay and the fourth-largest of Carbery's Hundred Isles, after Sherkin Island, Clear Island and Long Island. Trá Bán is a sandy stretch that faces the entrance to the River Ilen.

Best depths are off the northeastern shoreline where 2 metres LAT can be found about 150 metres out. 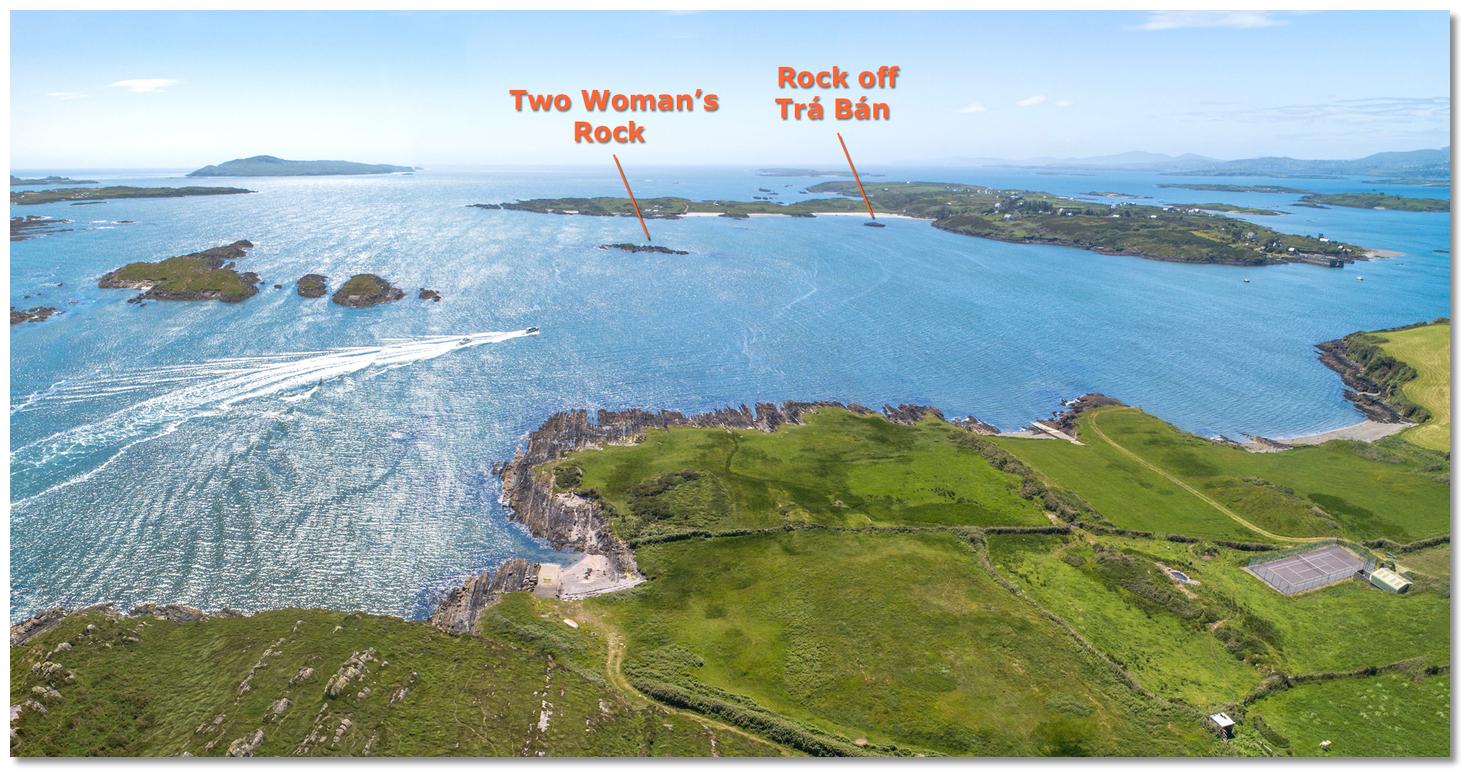 . Seaward approaches and run up The Sound, from Baltimore Harbour, are covered in the Oldcourt

River Ilen description as the anchorage lies off of its approach path. 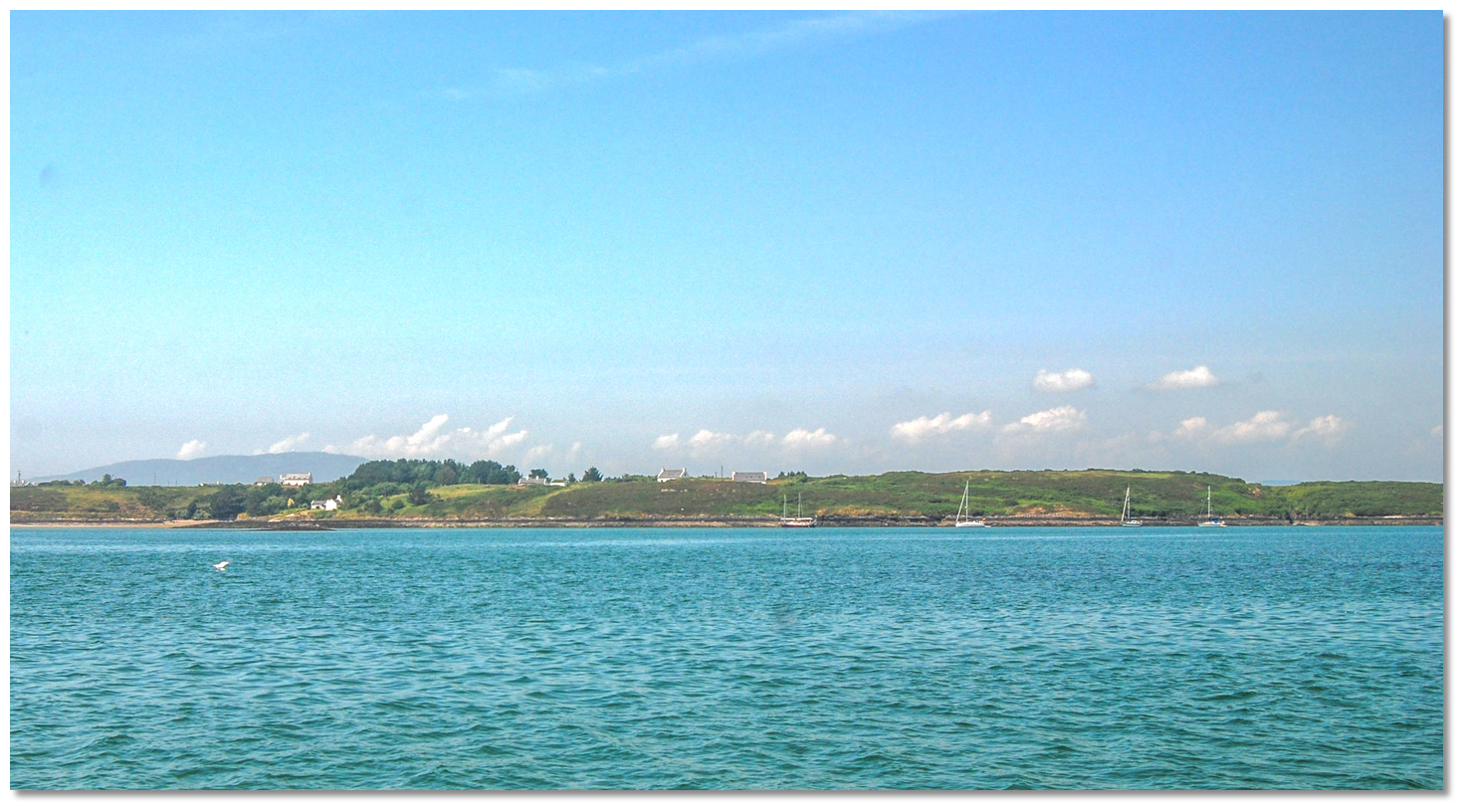 When abreast of Two Woman’s Rock prepare to break off this track but steer northwest to clear a shallow area with 1.5 metres over it that extends about 400 metres from Two Woman’s Rock. Once clear of this shallow area turn towards the headland that extends to the northeast of the beach and start to sound in. Do not steer to the centre of the beach as there are multiple rocks awash close south of a west bearing line off of the north face of a rock that is always dry and situated off of the beach. 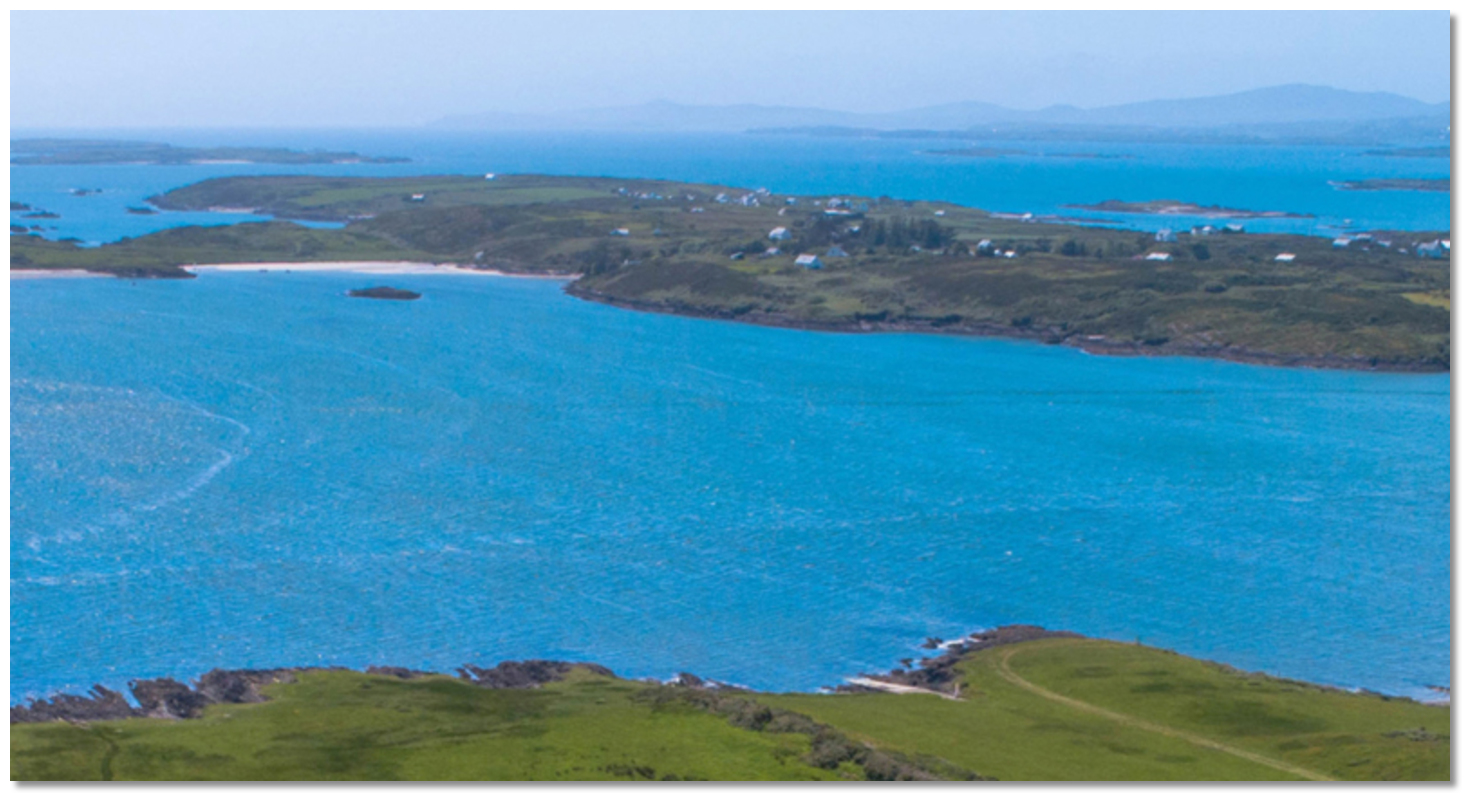 Anchor under the headland that extends to the northeast of the beach
Image: Michael Harpur

Anchor according to draft in mud and sand that offers excellent holding. Best water will be found keeping about 150 metres off the northeastern shoreline.

Land on the beach in the middle of the island or at the East Pier.

One of several Heir island beaches it is by some margin its best beach sheltered from the prevailing westerly wind. The beach is well used as an anchorage and landing point for leisure craft during the summer months. It is one of Heir Island's many wildlife preserves - see Heir Island (East Pier)

The island has two piers, and a shop whose location is in the main hamlet on the west side of the island, where fresh bread which is made on the island is available. Although the small island does not have a pub, it has holiday rentals, an art gallery, a sailing school, an outdoor activities camp, a permanent restaurant and an occasional restaurant located in the Sailing School. The permanent island restaurant is reputed to be very good and is by prior reservation only.

Heir Island is accessible by boat all year round by ferry. The main way to get to the island is via the island ferry that departs from Cunnamore point to the island's main pier 6 times a day, every 2 hours, from 8am to 6pm during the summer. Another ferry services Heir and Sherkin islands from Baltimore & Cunnamore throughout the Summer months of July and August.

Never an issue known to have occurred to a boat anchored off Heir Island.

One of several Heir island beaches it is by some margin its best beach sheltered from the prevailing westerly wind. The beach is well used as an anchorage and landing point for leisure craft during the summer months. It is one of Heir Island's many wildlife preserves - see Heir Island (East Pier)

These additional images feature in the 'How to get in' section of our detailed view for Trá Bán.