Set within the furthest recesses of the estuaries’ channels and within a lock, it is completely protected from all conditions. Chichester Harbour's channels are well marked making access straightforward night or day in most conditions but the final approaches to the marina can only be made on a sufficient rise of the tide.

This is situated on the eastern side of the lockgate entrance.

Taking a mean tidal offset from Dover's tide, we expect your targetted date's associated local tide at Birdham Pool Marina to be:

entry for the approaches to Chichester Harbour, directions for Chichester Channel and Dell Quay

for the run up beyond Itchenor.

Click the 'Next' and 'Previous' buttons to progress through neighbouring havens in a coastal 'clockwise' or 'anti-clockwise' sequence. Below are the ten nearest havens to Birdham Pool Marina for your convenience.
Ten nearest havens by straight line charted distance and bearing:
These havens are ordered by straight line charted distance and bearing, and can be reordered by compass direction or coastal sequence:
To find locations with the specific attributes you need try: 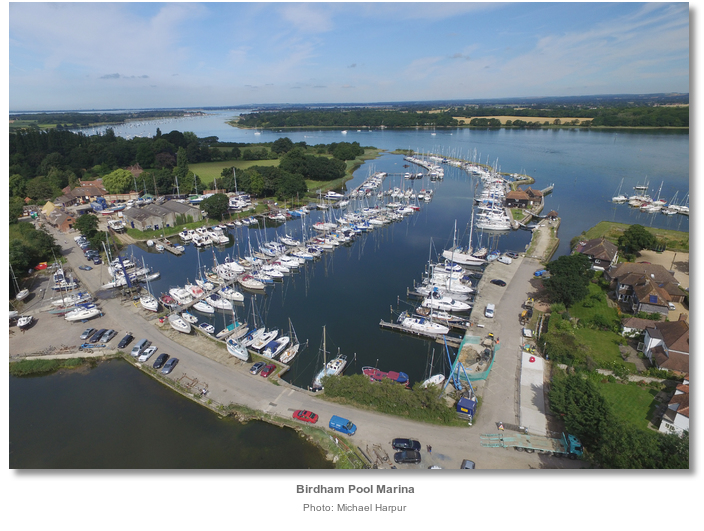 Birdham Pool Marina is a small rural marina with 249 pontoon berths located about 4½ miles within the entrance to Chichester Harbour. Situated on the site of a former tide mill pond on the east side of the shallow Chichester Lake, its position behind a lock gate means that final approaches will most likely require a rise to provide adequate draft for access. The marina is located within 3 miles of the cathedral city of Chichester. 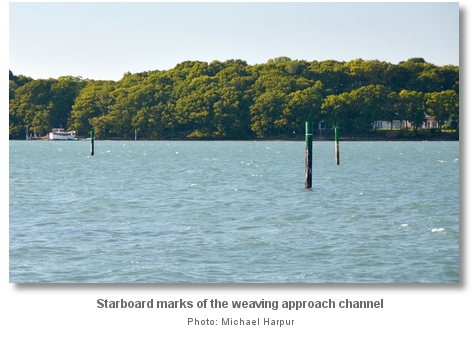 Birdham Pool derives its name from the conjunction of bridd and hamm meaning ‘homestead or enclosure frequented by young birds'. This name has very slightly softened through the centuries and was first recorded as Bridham, in 683, and Brideham in the 1086 Doomsaday Book. 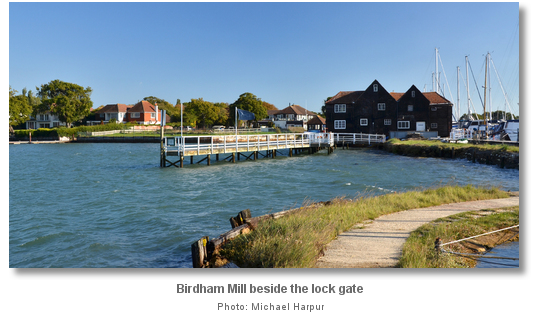 Birdham’s history however goes back much further than this with evidence of a prehistoric Bronze Age settlement in the area. It is believed that two Roman roads met at the present Bell Lane junction. One road led from there to Chichester Harbour and then on to Bosham via a ferry or a ford. In 683 various Parishes on the peninsula south of Chichester, including Birdham, were gifted by the Saxon king Caedwalla to St. Wilfred and it was in these records that Birdham received its first mention. The later Domesday Book recorded that the area had two fisheries and a mill.


The present Birdham Mill has nothing to do with this ancient Norman mill. This mill dates from 1768 and had two tidally operated water wheels. The flood tide was trapped in the pond and on the ebb, after a good head of water had been impounded, the outgoing water could turn the mill wheels for up to three and a half hours. Tidal mills were expensive to build, but the power was constant and reliable even though they could operate only for up to eight hours in every tidal day. But it was hard work and lead to miller working odd hours to synchronise with the tidal cycle. 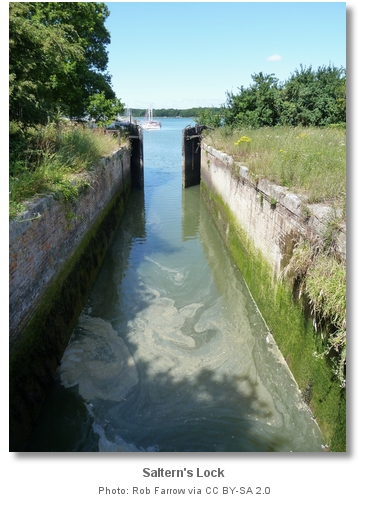 In 1935 the long established milling family of Farne ceased operations and sold their house at Court Barn, the Mill and all its land to Captain H.R.S. Coldicott. In doing so they brought to an end the last tidal mill in Sussex. Coldicott enclosed the outer Mill Pool and built lock-gates into the wall to make a yacht basin for small boats. His marina opened in 1937 and it is now believed to be one of the earliest marinas in the country. The old mill building still stands with the lock beside it.


Between the locks of Birdham Pool and Chichester Marina, scarcely 100 metres from Birdham pool, is ‘Salterns Lock’ the lockgates of the disused Chichester Canal. In 1580 the Cicestrians, as the citizens of Chichester are known, petitioned the Crown to remedy the cities disadvantage of its distance from the sea. Dell Quay was its port at the time and mention was also made of the fact that there were neither storehouses nor a boarding house there. In response to the complaint, a 1585 act was passed that would allow the construction of a cut linking Chichester with the sea `to bring the port unto the city. But this ambitious project was not to be realised for another 250 years and would be a short lived success.


Work only began after a further 1818 act that would provide the grounds required for the ‘Portsmouth & Arundel Canal’. The canal was conceived in a time of hostilities with France and part of a larger scale plan to provide a secure inland canal route from London to Portsmouth. It was opened in 1823 allowing barges to travel safely and comparatively quickly from Portsmouth through Langstone and Chichester harbours to Birdham and then onto London. Larger vessels could spur off to Chichester, at Hunston, that unlike the rest of the canal was built large enough to carry boats of up to 100 tons. However before the entire route was completed the project was already doomed to failure. 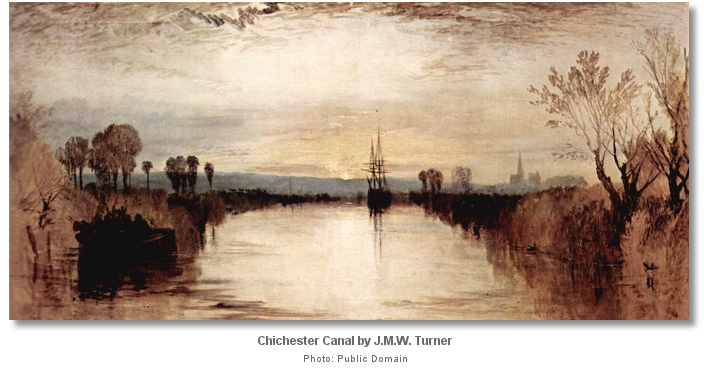 The war with France had ended and larger and better ships meant that the coastal route was again the more convenient and cheaper option. Worse in 1846 the line from Brighton to Chichester was opened effectively obsoleting the greater part of the canal almost immediately. By 1847 the canal, apart from the Chichester section, had fallen into disuse. The trade in the section between Salterns Lock and the city of Chichester also dwindled and it was finally shut in 1906. The remains of the canal is now rather overgrown with stationary houseboats.


Today Birdham village is somewhat spread out with plenty of desirable harbour-side houses. Stunning harbour views make Birdham one of the more interesting places to walk around on the Manhood Peninsula - the flat expanse of land south of Chichester that pushes out into the sea at Selsey Bill. For a longer walk the Canal can be followed all the way to Chichester, and there is a pleasant circular walk up to Dell Quay passing through the wooded area of Salterns Copse. 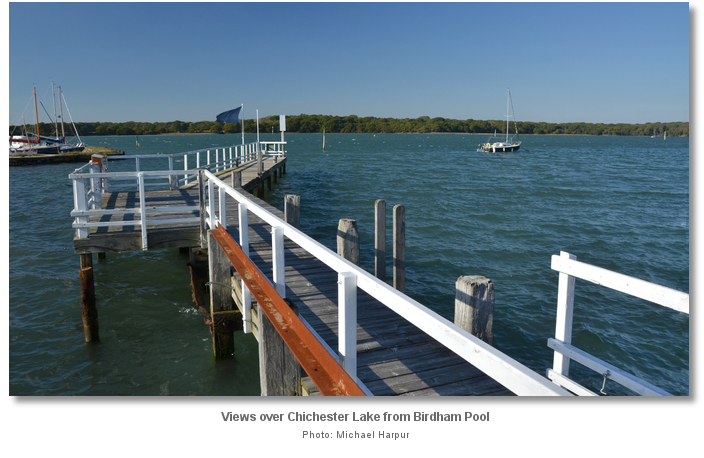 The marina however is Birdham’s most notable feature. With the Old Mill building still standing next to the Lock and the traditional lock gates at its foot the 'Pool' still retains a handsome sense of antiquity. The marina ranks by many as not only the oldest but also the prettiest in the country. It is also a TransEurope Marina. Visitors who have a homeport belonging to the TransEurope Marinas network will have the benefit of a 50% discount off berthing fees for up to 5 days.

These additional images feature in the 'How to get in' section of our detailed view for Birdham Pool Marina. 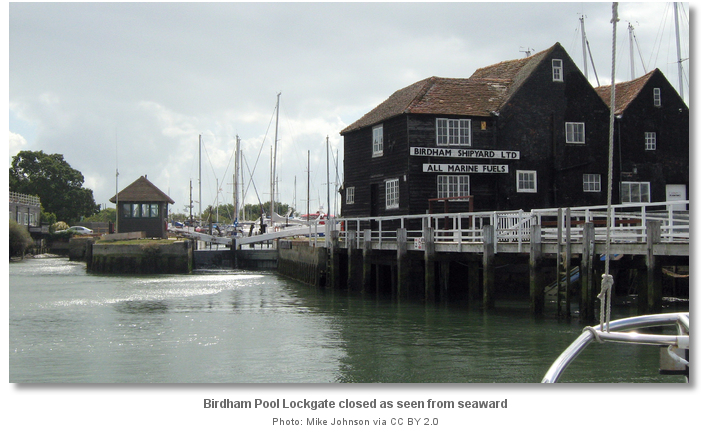 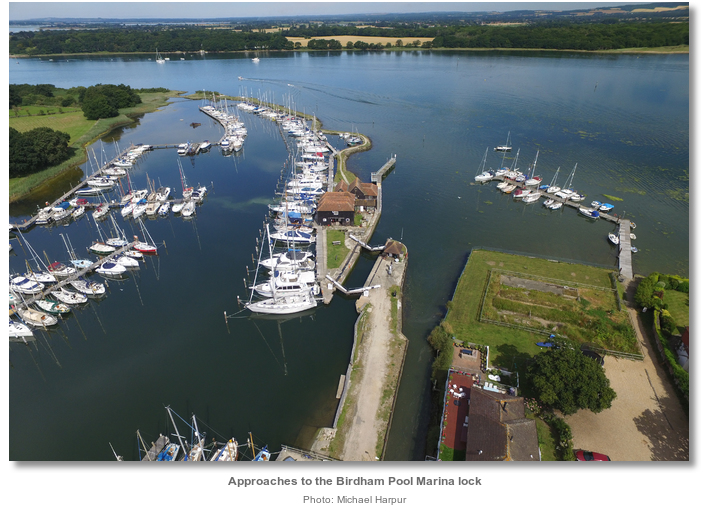 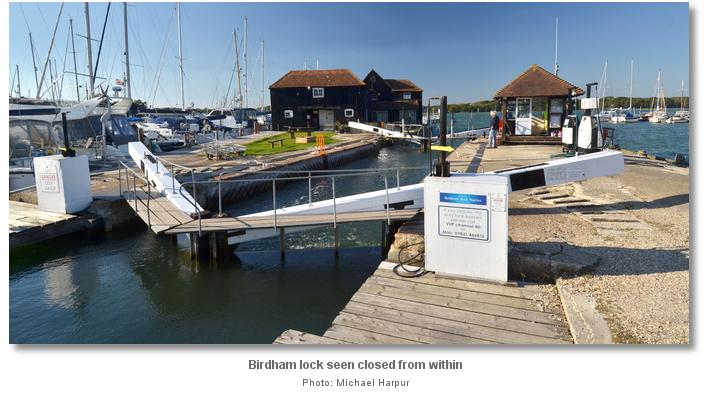