Sparkes Marina is located immediately within Chichester Harbour which is situated on the south coast of England. It is a small but very convenient marina.


Sparkes Marina is located immediately within Chichester Harbour which is situated on the south coast of England. It is a small but very convenient marina.

Tucked inside the large natural harbour and up its own dredged entrance channel the marina offers complete protection from all conditions. Although the harbour is entered over a moderately deep sand bar, and between sand banks, it is very well marked and straightforward. The marina is one of only two marinas in Chichester Harbour that are accessible at all states of the tide.

The marina is small, relatively confined and can get overwhelmed in season. It is advisable for visitors to call and make berthing arrangements in advance.

This is the north most point of the marina wall near the fuel berth.

Taking a mean tidal offset from Dover's tide, we expect your targetted date's associated local tide at Sparkes Marina to be:

entry for the approaches to Chichester Harbour, directions for Chichester Channel.

Click the 'Next' and 'Previous' buttons to progress through neighbouring havens in a coastal 'clockwise' or 'anti-clockwise' sequence. Below are the ten nearest havens to Sparkes Marina for your convenience.
Ten nearest havens by straight line charted distance and bearing:
These havens are ordered by straight line charted distance and bearing, and can be reordered by compass direction or coastal sequence:
To find locations with the specific attributes you need try: 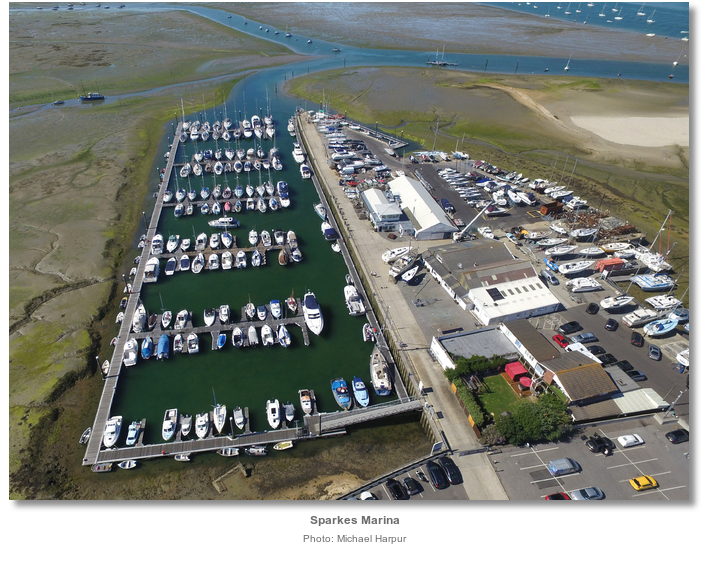 Sparkes Marina is located in the southwest corner of Chichester Harbour, immediately within the entrance and on the south-eastern tip of Hayling Island. It is at the end of its own dredged channel that makes it one of the two marinas in the harbour that are accessible at all states of the tide. The marina however is relatively small and tight when compared to others in the harbour. It caters for 140 berths with some being reserved for visitors. Though small it can nevertheless accommodate vessels of up to 20 metres in up to 2.5 metres when berths are available. Use the 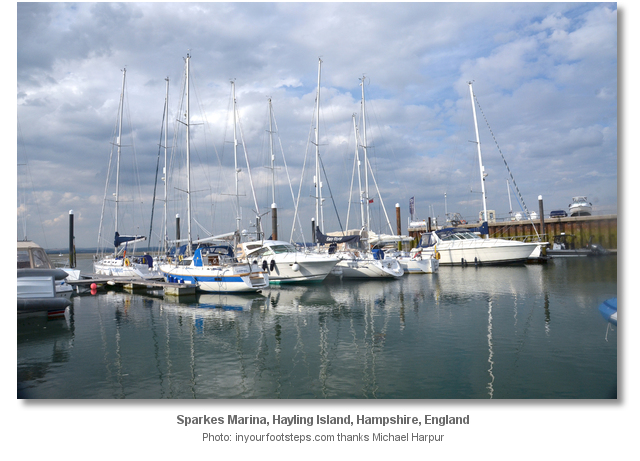 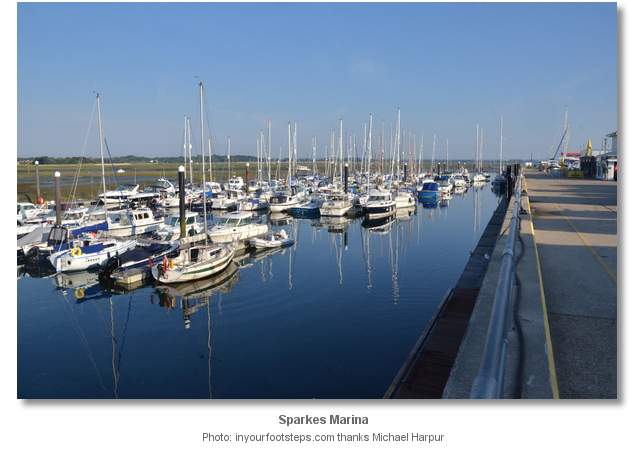 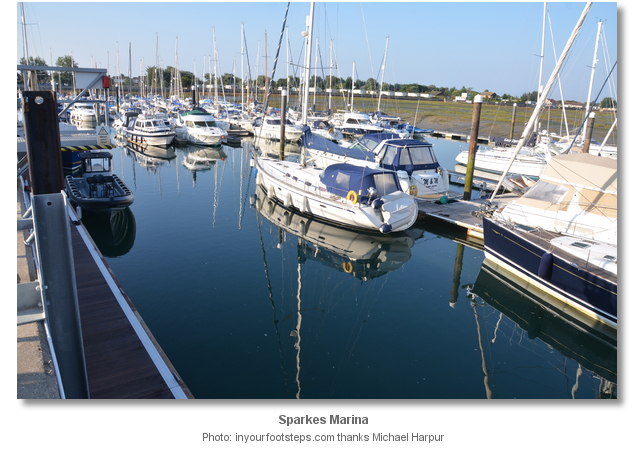 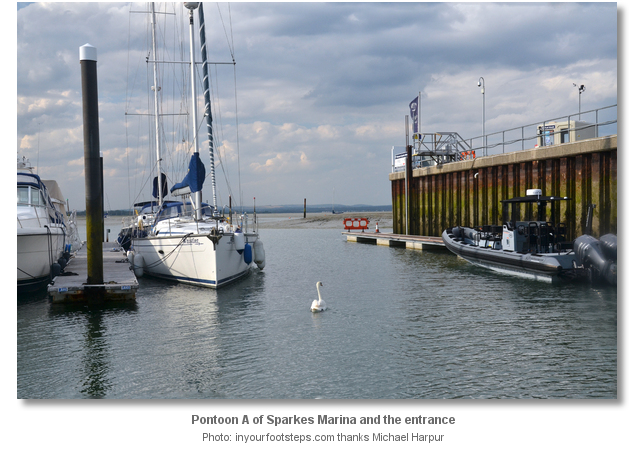 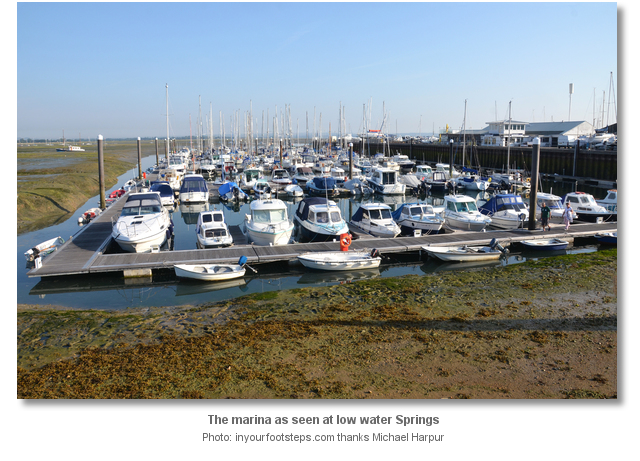 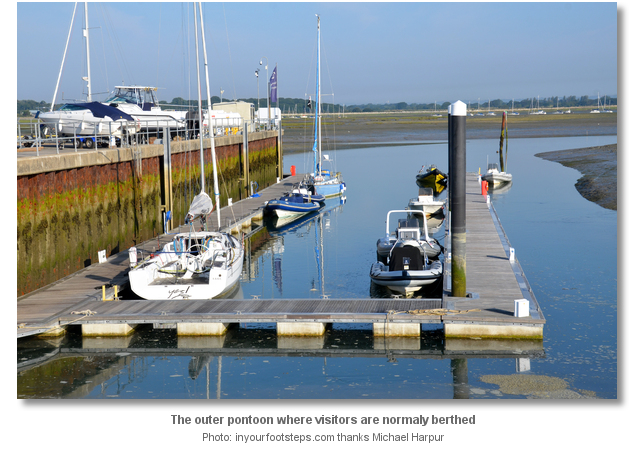 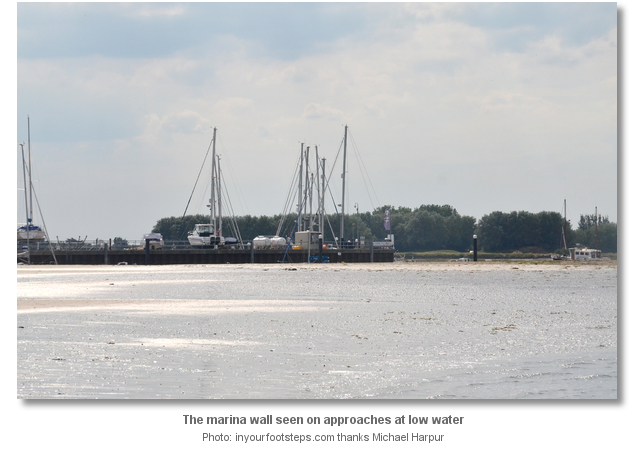 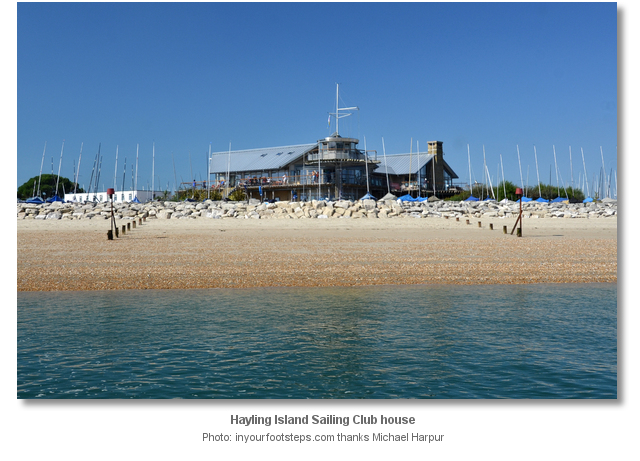 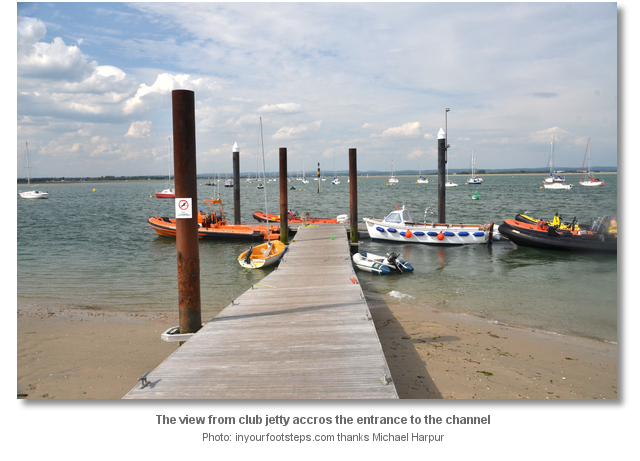 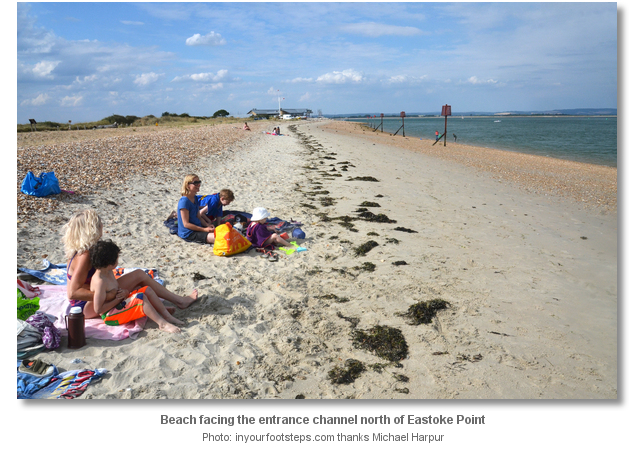 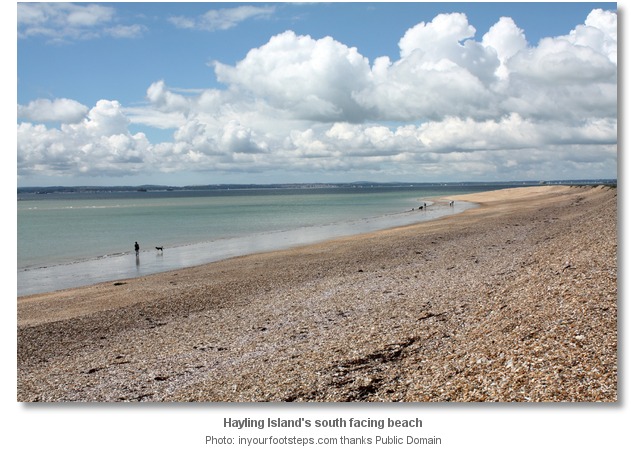 Sparkes Marina is owned and operated by Marina Development Limited (MDL) based in Hamble Hampshire. The company owns and manages eighteen coastal marinas and boatyards in England which includes another marina in Chichester Harbour at Northney. It has other facilities in France, Italy and Spain and the company provides its berth holders with freedom to roam between their extensive ranges of facilities when space is available. Sparkes Marina is the most seaward berth on Hayling Island. 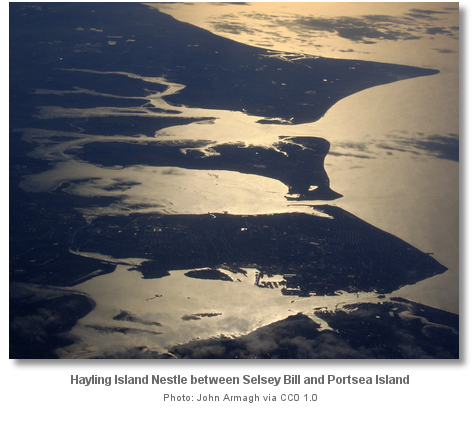 Lying between the harbours of Langstone and Chichester, Hayling Island is a true island, completely surrounded by sea. It measures about 6.5 kilometres or 4 miles north to south and is nearly the same in breadth at the south. The flat island has an irregular form being shaped like an inverted ‘T’ and rises no more than 6 metres (20 ft.) above sea level at its highest point. Although small, Hayling Island has a surprisingly rich and varied history, both modern and ancient.


The Island derives its name from the conjunction of the name Haegel with inga and ég. This name means ‘settlement of, or followers of, or island of the family of a man called Haegel’. Haegel was a Saxon chieftain who claimed the island as his principle area of settlement after the Romans left. The name Haegel very slightly softened down through the centuries and was first recorded as Heglingaigce in 956, Halingei in the 1086 Doomsaday Book, Hailinges in about 1140, to its present ‘Hayling’.


The island’s inhabitation however goes back to Neolithic times though there is little evidence of permanent settlements here. The British Museum has a polished axe-head and two or three arrowheads that were found on the island and dated to 8,000 to 2,500 BC. Hoards of ‘palstaves’, a type of early bronze axe, have been found at North Hayling and at Gable Head. These are believed to have been ritualistic burial placements during the later Bronze Age. An iron-age shrine discovered in the north of Hayling Island was later developed into a Roman temple in the first century; the continuance of worship on the site reflected the religious importance bestowed to islands during pagan times. On the south eastern side of the Island is the commanding Tourner Bury earthwork hill fort that is considered to fall across these periods. Unfortunately, the Saxons and Vikings destroyed all the Roman buildings and left very little of any significance for historians themselves. 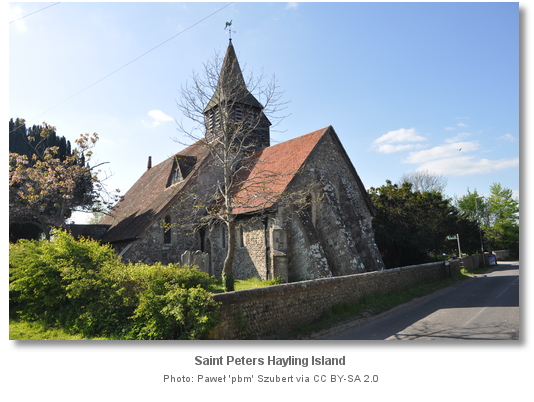 Domesday recorded Hayling being divided between three owners, the King, the Abbey of Winchester and a French monastery that had moved from Caen in Normandy. The Jumièges monks from Normandy commenced the construction of Northwode Chapel in their section in about 1140. Over time it became the present St. Peter’s Church with an early settlement on its northern side. A serious fire in 1757 destroyed much of this early village, though some farm buildings survived. Saint Peter’s Church is the oldest surviving church today, and one of the loveliest buildings on the Island. With its flint and stone, with shingled broach spire, St. Peters stands as a fine example of a typical English village church of the Norman period. It has been claimed that its three bells, cast in about 1350, have one of the oldest peals in England.


Not so lucky however was Hayling Island’s lost priory that fell victim to some of the island’s most challenging times. It is believed to have been located in the ancient Norman moated site where the 1777 Manor House stands today. The priory church, along with much of the southern edge of the Island and Selsey Bill, was destroyed by flooding in the 13th or 14th century. After the disaster St. Mary's Church, constructed on the Island’s highest point, became the central church on Hayling. The flooding was followed by the ‘Black Death’, the bubonic plague pandemic, that killed as much as half the population of England. It was also a time of national emergency when the island needed to be defended against attacks by the French. 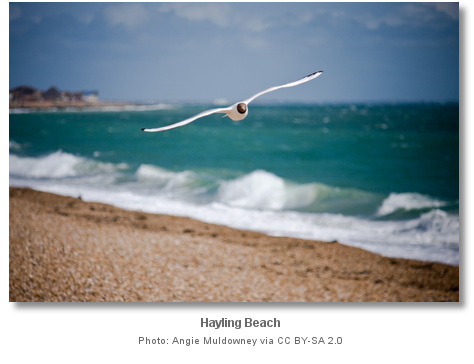 The development over the past two centuries has been largely that of a seaside resort. By 1887 the Hayling Railway Company brought excursions to Hayling’ sandy beaches within the reach of many. These day excursions, in turn, brought many who would in the coming decades buy inexpensive plots of farming land to build holiday homes. By 1935 there were new estates being built that were specifically advertised as holiday homes by the sea. With its wonderful beach and train service Hayling Island found itself at the forefront of the pre-war holiday camp boom and it hosted three complexes one of which remains to this day. During the 20th century Hayling changed to become a desirable holiday location, not purely for day-trippers, and finally a place to live close to the sea.


The islands combination of sail and surf remarkably led to windsurfing being invented here in the nineteen fifties. Peter Chilvers, who as a young boy on Hayling Island, assembled his first board combined with a sail in 1958. In 1982 in a landmark design case the British courts recognised ‘prior art’ by judging Peter Chilvers incorporated all the elements of the modern windsurfer based on film footage he presented from the time. The courts found that later innovations were "merely an obvious extension" and upheld the defendant's claim. Today Chilvers’s sport is very popular on the south beach along with kitesurfing of which Hayling is the south’s new hotspot. The island set a Guinness World Record for the longest line of kite surfers and holds the record for the longest line of stand-up paddle boarders. 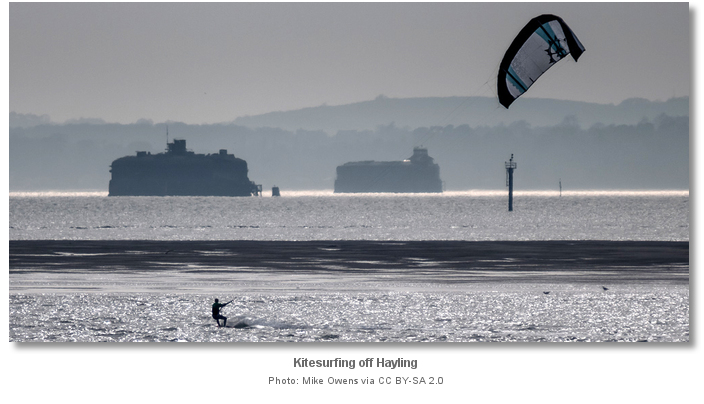 Today the island remains a popular holiday resort with many facilities and four miles of Blue Flag beach at Beachlands. The natural beach was predominantly sandy but in recent years it has been mechanically topped with shingle dredged from the bed of the Solent in an effort to reduce beach erosion and reduce the potential to flood low lying land. Backed by grassy dunes, Victorian beach huts, the unspoilt nature of Hayling Island waterfront sets it aside from many other larger resorts. Children will enjoy the Hayling Seaside Railway that runs from Beachlands and along the beach to Eastoke Corner which is replete with all the typical amenities of a family seaside resort.

From a sailing perspective Sparkes Marina offers vessels a very convenient all-tide berth on the threshold of Chichester Harbour. It is the ideal point of arrival to land or refuel before exploring the dozen or so widely varying locations within this Area of Outstanding Natural Beauty. It offers a family boat two wonderful beaches, with the beach overlooking the entrance between Hayling Island Sailing Club and Eastoke Point being an easy walk.

These additional images feature in the 'How to get in' section of our detailed view for Sparkes Marina. 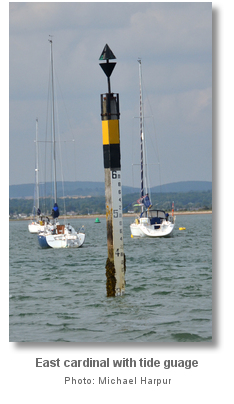 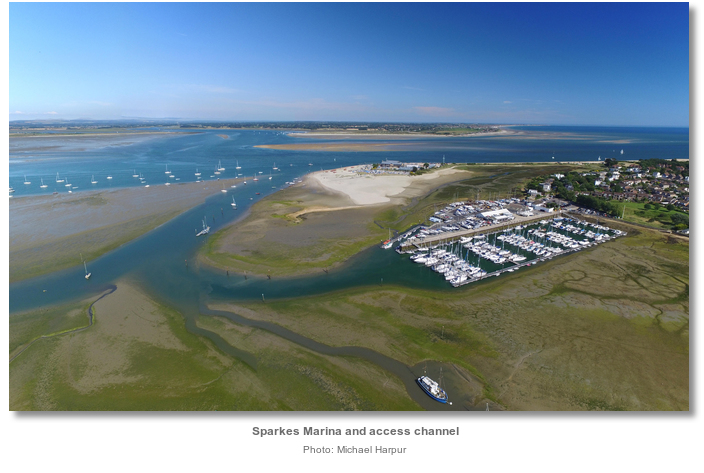 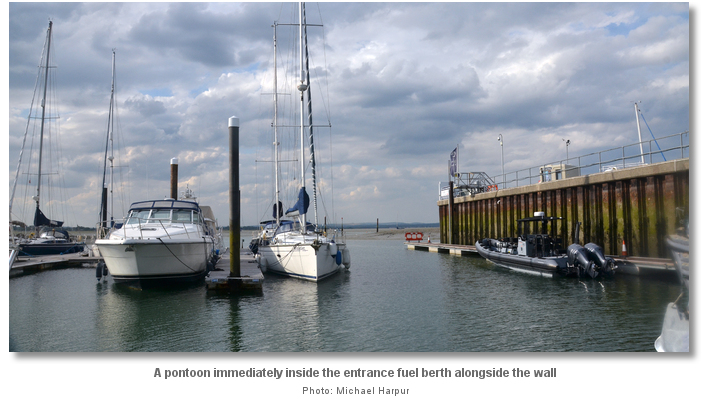