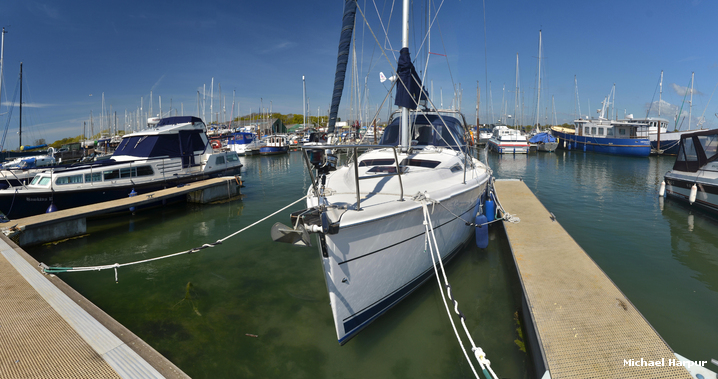 Set within the recess of the large natural harbour the marina offers complete protection from all conditions. Although Chichester Harbour is entered over a moderately deep sand bar, and between sand banks, it is very well marked and straightforward. However the path to the marina and the marina itself dries requiring vessels to work the tides in daylight.

The marina is small, relatively confined and tidal. It is advisable for visitors to call the yard to seek advice and berthing arrangements in advance.

This is the position of the first and southeaster pontoon head.

Taking a mean tidal offset from Dover's tide, we expect your targetted date's associated local tide at Hayling Yacht Company to be:

entry for the approaches to Chichester Harbour, Northney Marina

Click the 'Next' and 'Previous' buttons to progress through neighbouring havens in a coastal 'clockwise' or 'anti-clockwise' sequence. Below are the ten nearest havens to Hayling Yacht Company for your convenience.
Ten nearest havens by straight line charted distance and bearing:
These havens are ordered by straight line charted distance and bearing, and can be reordered by compass direction or coastal sequence:
To find locations with the specific attributes you need try:

Hayling Yacht Company is a family run boatyard located within a bight in the eastern shoreline of Hayling Island on the west side of Chichester Harbour. It is at end of a shallow channel that is only accessible on a rise of the tide. It has a small 116 berth marina in front of the yard that entirely dries at 3.2 metres.

The facility can nevertheless accommodate visiting boats of up to 18 metres in length provided they have moderate draft, can take to the mud, and are prepared to work around the tides to gain access. Those intending on staying here should make berthing arrangements in advance and take directions from the yard office on P: +44 23 9246 3592. Use the 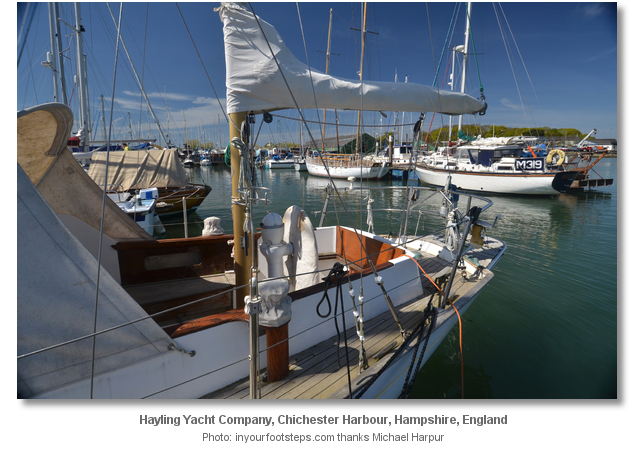 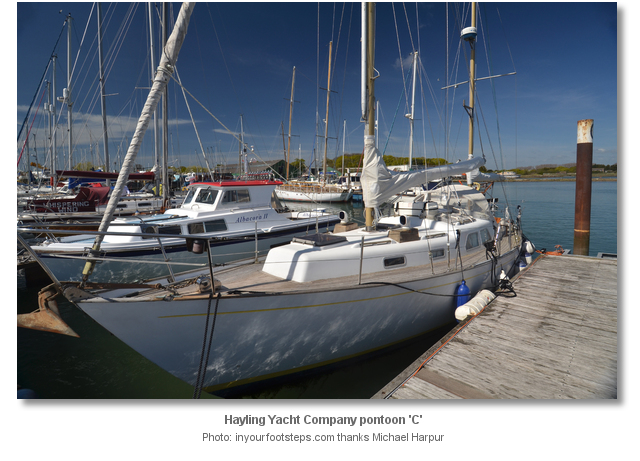 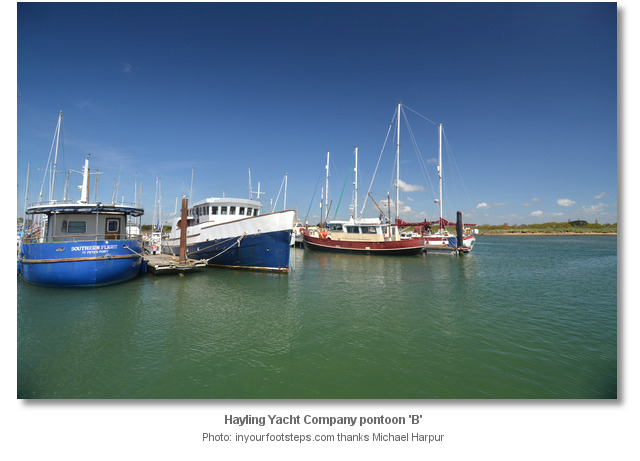 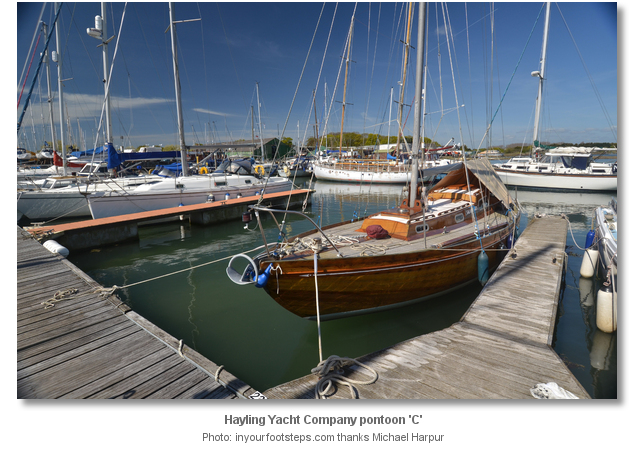 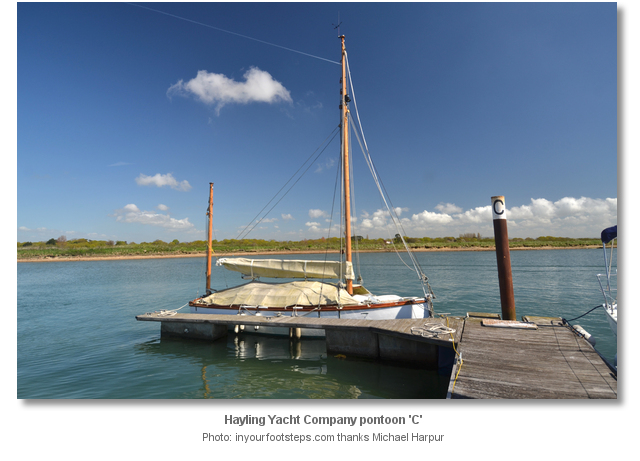 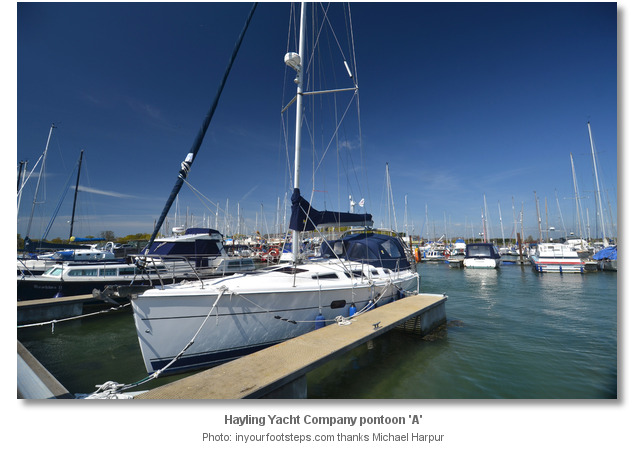 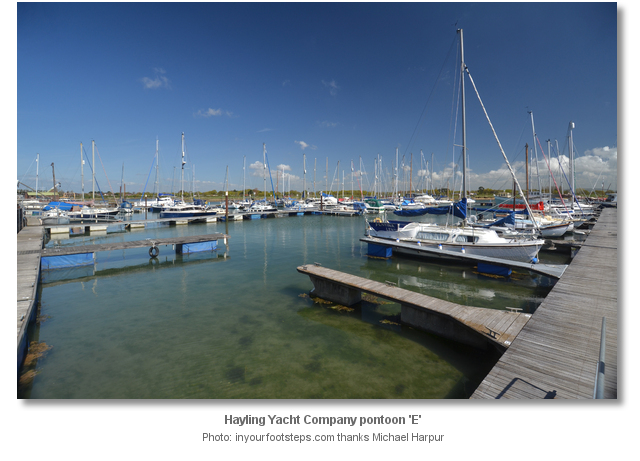 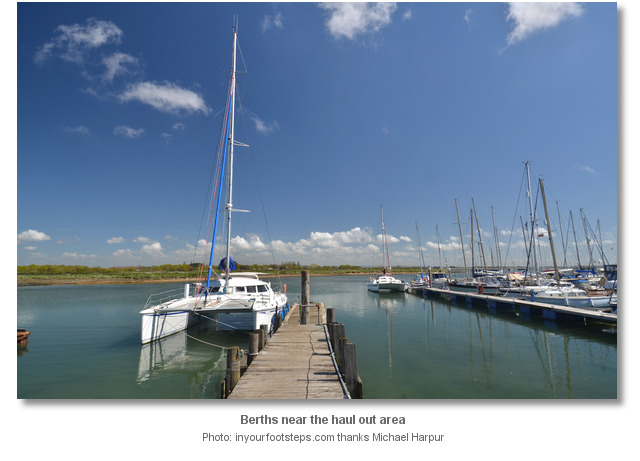 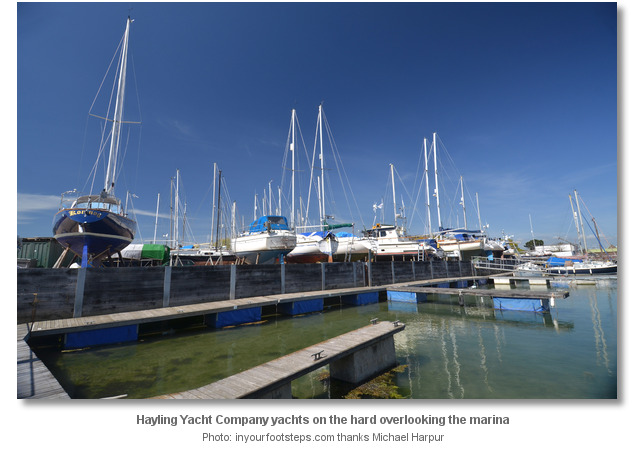 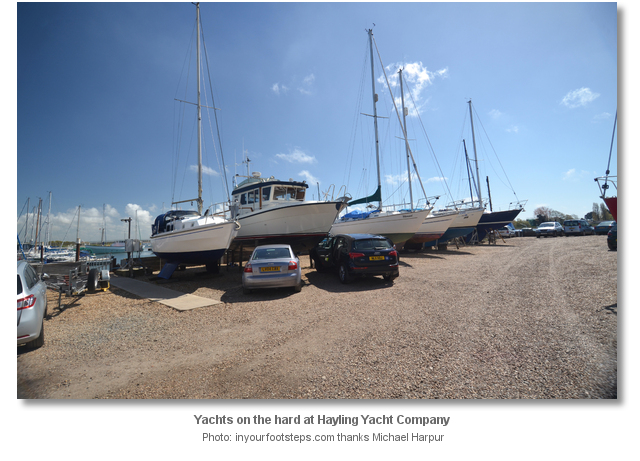 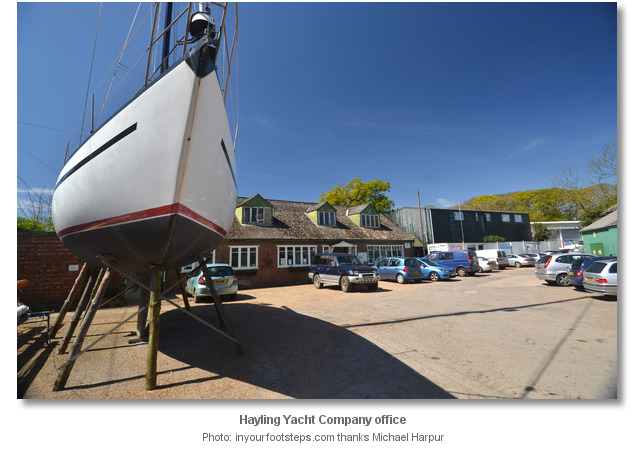 The Hayling Yacht Company is a family owned business that has served sailing in the Solent since 1935. The industrial use of its site however goes back much further than this. 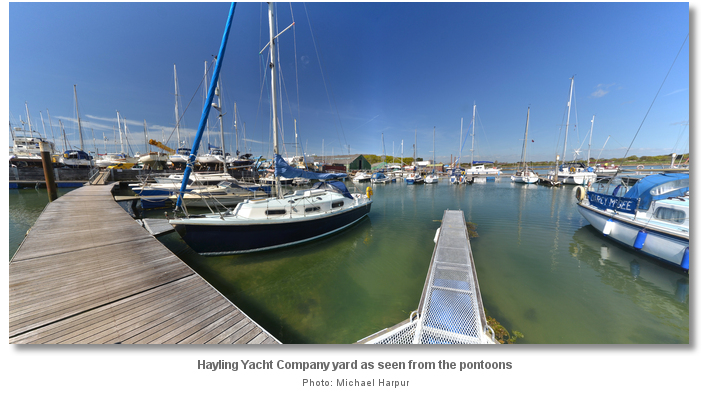 Mill Rythe received its name from the former Hayling Tide Mill that was located here. The mill was recorded as being operational in the 13th century and was used continually up until the late 19th century. Tidal mills operated by trapping the flood tide in a pond. Then on the ebb, after a good head of water had been impounded, the outgoing water could then turn the mill wheels for up to three and a half hours. The mills harness the constant rise and fall of the tidal cycle by impounding a head of water in a mill pond behind a sluice gate and then releasing its energy to turn the mill wheels. Compared to wind mills they were expensive to build and could only operate for seven to ten hours each tidal day. But the power was constant and reliable which led to their development in this sheltered recess of the harbour. Although now lost, the form of the mill pond survives, as does the dam at its south-eastern end. The quay that now servers the Hayling Yacht Company was formerly that of the mills'.


There are a number of further significant sites of both archaeological and historic interest in the surrounding area. The most significant being the Tourner Bury Iron Age hillfort that occupying the raised tongue of land that extends between the minor tidal inlets of Mill Rythe and Mengham Rithe to the south. From here the fort commanded the western part of the entrance to Chichester Harbour.

Tourner Bury was first documented in AD 1518 as land called Tornors or Tor Shore the land of William de Tornore. The structure of the fort was one of a raised edge, or wall, surrounding a depression. At its greatest it was 230 metres in diameter and about half a mile in circumference with an area that covered some 2.6 hectares. It was entered from the west via a single entrance and stood to a height of some 4 metres. Excavations produced Roman pottery and material from a hearth and, most unusually, there was a temple on the site.


Despite is scale and features Tourner Bury is little recorded. Its precise history is not known today and it seems to be a peripheral area. There is evidence that the fort is Stone Age but some believe it was adapted to be part of a Romans cordon of nine coastal and estuarial forts. These stretched from the Solent to the Wash with Tourner Bury filling in the gap between Portchester and Pevensey. Unfortunately the Saxons and Vikings destroyed the Roman buildings, and left little themselves of any significance, with the exception of a font in St. Mary’s Church located 20 minutes’ walk from the marina. 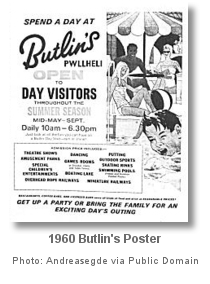 St. Mary’s Church has many features worthy of note. The church stands on the Island’s highest point at little more than six metres above sea level. Built mainly in the early thirteenth century from imported stone it adheres very much to the standard design of churches of its era. Yet upon closer examination the walls will be seen to have been constructed from a mortar of local shells and beach pebbles. It became Hayling’s central church after flooding claimed the now lost priory church along with much of the southern edge of the Island in the 14th century. The church features two interesting fonts. The oldest is a Saxon stone basin with interlacing patterns that was excavated from a site near the vicarage in the nineteenth century. The other is a much squarer Norman font of less elaborate design. Outside there is an ancient yew that dominates the church yard. The tree is believed to be one of the oldest in the country with a circumference of some nine metres. Although estimates as to its age vary, they range from over a thousand to nearly two thousand years old. Interestingly an original set of stocks and whipping post that were housed in the church yard have now been removed to Havant Museum.


The one major 20th century development in this area was the pre-war construction of Warner Brothers 'Sunshine Holiday Camp', now Mill Rythe Holiday Village, on Pound Marsh, close to the marina. With its wonderful south facing beach and train service Hayling Island was at the forefront of the pre-war holiday camp boom. Building started on the site of a farmhouse in 1938 but was not finished by the outbreak of World War 2, though in the latter stages of the war it hosted the Royal Marines. 'Sunshine' opened its doors to the public in the 1940’s, owned by Freshfields, a local management team who were later bought out by Pontins, one of the biggest names in leisure and tourism. It was in turn acquired by Warners when it became known as ‘Mill Rythe Holiday Village ‘and operated as Butlins from 1973. The BBC shot scenes for the popular sit-com ‘Hi Di Hi’ here and the movie ‘Confessions from a Holiday Camp’ was entirely filmed at Mill Rythe. It is currently operated and owned by the independent "Mill Rythe Holiday Resort" company. 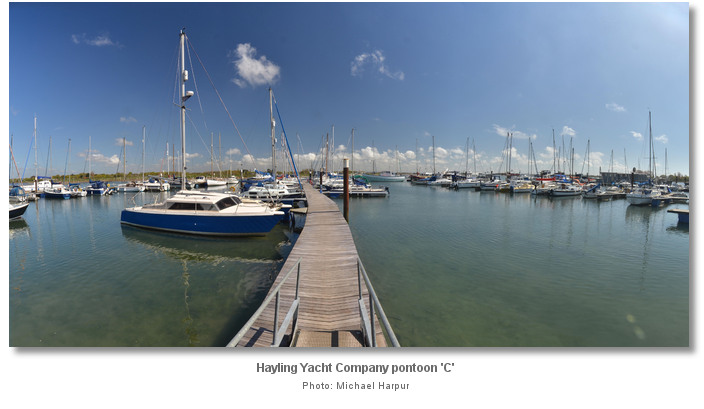 From a purely sailing perspective Hayling Yacht Company is best suited to a shallow draft vessel that can take to the mud and one that is sailed by a mariner who is happy to work the tides. It is an excellent location to bring a vessel in to attend to almost any repair or engineering work. Likewise, sited in the centre of the island, it makes for a great point of departure to explore Hayling Island as a whole.

These additional images feature in the 'How to get in' section of our detailed view for Hayling Yacht Company. 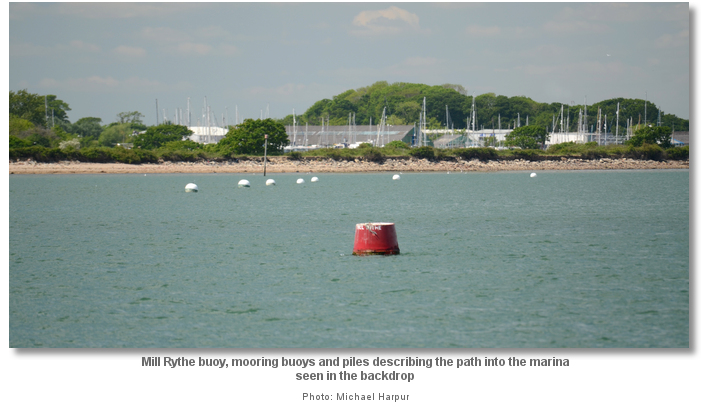 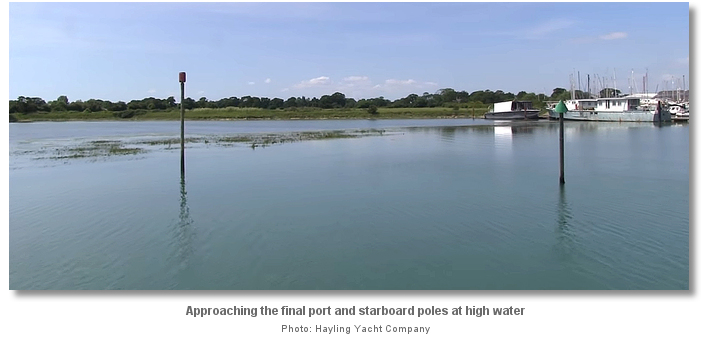 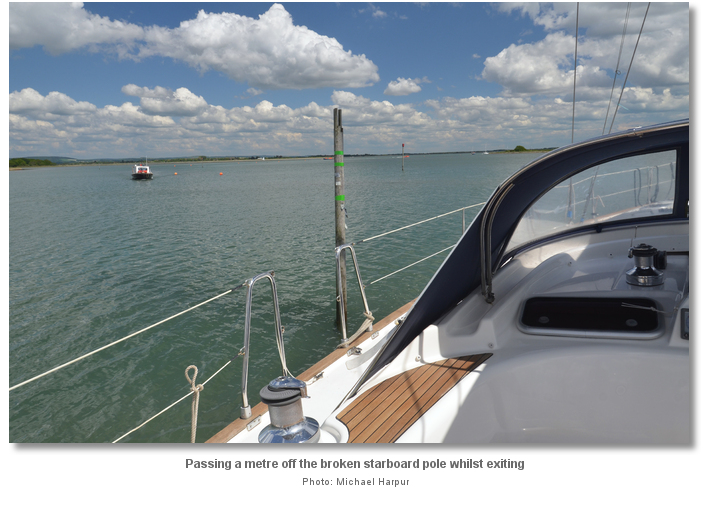 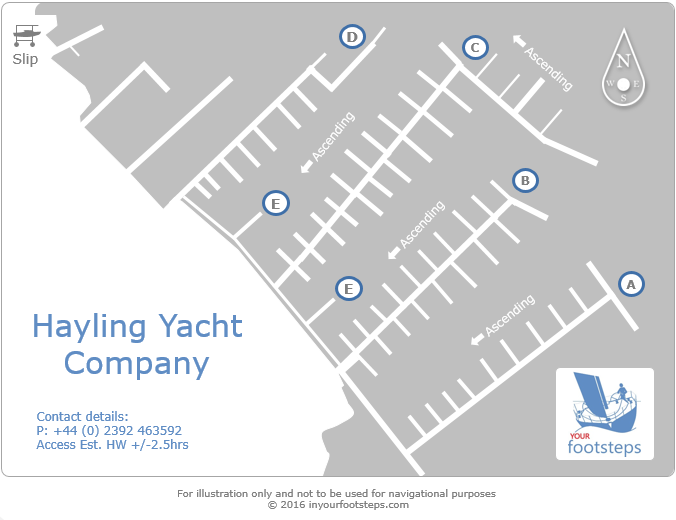