This is the short cut around the Dingle Peninsula taking a route inside the Blasket Island Group. The route utilises Blasket Sound that occupies the space that lies between the north eastern end of Great Blasket Island and the mainland shore.

Blasket Sound is a very attractive option for a leisure craft passing north or south along this coastline as it cuts at least twenty miles off any passages between Valentia and the River Shannon. It is also very easily navigated being, at its narrowest point, ½ mile wide and having the benefit of a natural leading line on the mainland’s coastal features. This makes daylight pilotage through the sounds fairway very straightforward and it provides a convenient route that avoids the extensive rocks and shoals that lie to the west of Great Blasket.

In reasonable weather, with fair wind or tide, Blasket Sound is the preferred leisure boat passage. But, in unsettled weather or at night, with its exposed position, uneven bottom and strong tides, it is best to pass to the seaward of the island group and its dangers. Likewise, its tidal streams can be confused and unpredictable at times so a vessel taking this route should be able to avail of reliable engine.

Today's summary tidal overview for this route as of Monday, December 6th at 07:57. The speed of the tidal streams in the main channels varies but is generally about 1 to 3 kn that can cause occasional overfalls and eddies. As such it is advisable to make a transit with a favourable tide or at least before it reaches its maximum rate.

Tides in the Blasket Sound turn in line with the channels. The flood streams northward commencing at HW Dover -0120 (Cobh +0430), and ebb streams southward commencing at HW Dover +0440 (Cobh -0035). The tide turns approximately half an hour ahead of the local HW and LW which is approximately Cobh -0110. Sustained southerlies make the flood run for longer and stronger.

Three miles long, less than ½ a mile wide, and lying in a northeast direction, Great Blasket Island is the largest of the Blasket group. It resides a mile to the west of Dunmore Head which is the nearest point of the mainland. The island rises from a narrow base to the height of 289 metres at its highest point, at Croagmore, and is very steep presenting a wall of vertical cliffs along its northwest side. 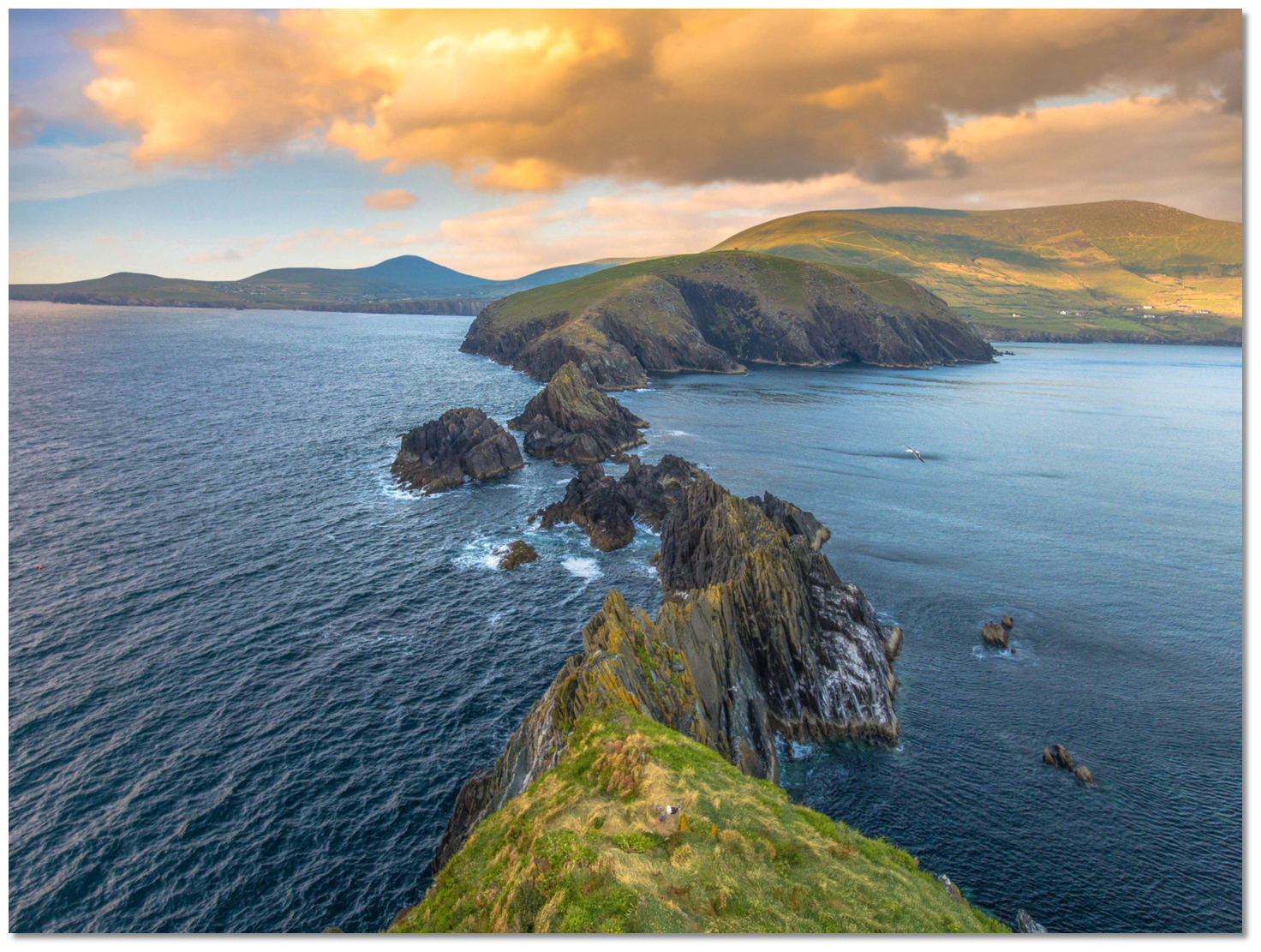 The channel is then reduced to less than ¾ of a mile in width by a remarkable narrow strip of rock that extends from Dunmore Head to terminate on its western side by a 44 metres high conical rock called the Lure. From a short distance, this strip of rock appears as an island. 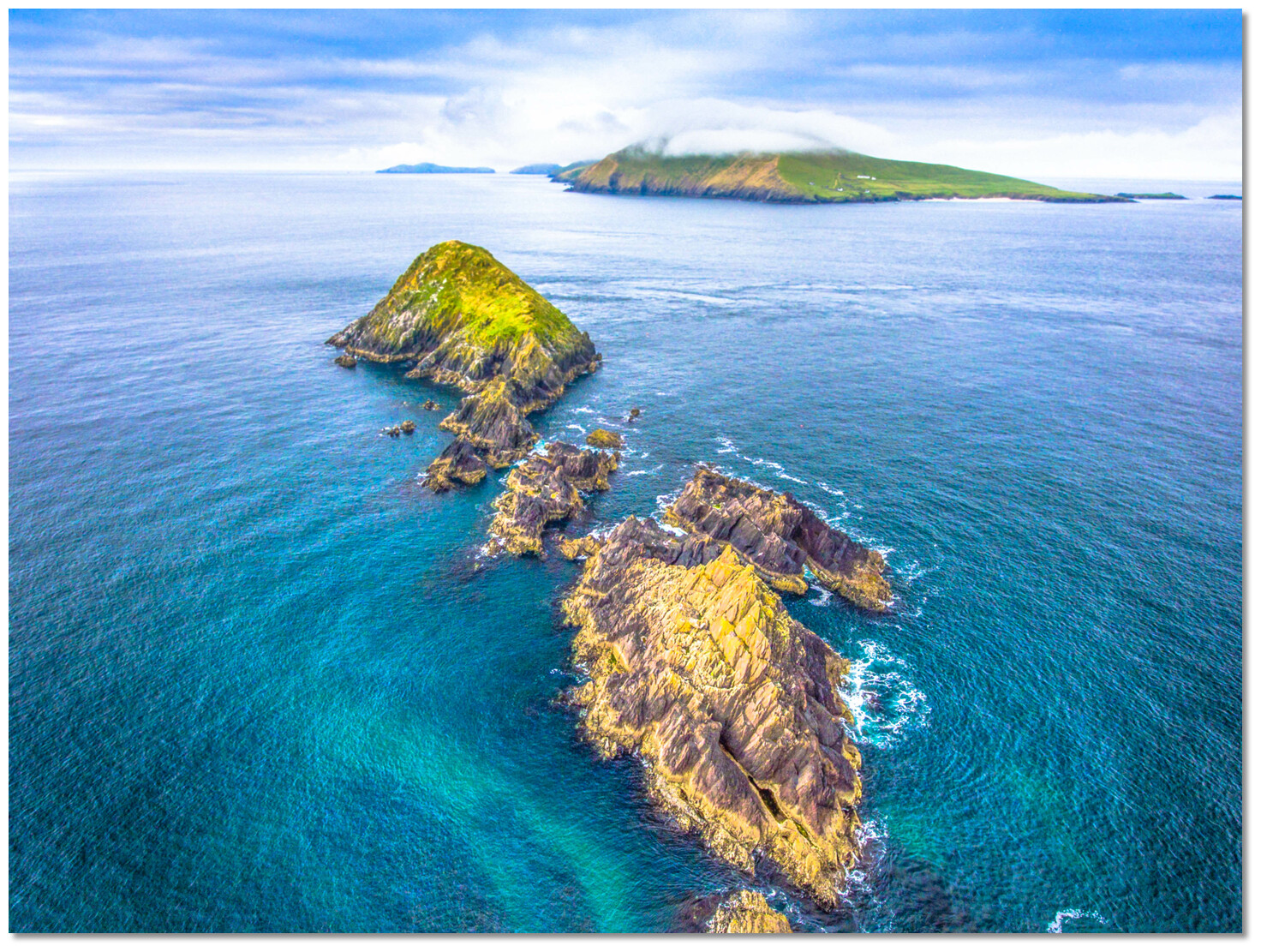 The Lure extending from Dunmore Head with Great Blasket in the backdrop
Image: Tourism Ireland

Beyond these again, and lying nearly in a direct line between the Lure and Garraun Point, almost half of the distance across from the former, is a series of sunken rocks called the Stromboli Rocks. These consist of several small pinnacles that have a least depth of 1.8 metres LAT. The exception is Scollage Rock, that is covered at high water, and lies 150 metres out from the Lure’s extremity. The Stromboli Rocks pinnacles make themselves known in stormy weather by heavy breakers. All these reduce the fairway to a width of ½ a mile on the western or island side.

The Lure
Photo: Tourism Ireland
LISTED WAYPOINTS
The complete course is 7.89 miles from the waypoint 'Southern Approach to Blasket Sound' to '½ a mile west of Sybil Points outliers' tending in a northerly direction (reciprocal southerly).

TRANSIT NOTES
Navigation through Blasket Sound revolves around making a passage of about 5 miles on the alignment of 015° T of:

Sybil Point terminates in a bold precipice which rises to a height of 206 metres. The tower may not be easily identified from the south, but the summit on which it stands is easily picked out to provide the leading mark.

Sybil Point as seen from the south
Photo: Tourism Ireland

The rugged 113 metres high Clogher Head lies about 1.7 miles south of Sybil Point. It has the prominent and sharply pointed above-water Clogher Rock close off the head. 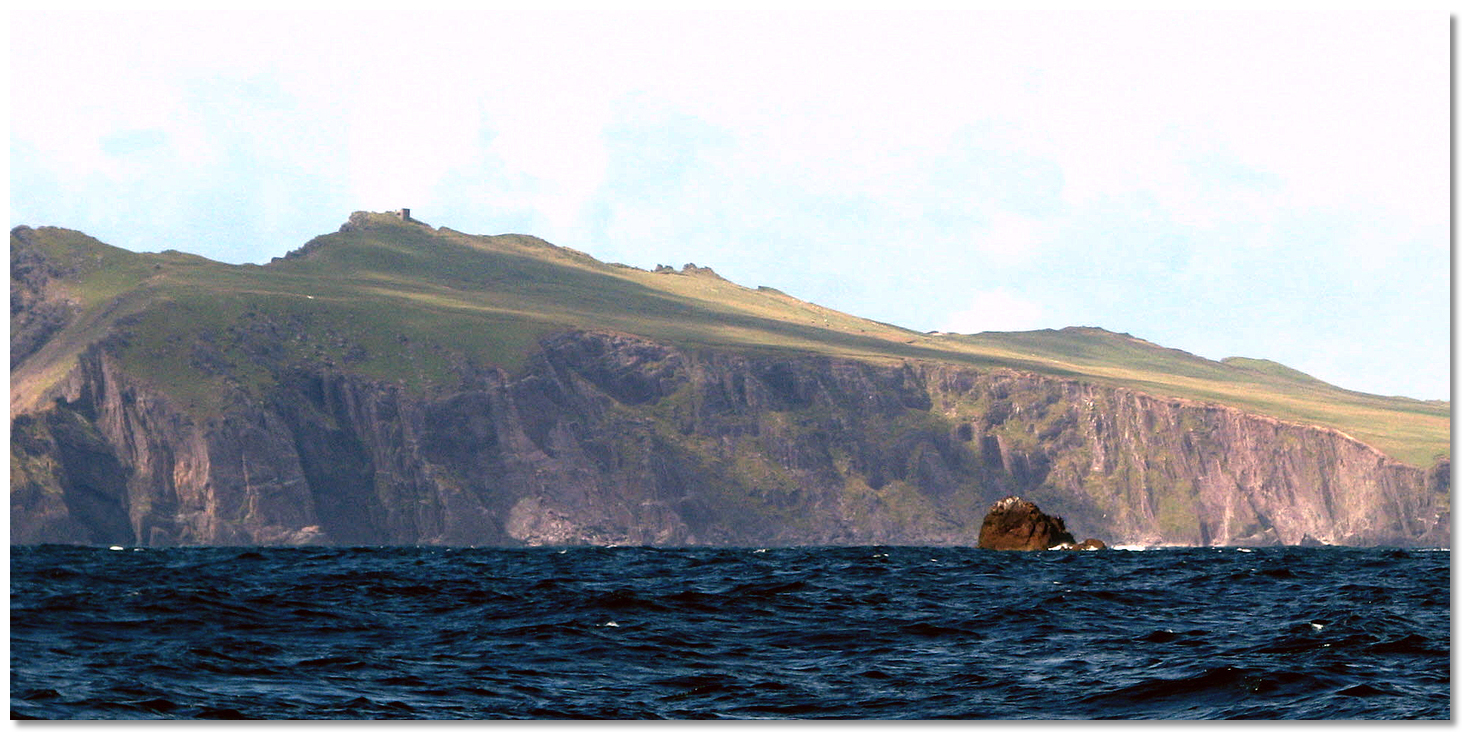 Bringing Clogher rock into line with the tower from the north
Photo: Graham Rabbits

These in line lead through the centre of the narrows and then a ¼ of a mile east of Beginish Island and its surrounding dangers.

On transit as seen from the south
Photo: Burke Corbett

From the south, keep centre alignment at all times particularly at the narrowest point of the sound, between Great Blasket Island’s Garraun Point and Dunmore Head where the fairway reduces to ½ a mile.

The northern side of Blasket Sound
Photo: d_marino2001 via CC BY-SA 2.0

Once past the narrows, the passage becomes partially sheltered by a large number of rocks and islets that extend a mile northward from Great Blasket making for a much more comfortable run.

In the area between Blasket Sound and Sybil Point, there can be a nasty race in west or northwest winds over the north-going tide. In fine weather, in the absence of a heavy swell, this presents no problem

At the ‘Northern Approach to Blasket Sound’ waypoint, the vessel is abeam of the north ends of the groups Connor Rock, about a mile to the west, with open sea ahead. From here it is time to depart the transit and continue northward to clear the Maher-aneig rocks that extend a ⅓ of a mile off the steep cliffs of Sybil Point. Southbound vessels should just apply the reverse.

Vessels should be prepared for sudden and violent gusts of the wind, that comes off the mountains and high islands in this area.

. Close northwest of Garraun Point and upon the shore facing the mainland, there is a beach called An Trá Ban. In fine weather, a vessel may anchor off the beach in 3 metres over a sandy bottom and land on the beach.

An Trá Ban where it is possible to anchor off Great Blasket Island
Photo: William Glasgow Howe