This route provides guidance waypoints to assist navigation through the coastal cut provided by Dursey Sound. Dursey Sound is a deep but narrow channel between Dursey Island and the southwestern extremity of the Beara Peninsula, that is bounded to the north by the Kenmare River and south by Bantry Bay.

Dursey Sound offers sailors a shortcut to and from the Kenmare River and Bantry Bay. With a least charted depth of 11.6 metres CD, Dursey Sound is deep but it has a tidal race and the fairway is reduced to a width of about 70 metres by covered rocks that extend out from the mainland side.

However, it saves at least an hour of sailing and makes for an interesting passage. It also avoids the complications of navigating a path through The Bull, The Cow and The Calf rocks that lie to the west of Dursey Island of which only the Bull Rock is lighted. 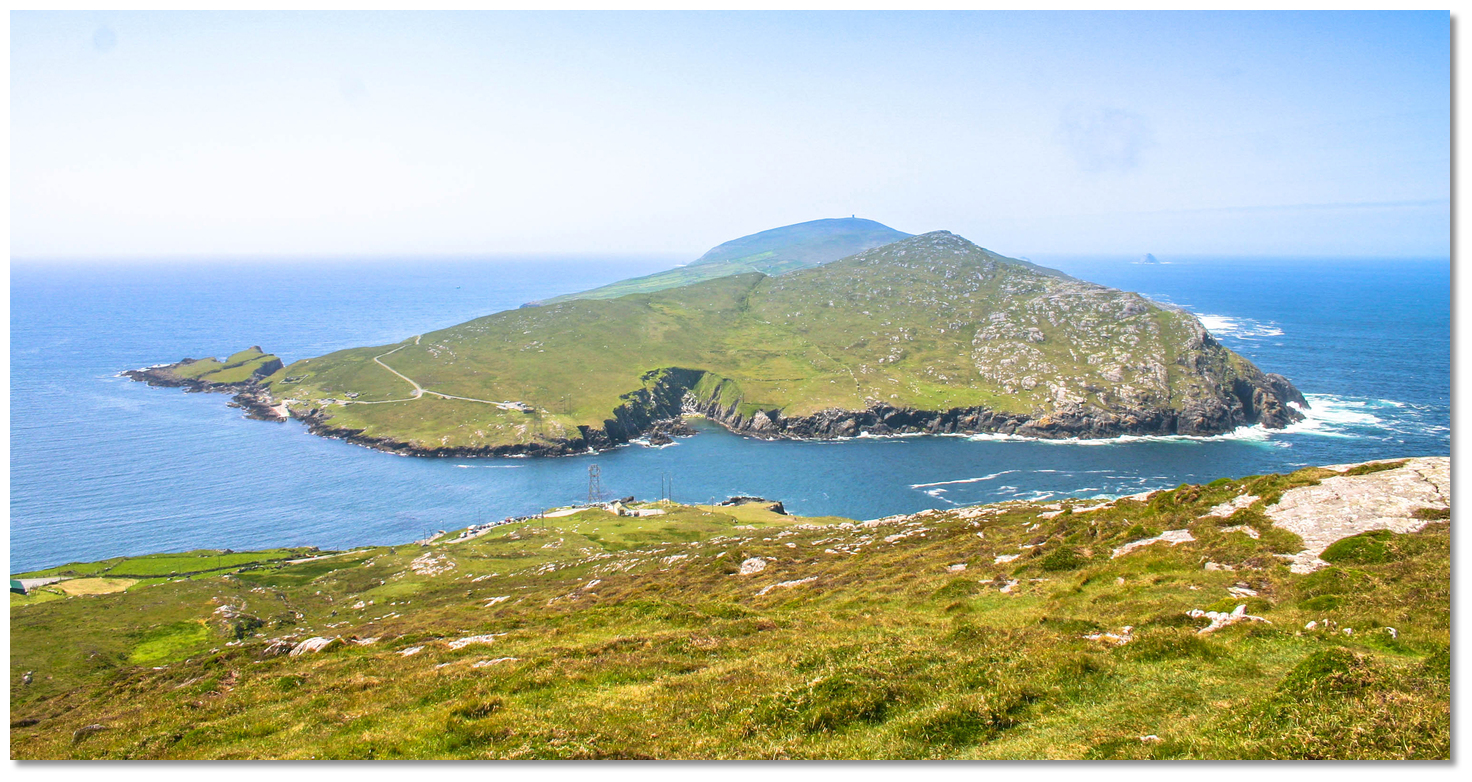 Dursey Sound as seen from the Berra Peninsula
Image: ArnoutVos via CC BY-SA 2.0

This is not a foul-weather cut as both ends of Dursey Sound are exposed to the Atlantic Ocean and a large seaway can be encountered in the sound itself. This is further complicated by shifting and funnelling wind-over-tide.

Today's summary tidal overview for this route as of Monday, August 15th at 19:12. Tidal streams in the sound are strong attaining 4kn in the narrows where it sets in line with the fairway. The main east going stream enters the north entrance of Dursey Sound at Dover +0145 (Cobh -0450) and then turns southward. The main west going stream enters the southern entrance at Dover -0415 (Cobh +0135) and then turns northward. The fairway’s strong tidal streams create eddies in the approaches and can cause overfalls in the narrows.

As such it is advisable to make a transit with a favourable tide or at least before it reaches its maximum rate. 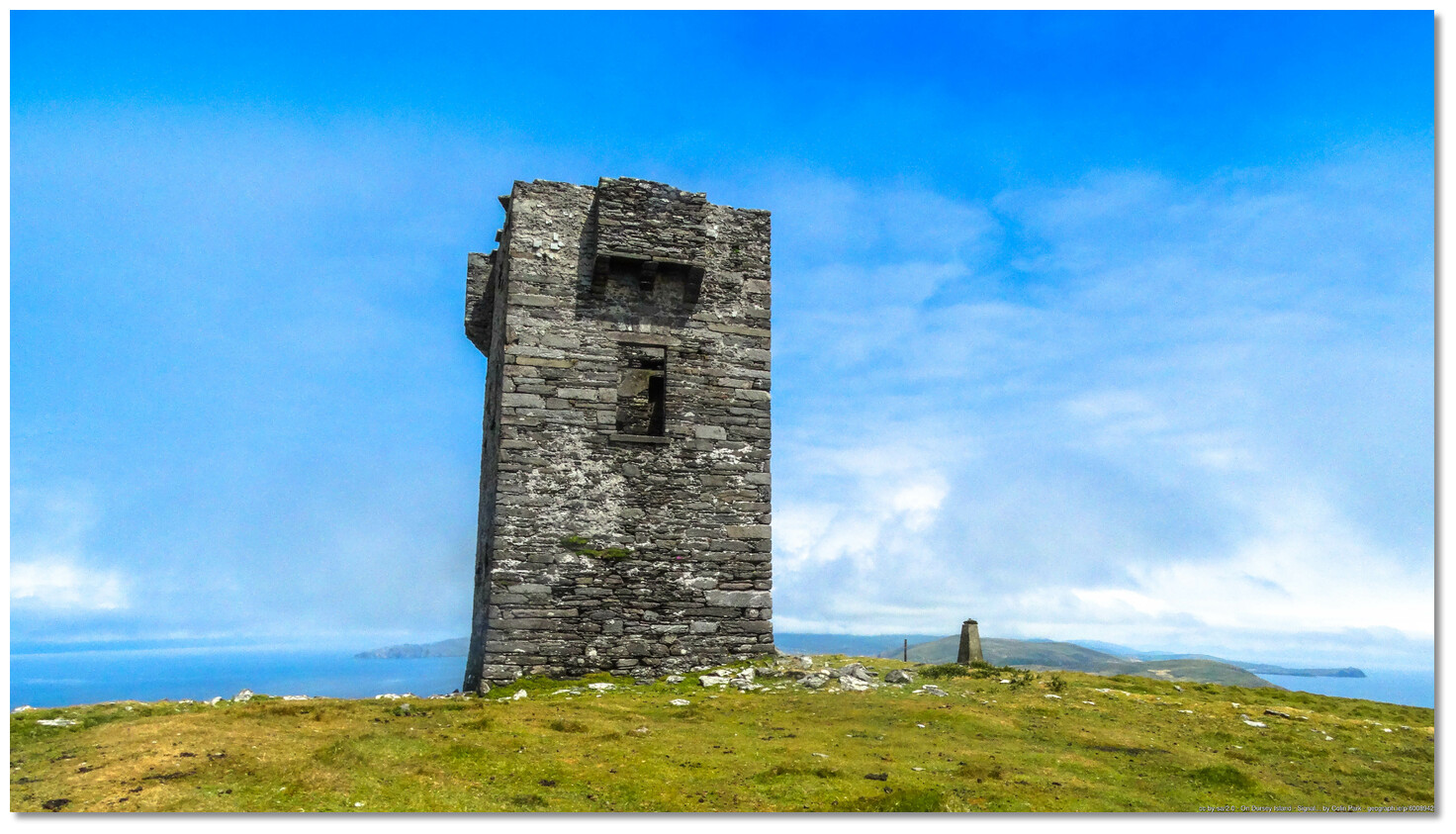 The signal tower on the highest point of Dursey Island
Image: Colin Park via CC BY-SA 2.0

Dursey Island is located 1½ miles west-northwest of Crow Head. The island is 250 metres high, 3½ miles long and is readily identified by an old signal tower on its summit. Dursey Sound lies on the east side of the island between it and the southwestern end of the mainland’s Berra Peninsula.

The tidal stream in the sound attains 4kn in the narrows so this will be the primary determinant of the timing for the passage. A settled conditions tide wait location for northbound vessels may be had Dursey Sound Anchorage

. This is in a patch of sand off the mainland situated about 800 metres to the southeast of the narrows. Likewise, Garnish Bay

, on the north side of the Dursey promontory where the coast falls back to the east towards Kenmare River, provides the perfect location to catch the south going tide. 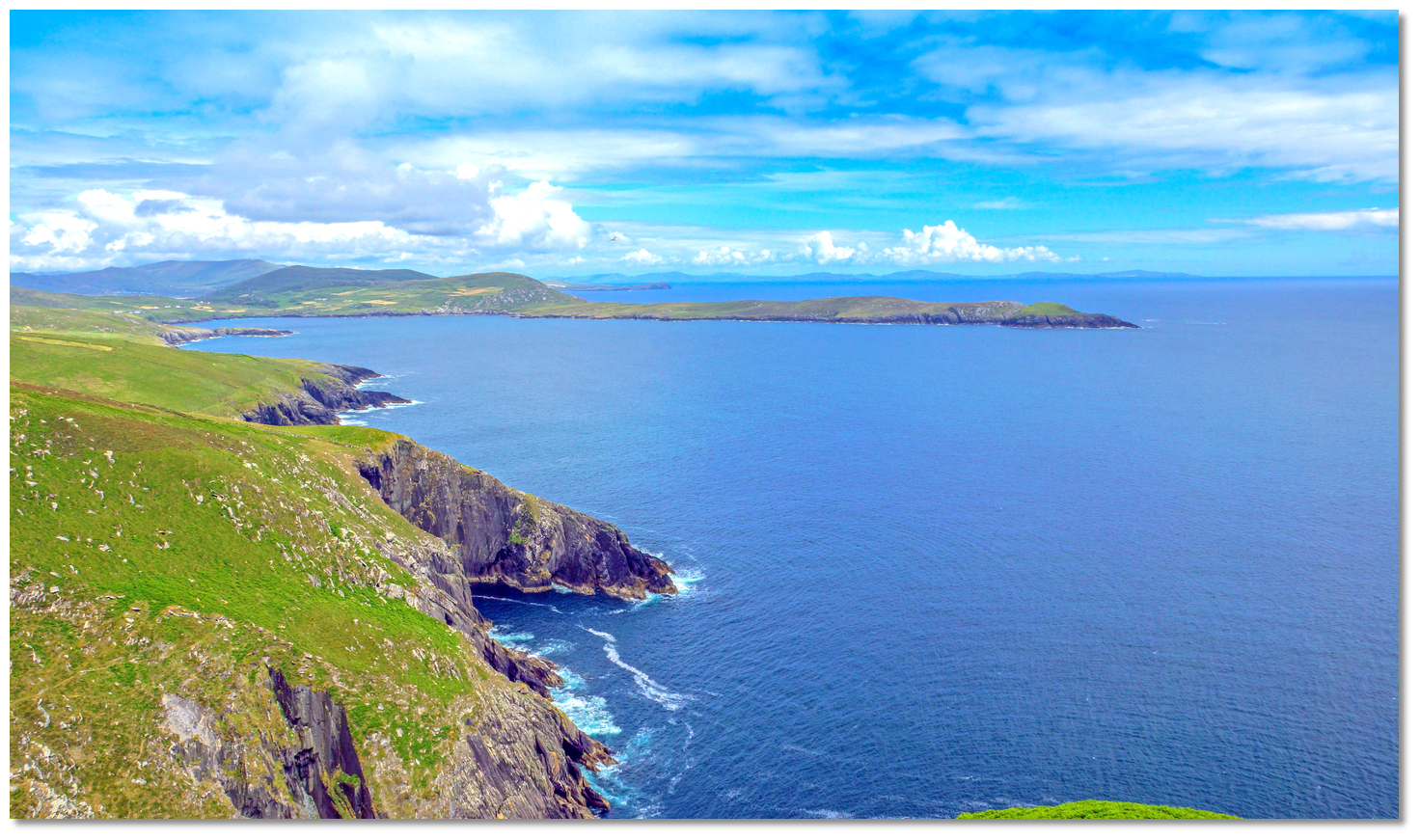 The southern end of the Sound with Crow Head seen from Dursey Island
Image: Allie Caulfield via CC BY-SA 2.0 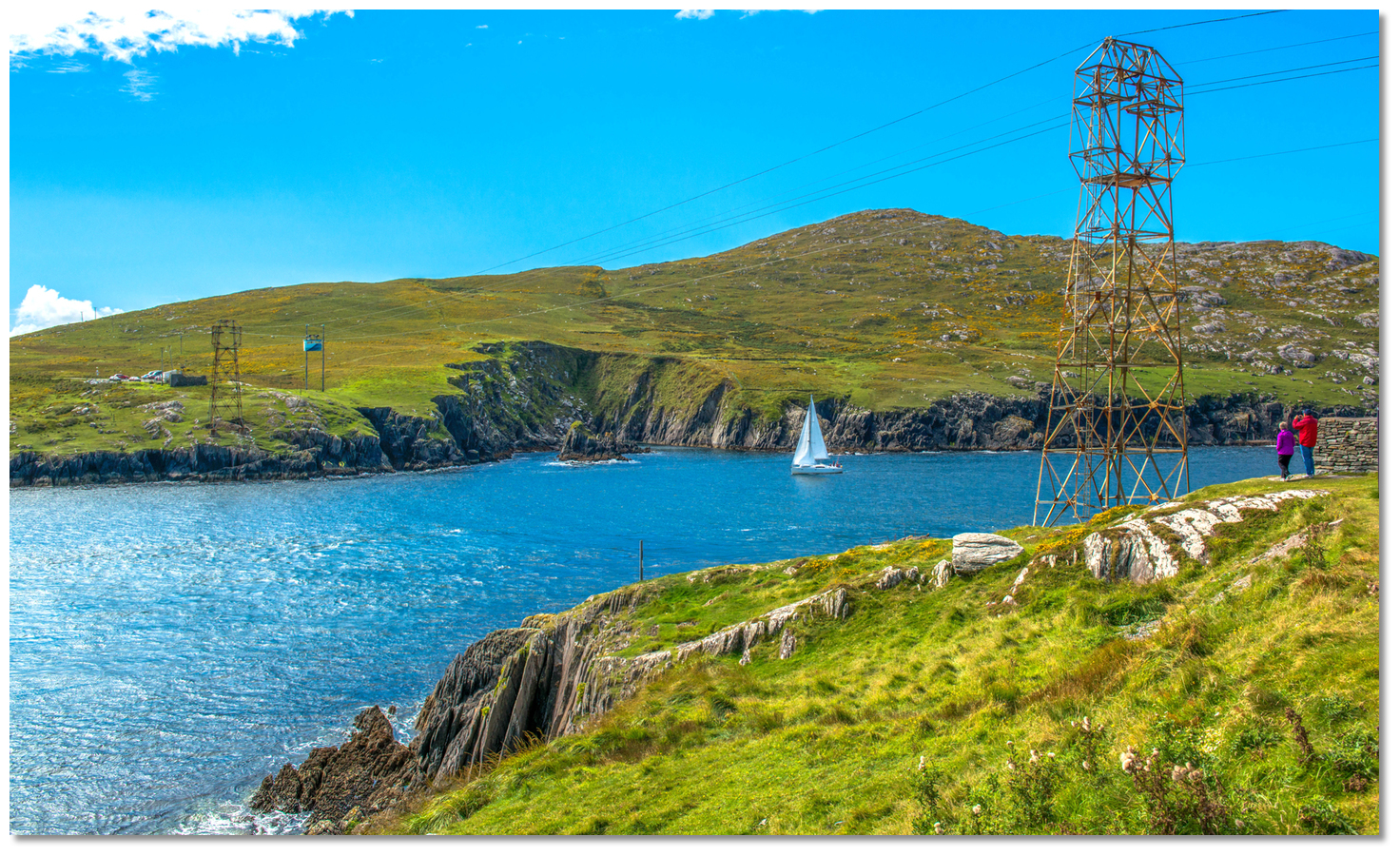 Those planning a southern approach should make note of a couple of rocks that lie off Crow Head the southwest corner of the Berra Peninsula. The drying Cat Rock is located about 400 metres southwest of the extremity of the head and is very much in the way of vessels moving between Bantry Bay and Dursey Sound. 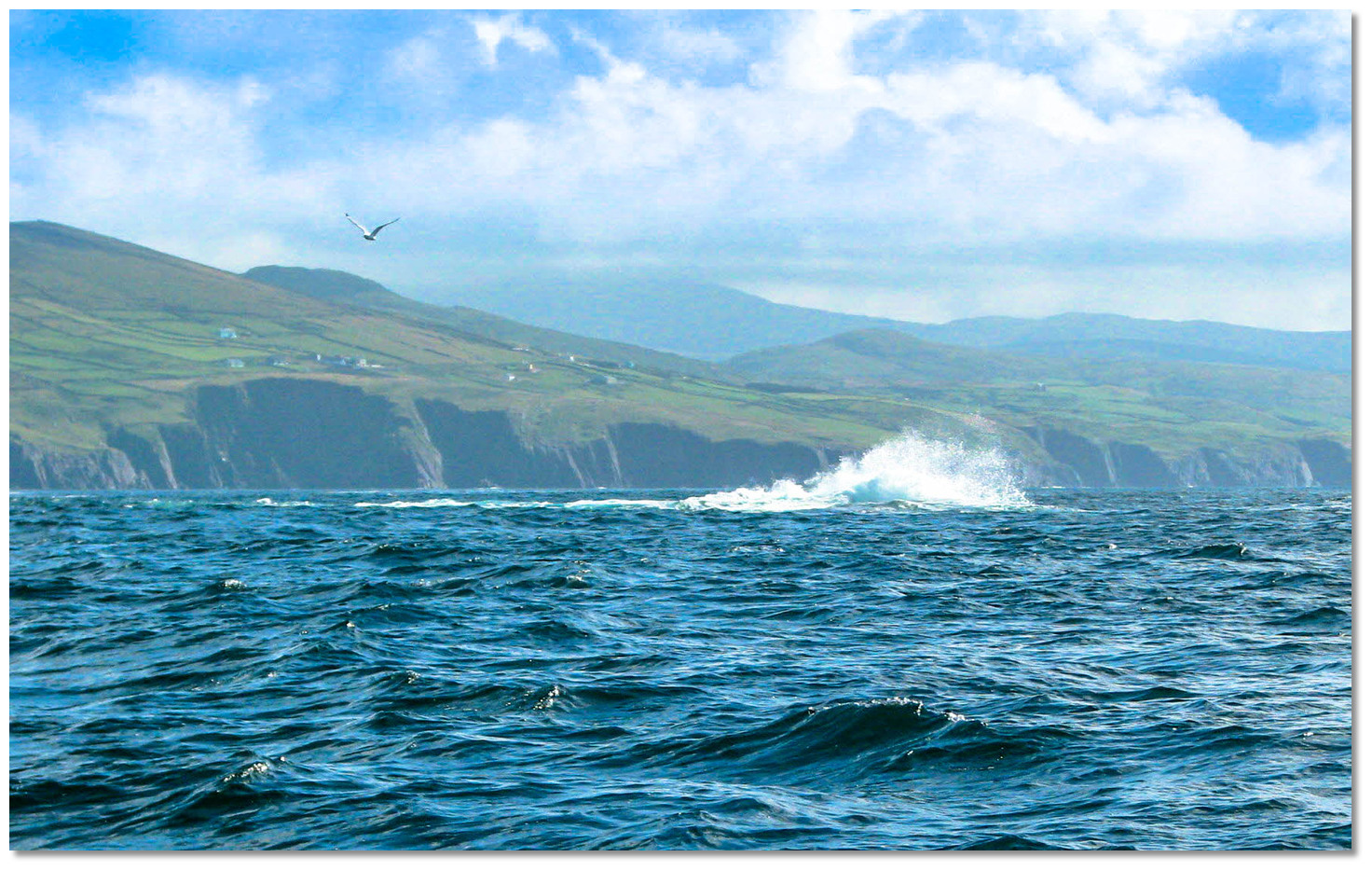 It dries to 3.3 metres and generally makes itself known by its breakers. The Bull’s Forehead rock, awash and 300 metres west of Crow Island, should also be avoided.

Dursey Sound - Southern Entrance, 51° 34.643' N, 010° 11.455' W
This is 1 mile west of the dangerous Cat Rock towards which both tidal streams set. Proceed northeastward from here making certain not to be pushed toward the Bull's Forehead rock, situated close west of Crow Island and 600 metres northwest of Cat Rock. 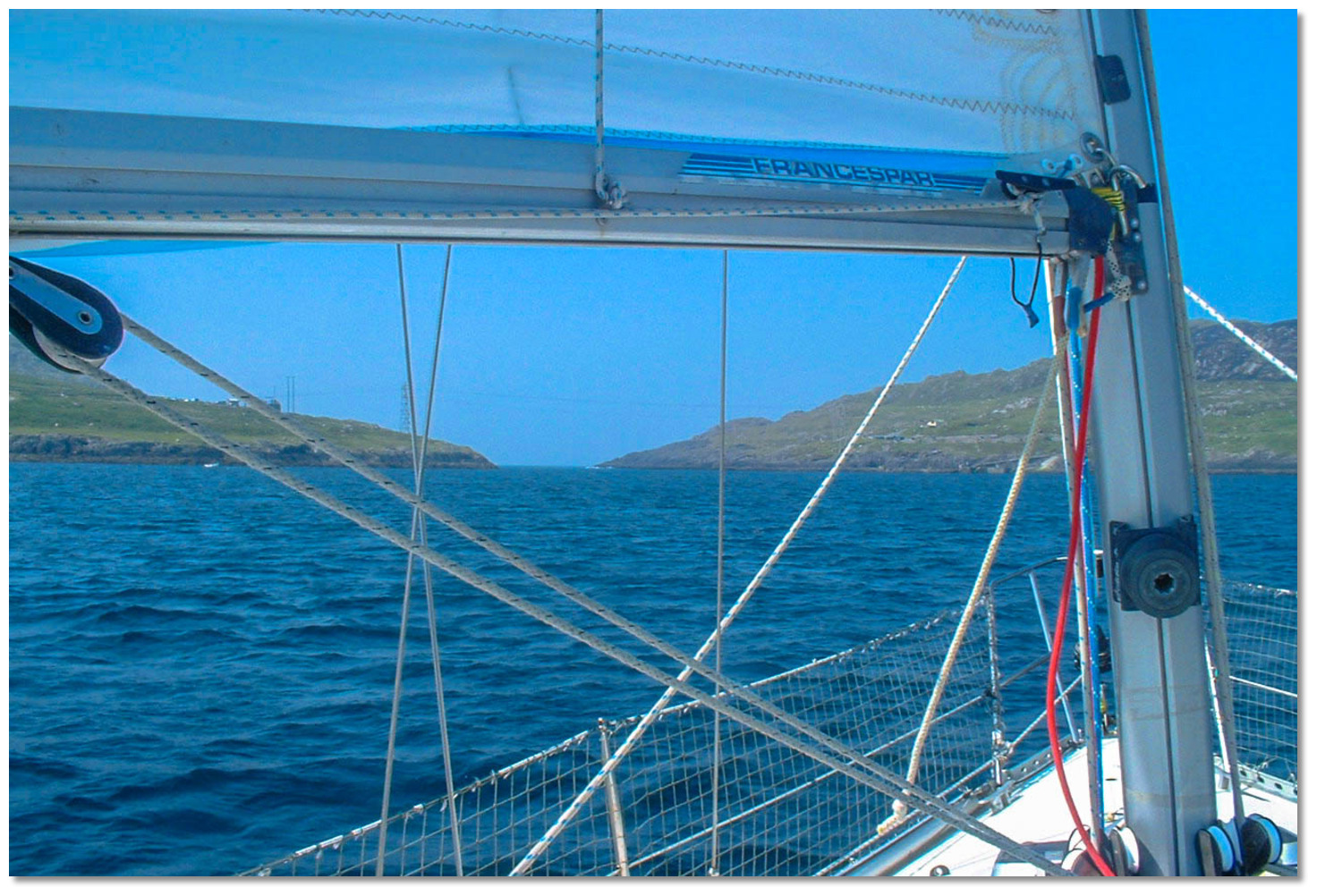 A peculiarity of Dursey Sound is that, from either a southern or northern approach, it is very difficult to make out the passage and especially so in poor visibility. It always has the unnerving appearance of presenting a solid cliff face until close in. The towers for the cable car, however, are readily identifiable marks for a northern approach and, if you are lucky, perhaps the cable car itself. Hence this set of waypoints will make it easier to find the fairway, but this is a cut that requires eye-ball navigation too. 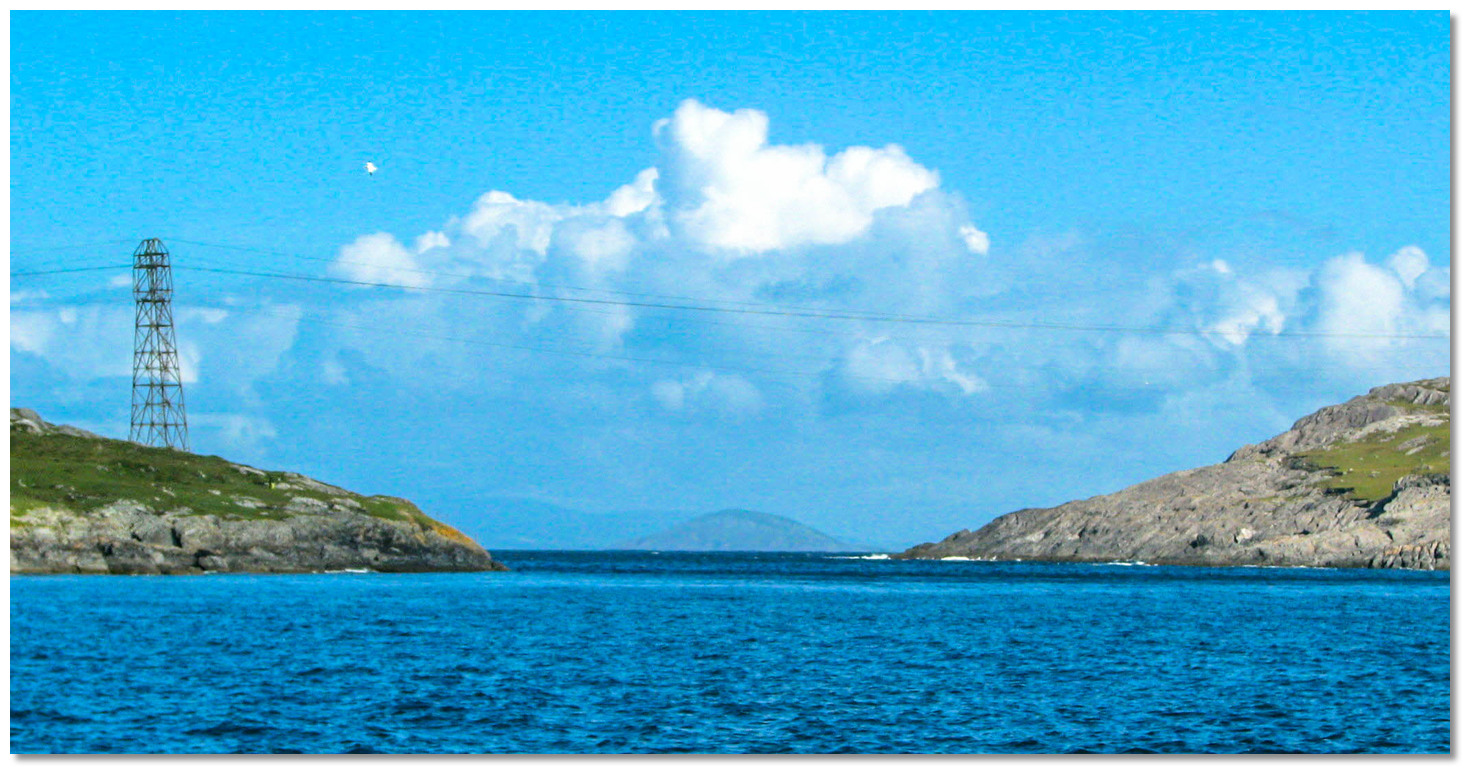 It is essential to keep to the west, or the Dursey Island side, of the channel in the narrows whilst making the transit. The mainland side is rock-strewn out to about 100 metres. The key rock is the outermost Flag Rock, 0.3 metres of cover at CD. There is also another dangerous rock that lies about 120 metres north by northwest of Flag Rock approximately the same distance north of the span of the cable car. The 9 metres high Glasfeactula Rock, on the northeast side of the north entrance should also be given a wide berth. 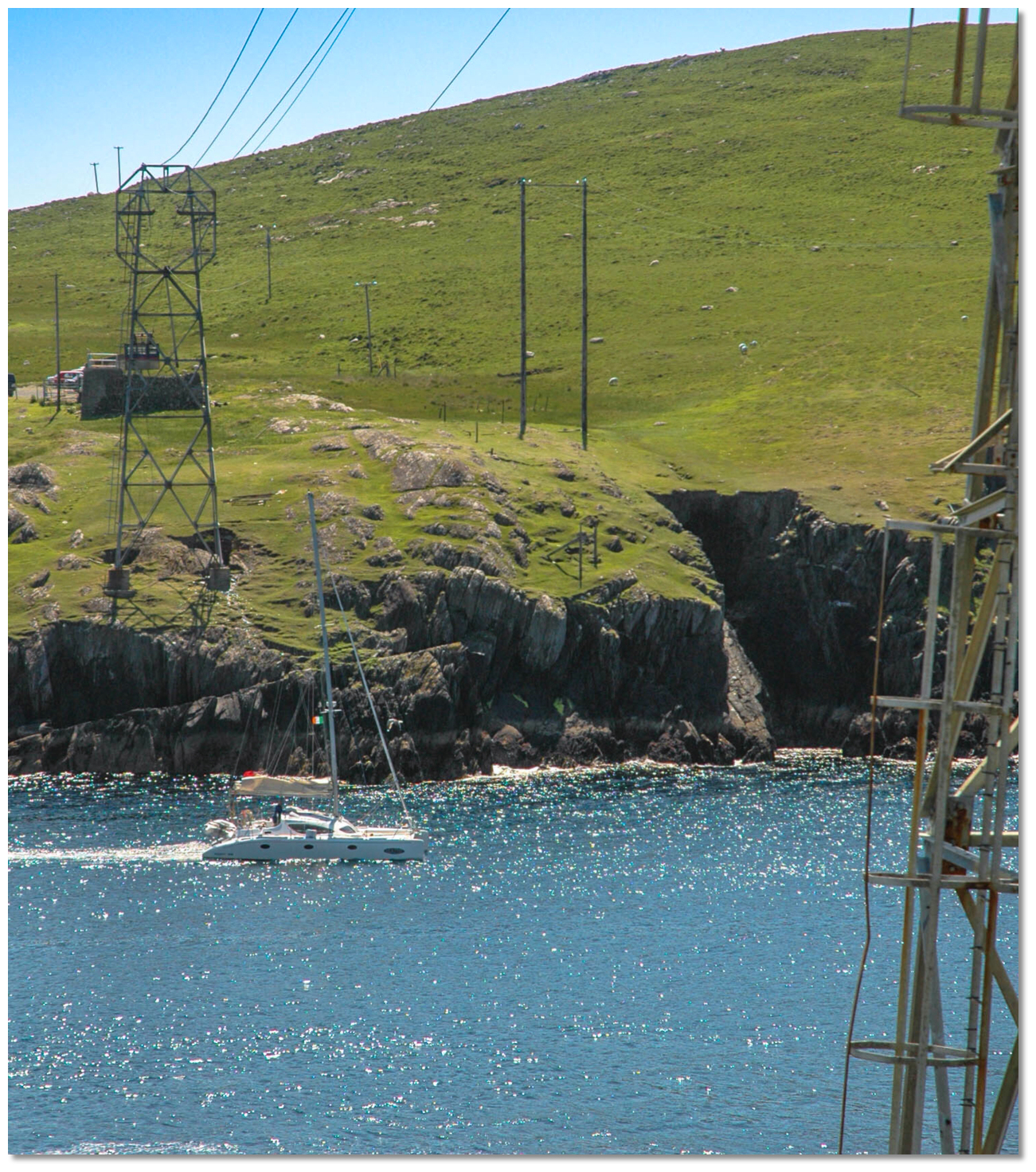 A vessel approaching from the north may encounter particularly shifty winds plus disturbed rebounding seas coming off Glasfeactula. All transiting vessels should be prepared for sudden changes in wind direction and different winds at either end of the sound. 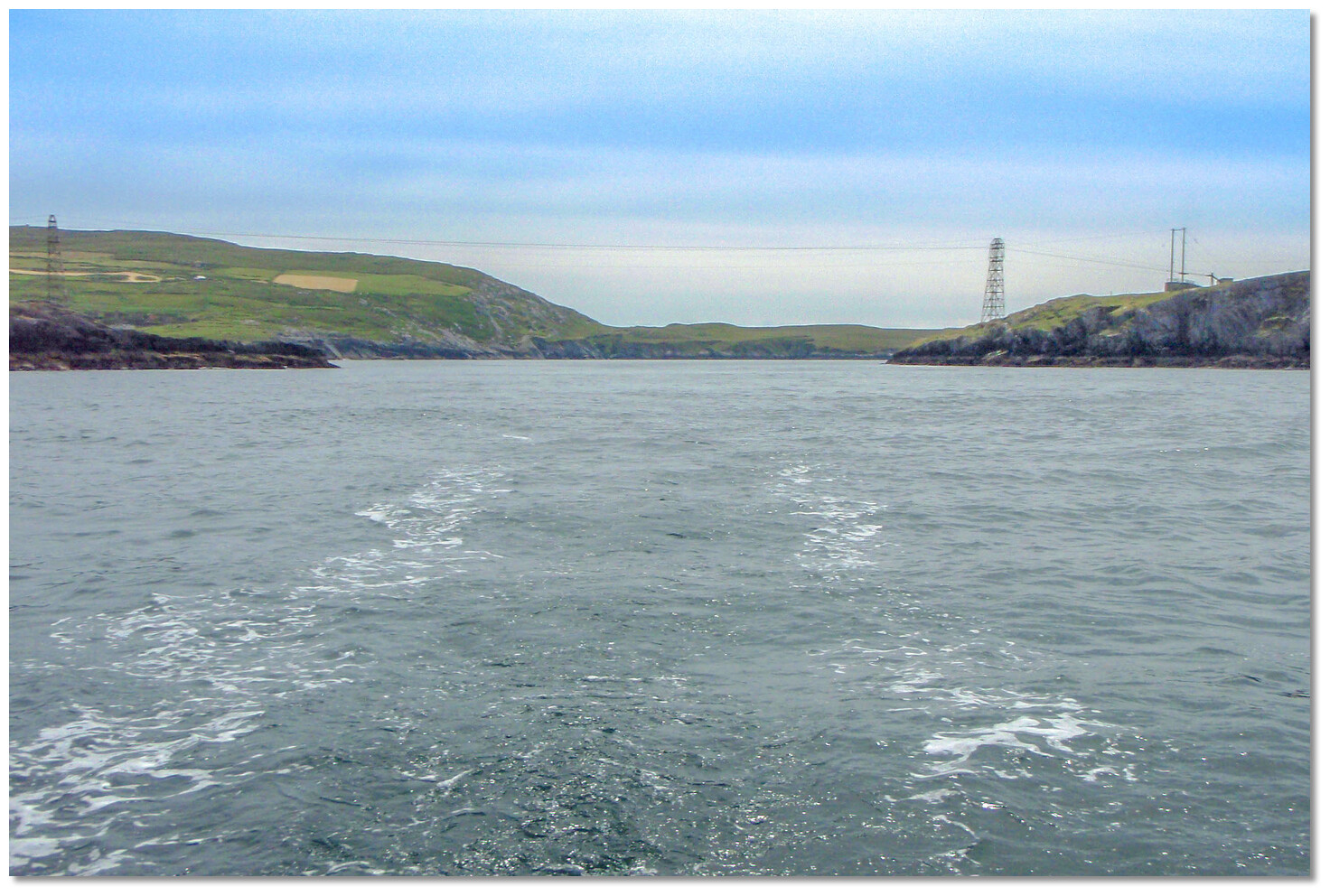 may be availed of by northbound vessels. This is in a patch of sand off the mainland situated about 800 metres to the southeast of the narrows.

Cat Rock seen from the southeast with Dursey Island in the backdrop
Photo: eOceanic thanks Burke Corbett


Cat Rock viewed from the west with Bear Island in backdrop
Photo: eOceanic thanks Burke Corbett


Dursey Sound as seen from the south
Photo: eOceanic thanks Burke Corbett 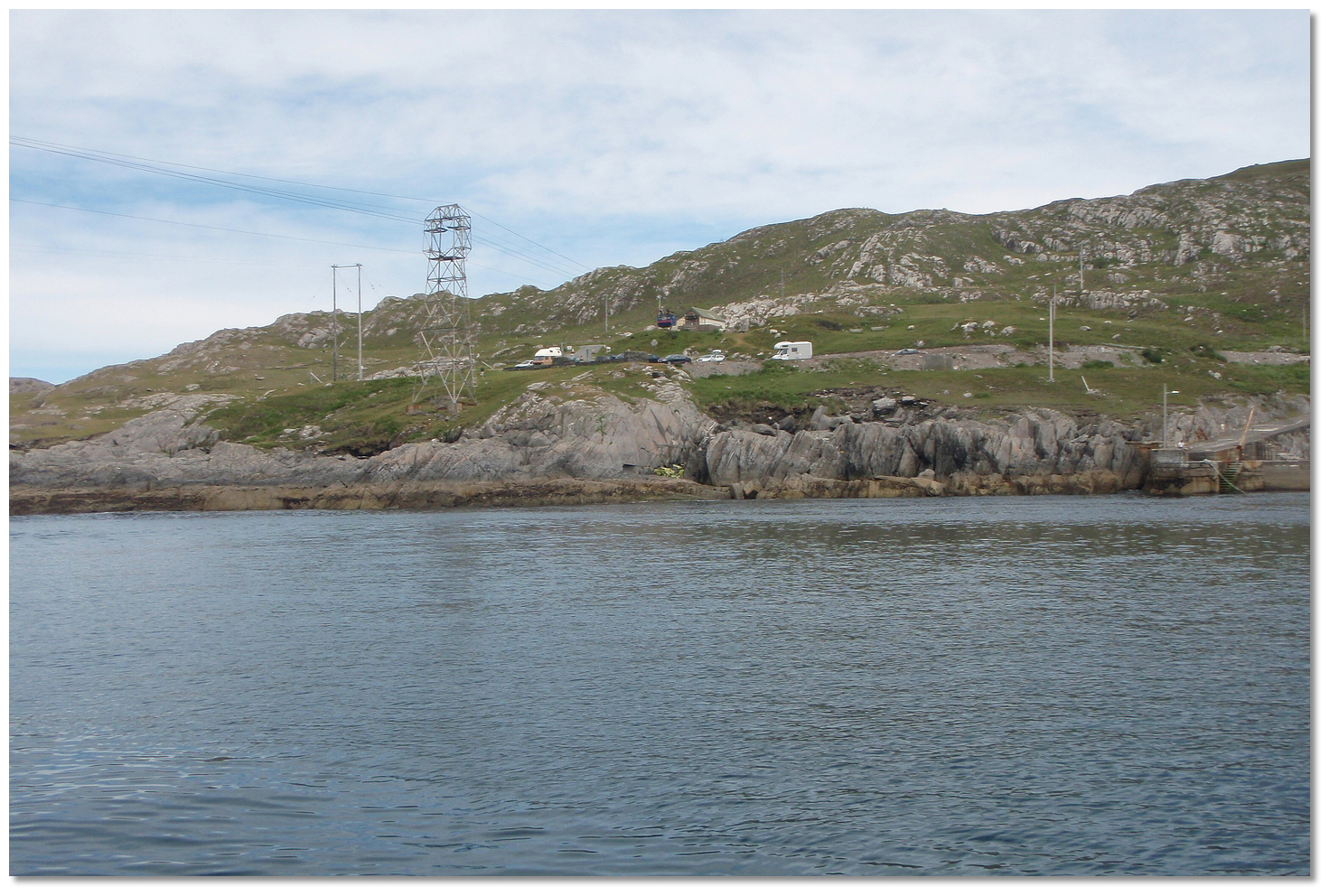 The cable car on the mainland side
Photo: Burke Corbett


Glasfeactula Rock on the northeast side of the north entrance
Photo: eOceanic thanks Burke Corbett 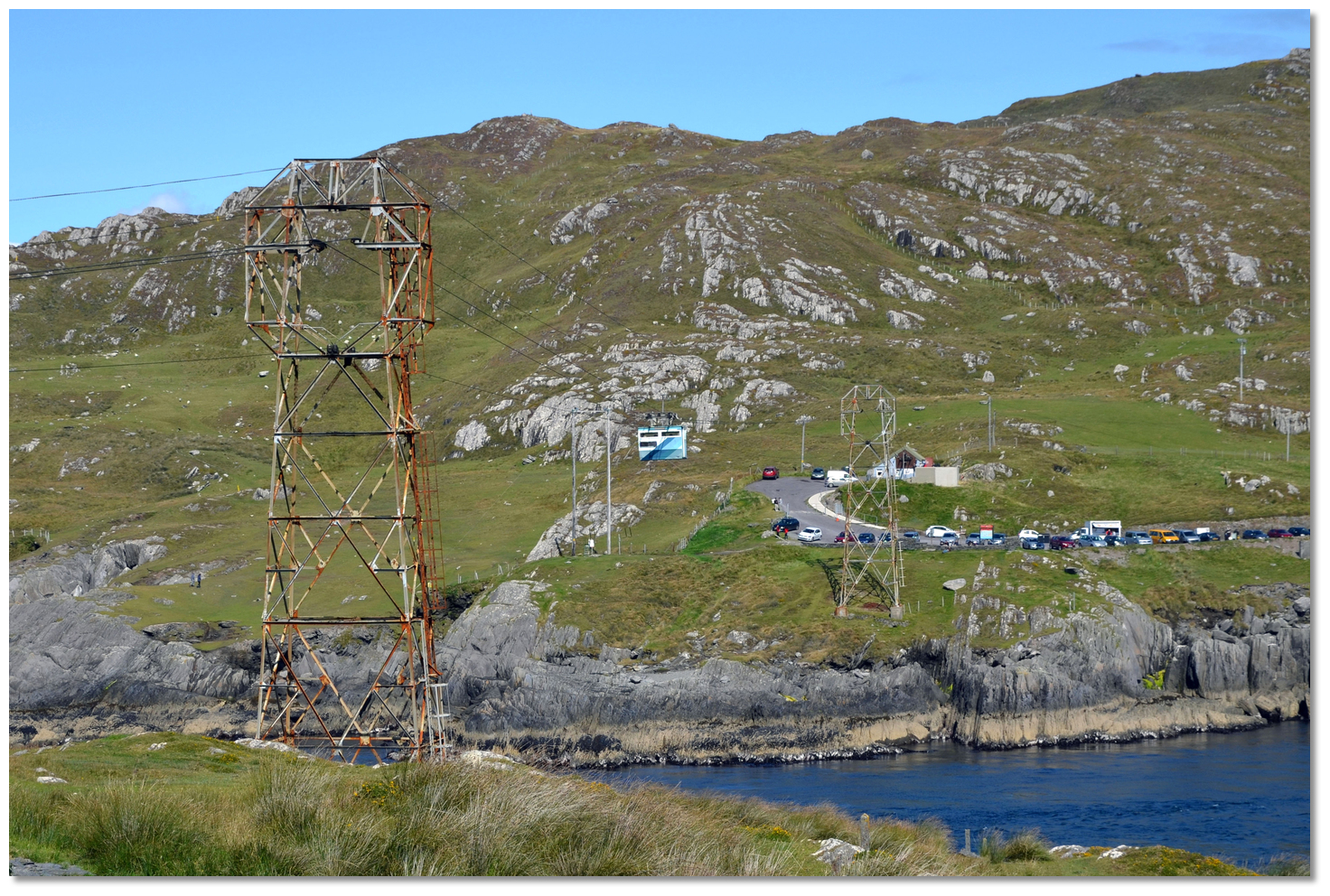 Cable car as seen from the Dursey Island side
Photo: K. Jähne via ASA 3.0