This is a passage across the broad stretch of shallow water that lies to the east of Tresco to allow vessels in Old Grimsby Sound to connect to St Mary’s Road. Large sections of the route are shallow and parts dry to 0.4 metres LAT so a sufficient rise of tide is required and it is ideally addressed on the flood. The route is sequenced from to St Mary’s Road to Old Grimsby Sound but it may is available both ways. 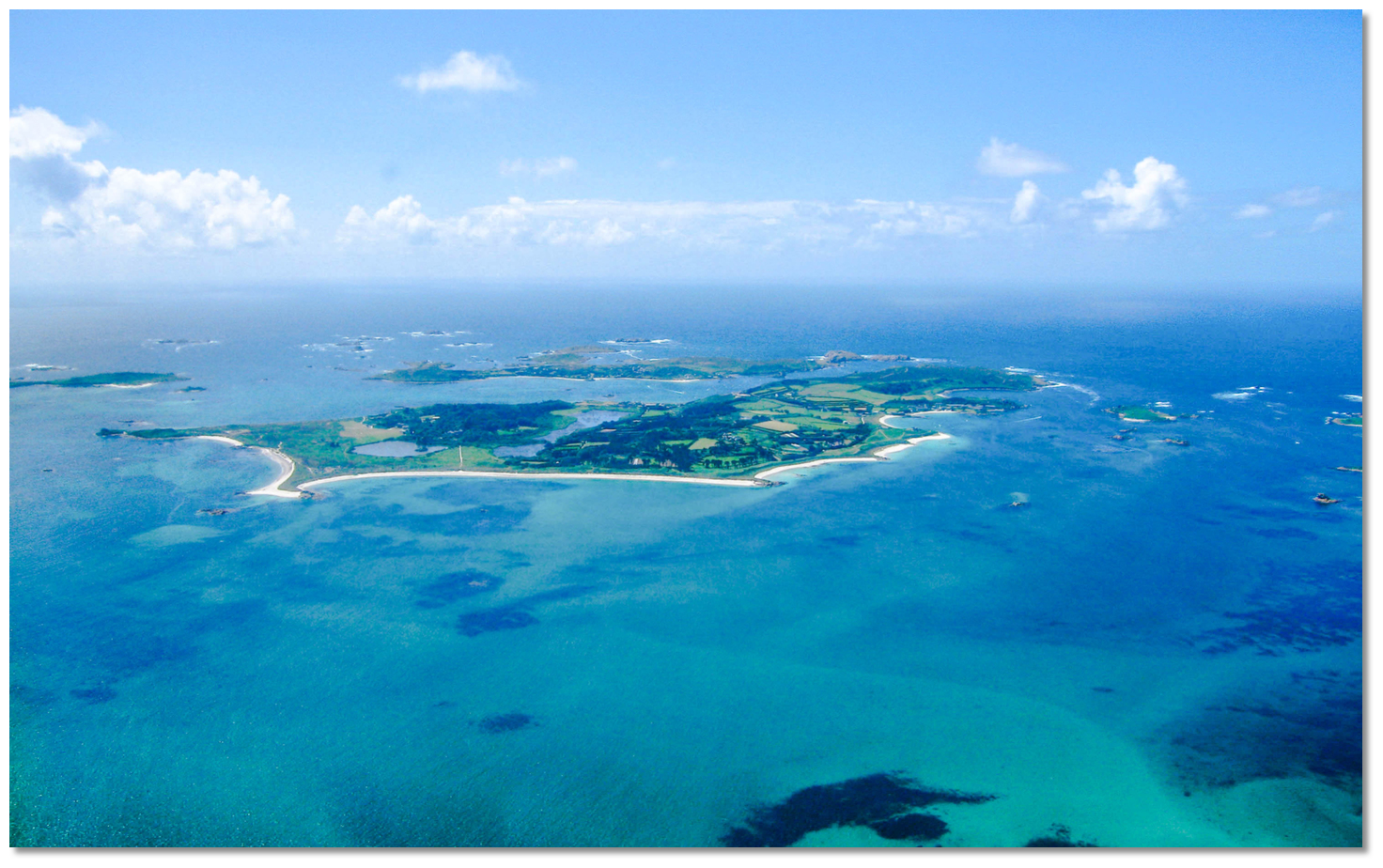 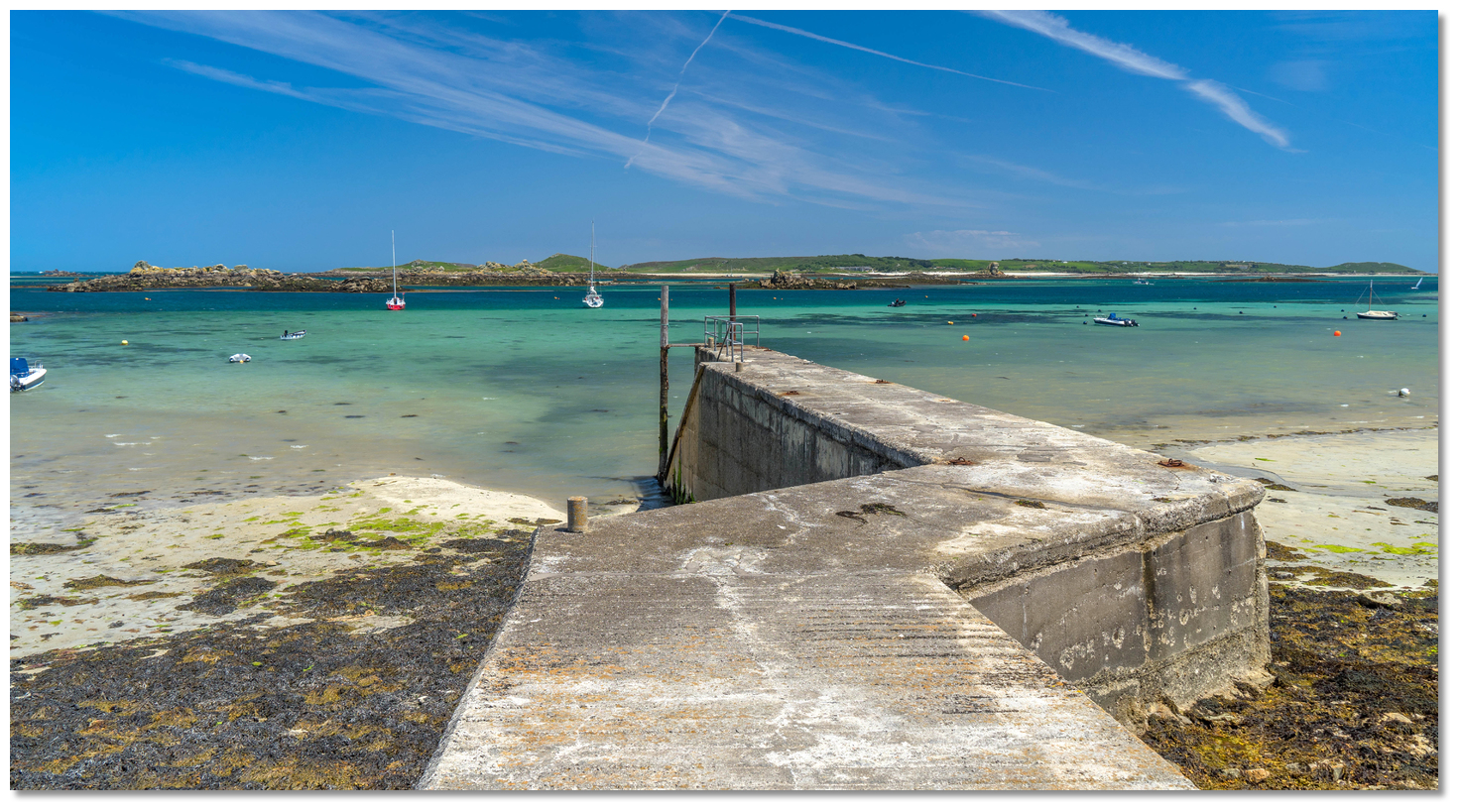 to connect St Mary's Road with Tean Sound and all of the principal anchorages in the northeast and east end of the group as follows:

In a group where no anchorage provides complete protection, all of the time, and vessels have to prepared to shift in order to make the best of the weather, this ability to quickly cut between all of these anchorages is more than useful. Likewise, with a least depth of about 0.5 metres, this should not prove over limiting and particularly so during Neaps when, with a tidal range of 2.3 – 5 metres, it is a reasonably available option for most vessels most of the time. Using this internal cut saves hours of sailing for those planning to pass around the north side of St Martin's. In suitable conditions, it can also provide an enjoyable piece of pilotage.

Today's summary tidal overview for this route as of Wednesday, February 8th at 17:01. With large a small section of this route drying to 0.4 metres, a rise of tide will be required for vessels carrying any draft. Vessels carrying up to 1.3 metres can as a general rule proceed 1 hour after LW and freely pass during Neaps. Vessels of 1.8 metres should wait for 2 hrs after LW, which the timer set for 4 hours before and, conservatively, 2 after. For more detailed work:

OVERVIEW
The cut through the flats requires moderately good visibility and an adequate rise of tide to pass over its shallowest point of 0.4 LAT located west of Little Pentle Rock. As it is shallow with parts that dry at LAT, with close-lying rocks and ledges, good charts/plotters are key. 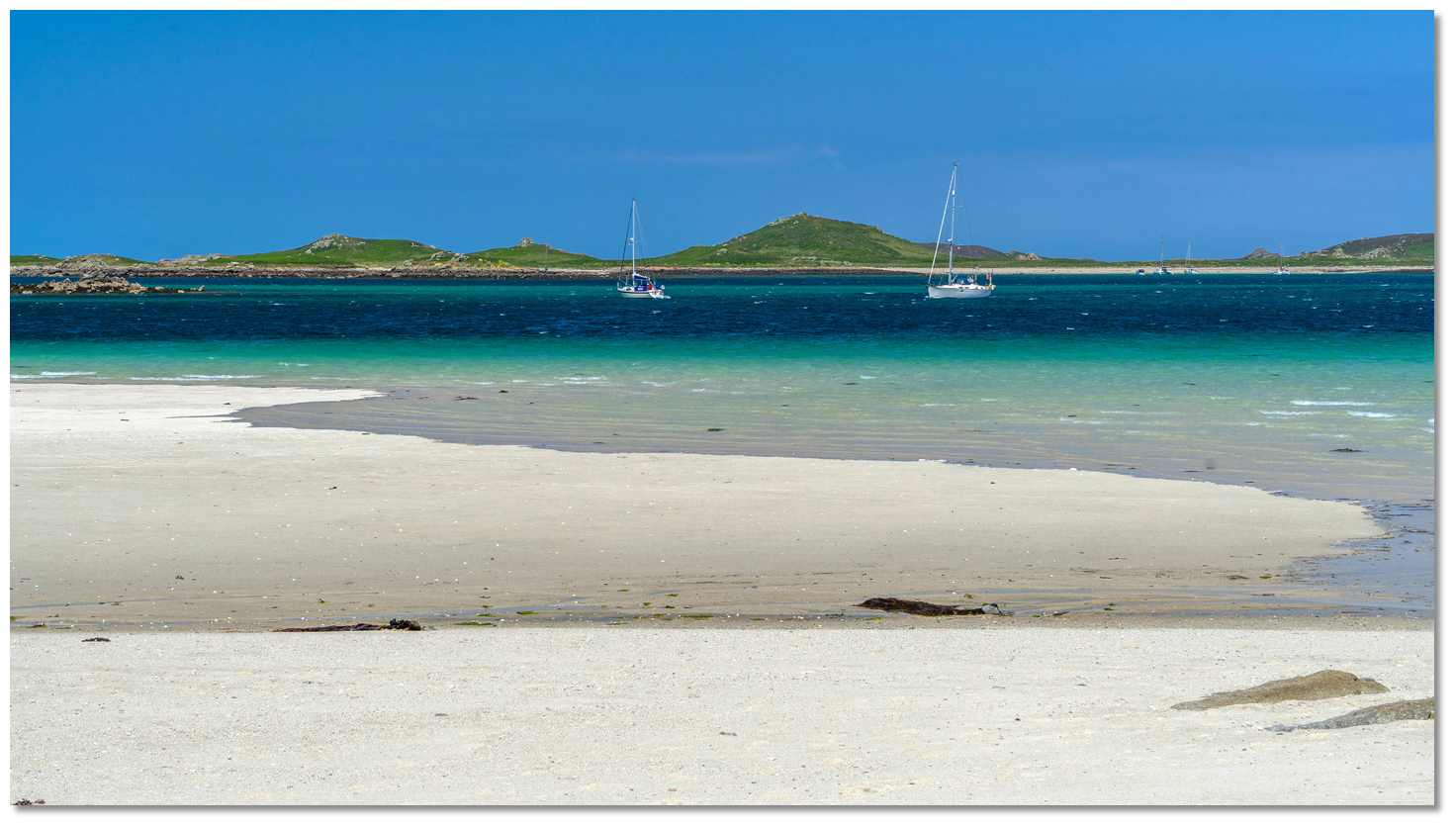 Be prepared to take this route under power, in a steady fashion identifying the rocks and marks through the passage along the way. Conservatively planning for a maximum drying height of 0.5 meters LAT or a little more will provide adequate water for most leisure craft at half-tide with the prudent making the approach during the flood. However, this is not a passage a newcomer should attempt at night nor on the ebb.

GENERAL DIRECTIONS
With sufficient tide run into the north end of St Mary’s Road to the St Mary’s Road North waypoint located on about 400 metres westward of Creeb. This is on the alignment of Nut Rock on a bearing of 260° T in line with the summit of the South Hill on Sampson that clears The Pots. From here steer for the Crow Rock North waypoint.

This is located about 400 metres north by northwest of the Crow Rock isolated danger mark Fl(2)10s and on the 160°T transit of the danger mark and the TV tower on St Mary's. This is the traditional alignment used for this part of the voyage, but in this track, slightly stepping out eastward of the transit to the Cones Waypoint as it passes unnecessarily close to the small Cones ledge. 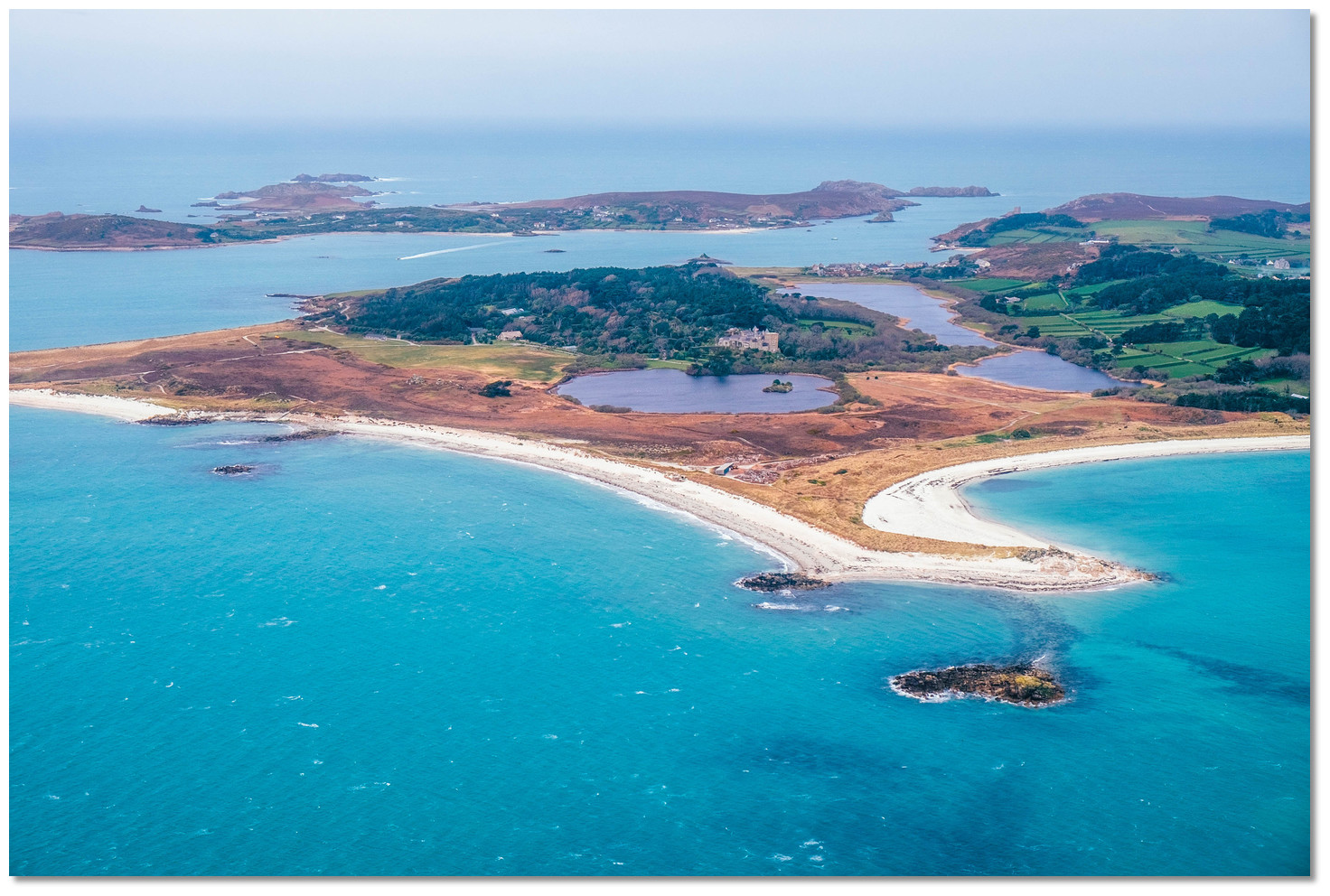 Skirt Island and its ledges on the southwestern extremity of Tresco
Image: Photo by Annie Spratt on Unsplash

Cones is a small outlier of the Diamond Ledge, drying to 5.4 metres, that extends a ¼ of a mile eastward of Skirt Island, the southwestern extremity of Tresco. 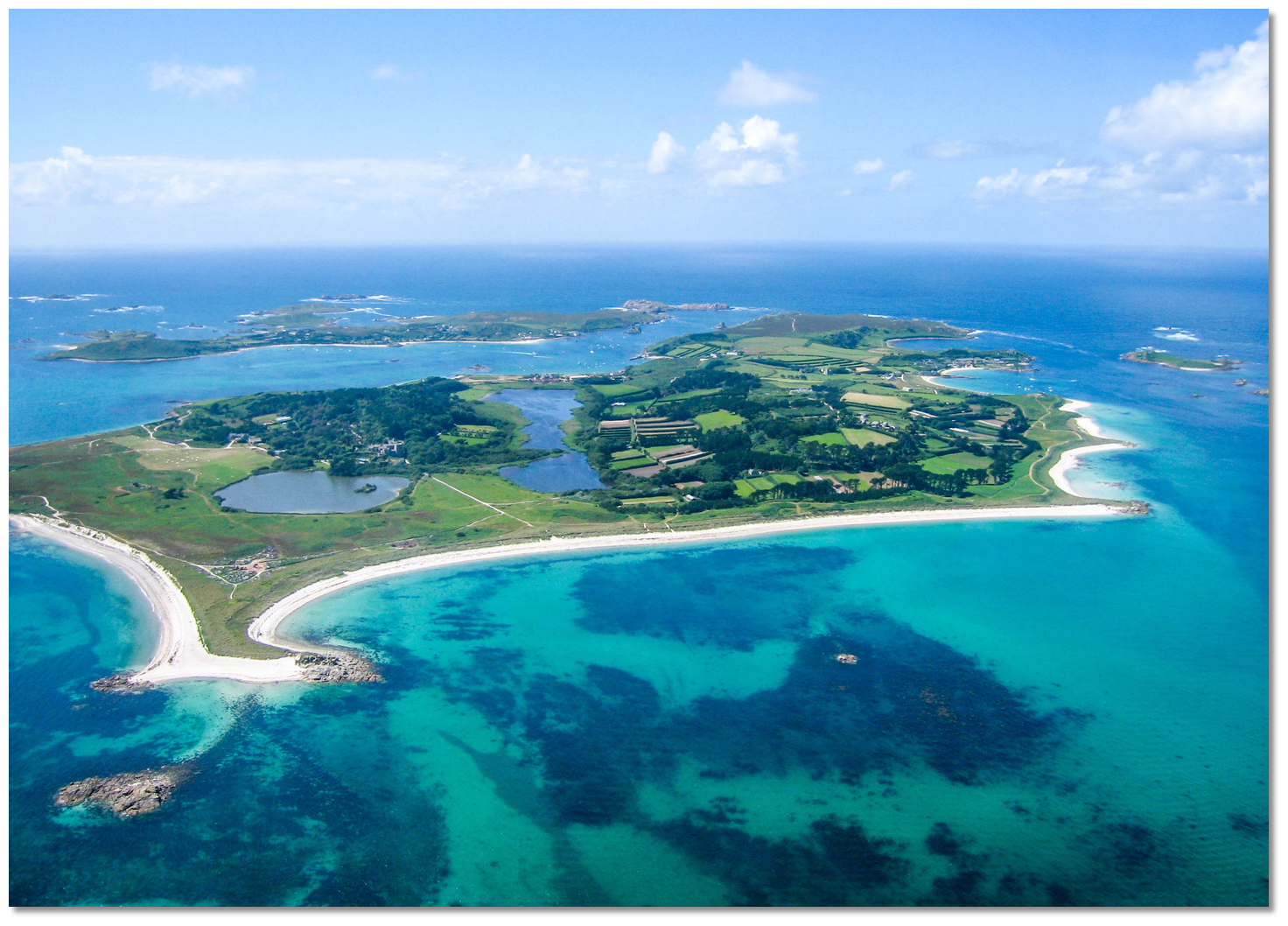 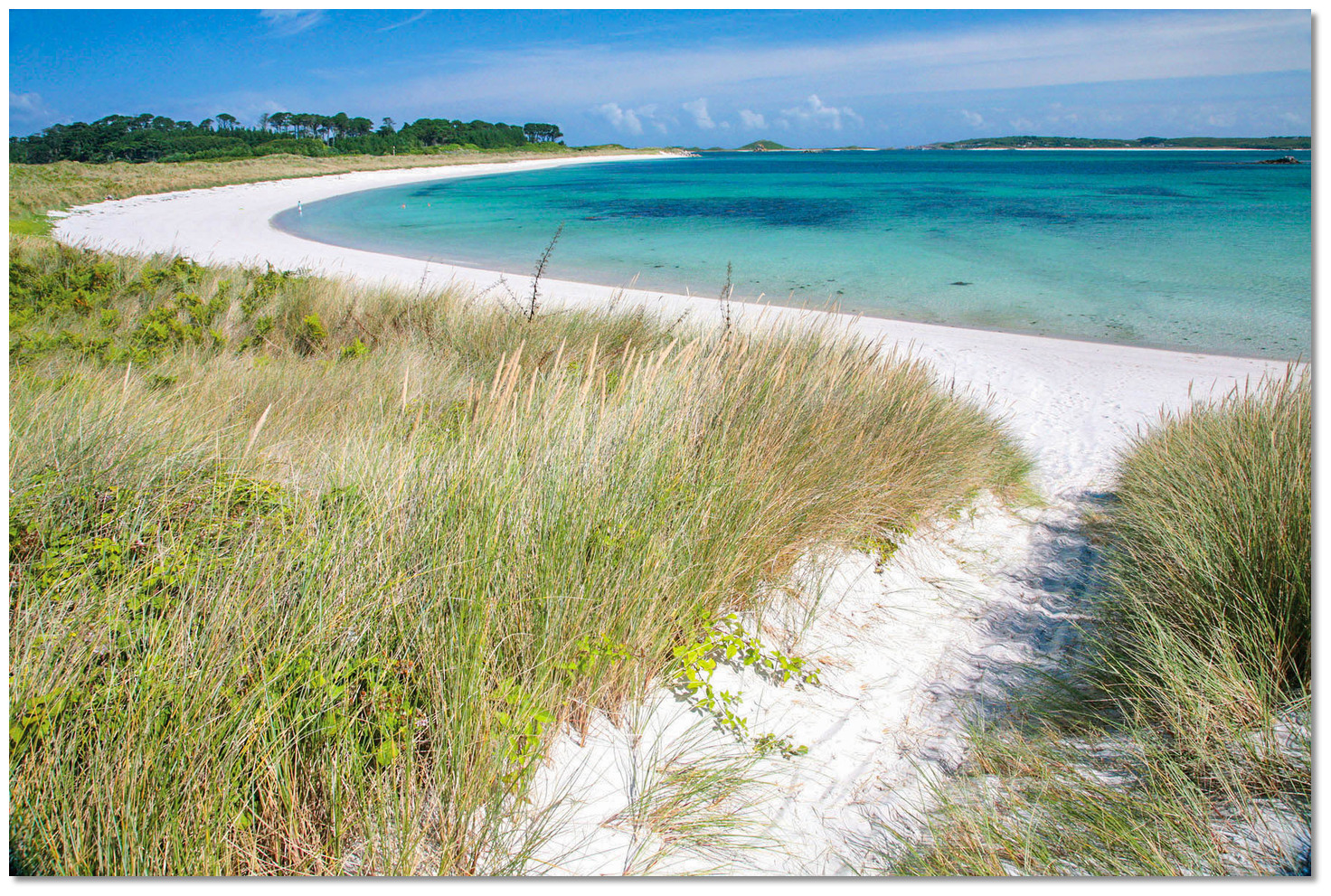 Lizard Point as seen from the centre of Pentle Bay
Image: Visit Isles of Scilly 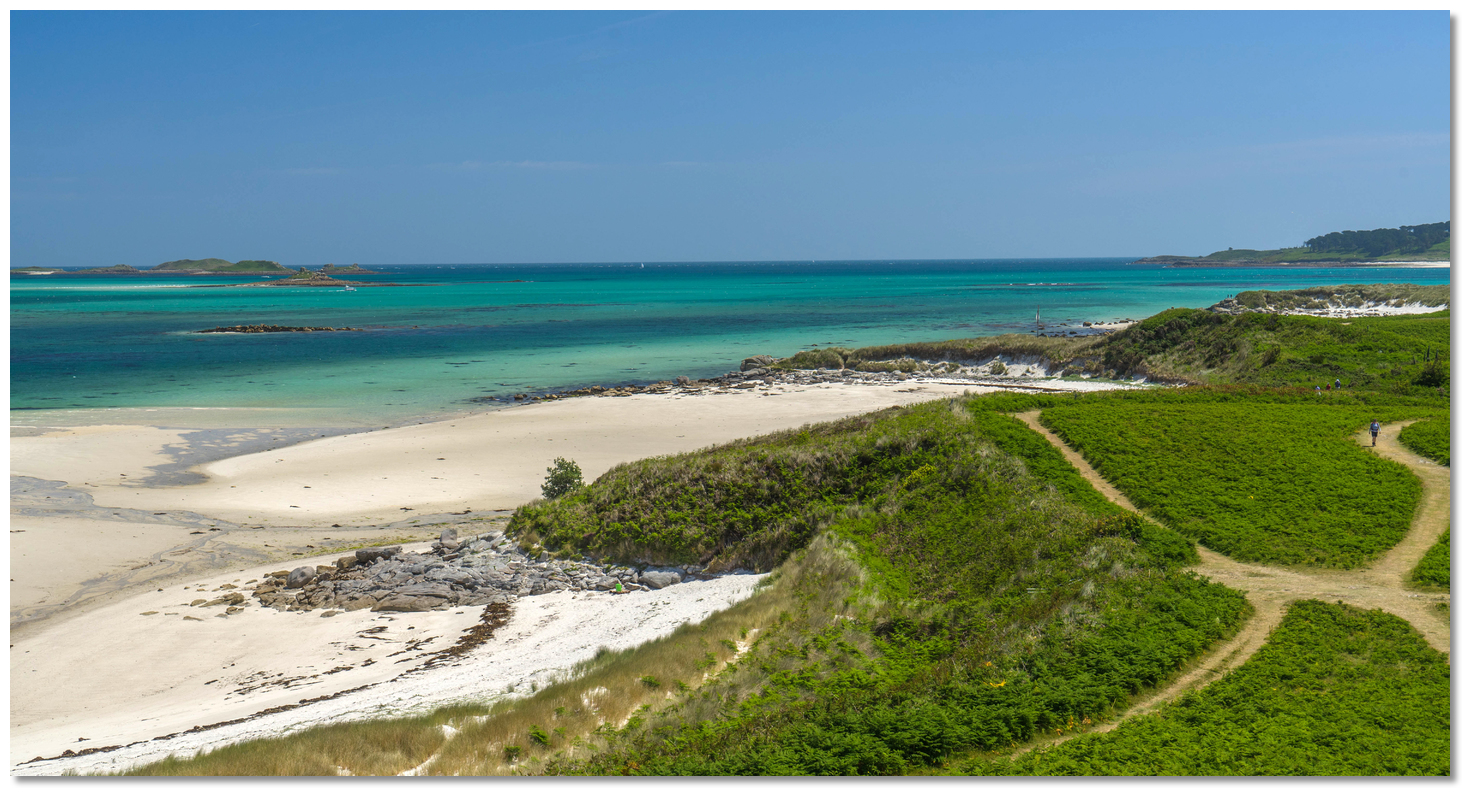 It continues 200 metres off of Rushy Point, which may be readily identified by its yellow-diamond-shaped post (marking an underwater cable), and Great Cheese, drying to 3.1 metres, a ¼ of a mile eastward, to a position 80 metres west of Lump of Clay Ledge that lies close east of Little Cheese. 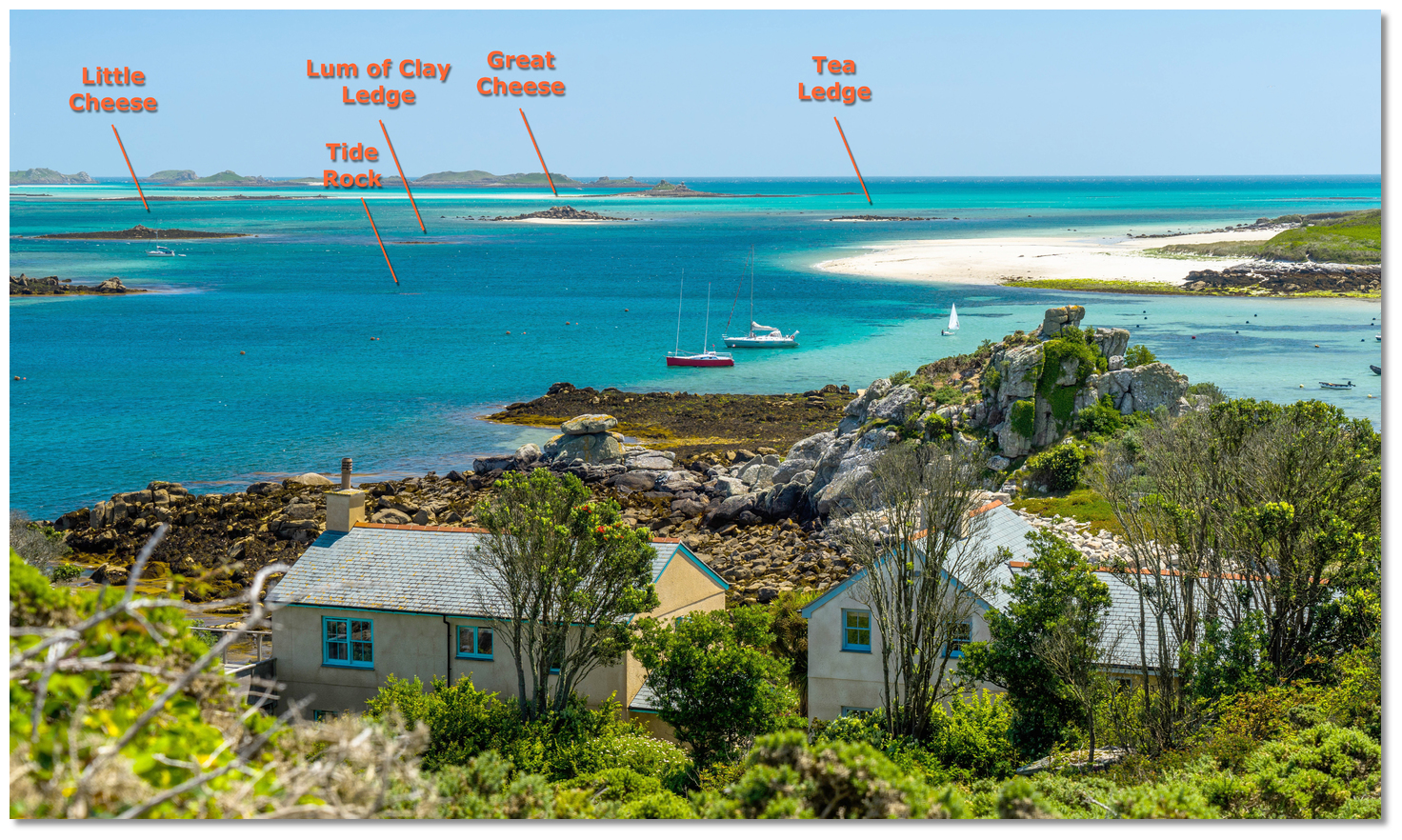 It then turns west by northwest to pass north of Cook's Rock, that dries to 4.3 metres, off Block House Point, into the southwest end of Old Grimsby Harbour about 60 metres south of Tide Rock. Tide Rock, that dries to 1.4 metres LAT, is the primary covered hazard at the southern end of the harbour. It lies about 100 metres inshore of the 3.8-metre rock on the western extremity of Long Ledge on a line between Block House Point and Peashopper. 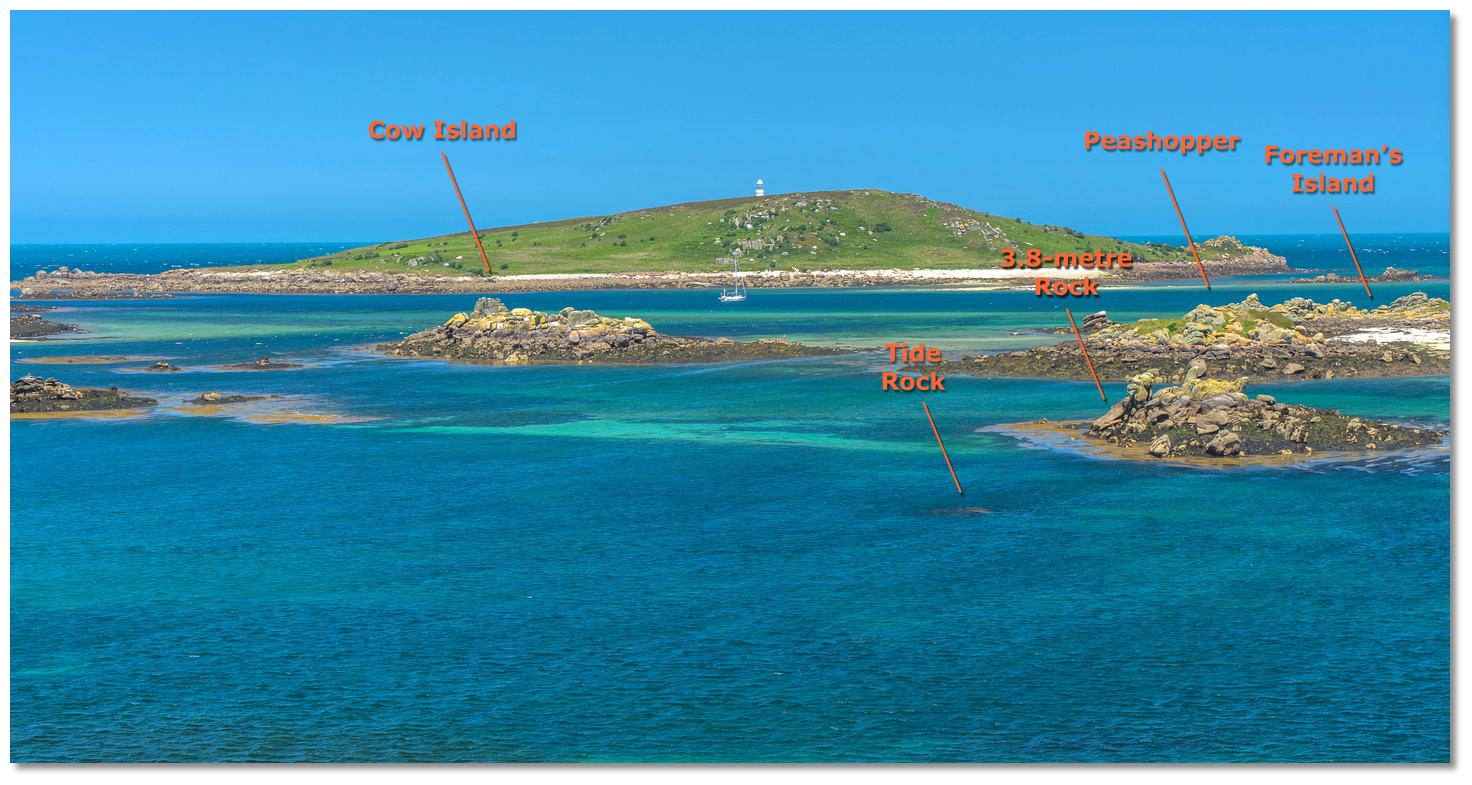 From here simply steer for the mooring buoys off Old Grimsby Harbour and pick up a Tresco Estate buoy or anchor off. 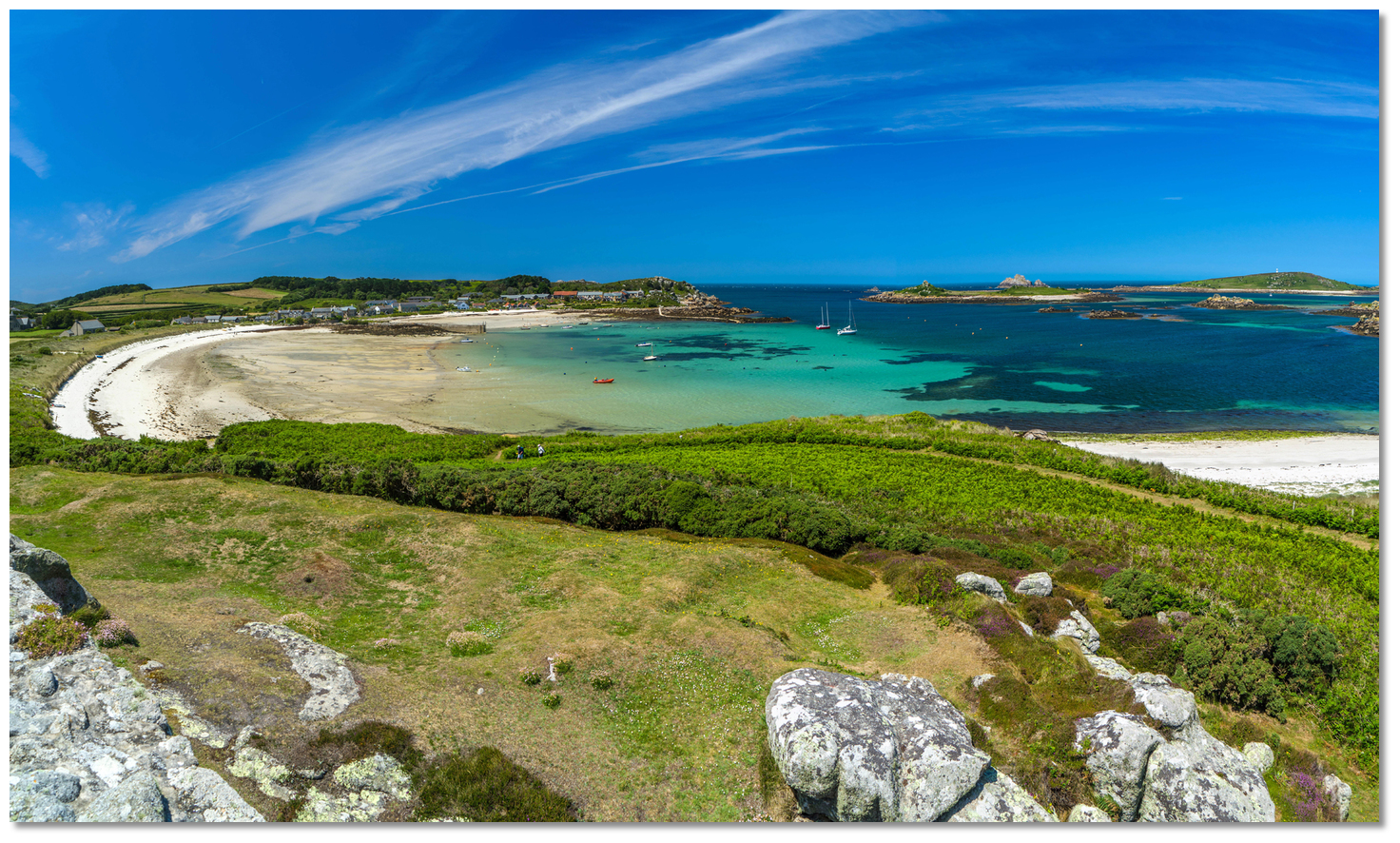