This is a coastal cut through the middle of Donaghadee Sound that separates the mainland coast from Copeland Island 1-mile northeastward.

This cut is through the marked shipping channel, but it cannot be recommended at times as it is subject to strong tides that can attain rates of up to 4.5 knots in both directions.

Cutting between Copeland Island and the mainland coast shortens the distance for those entering and exiting Belfast Lough by about 5 miles. Moreover, taking it with a favourable tidal stream speeds this passage. 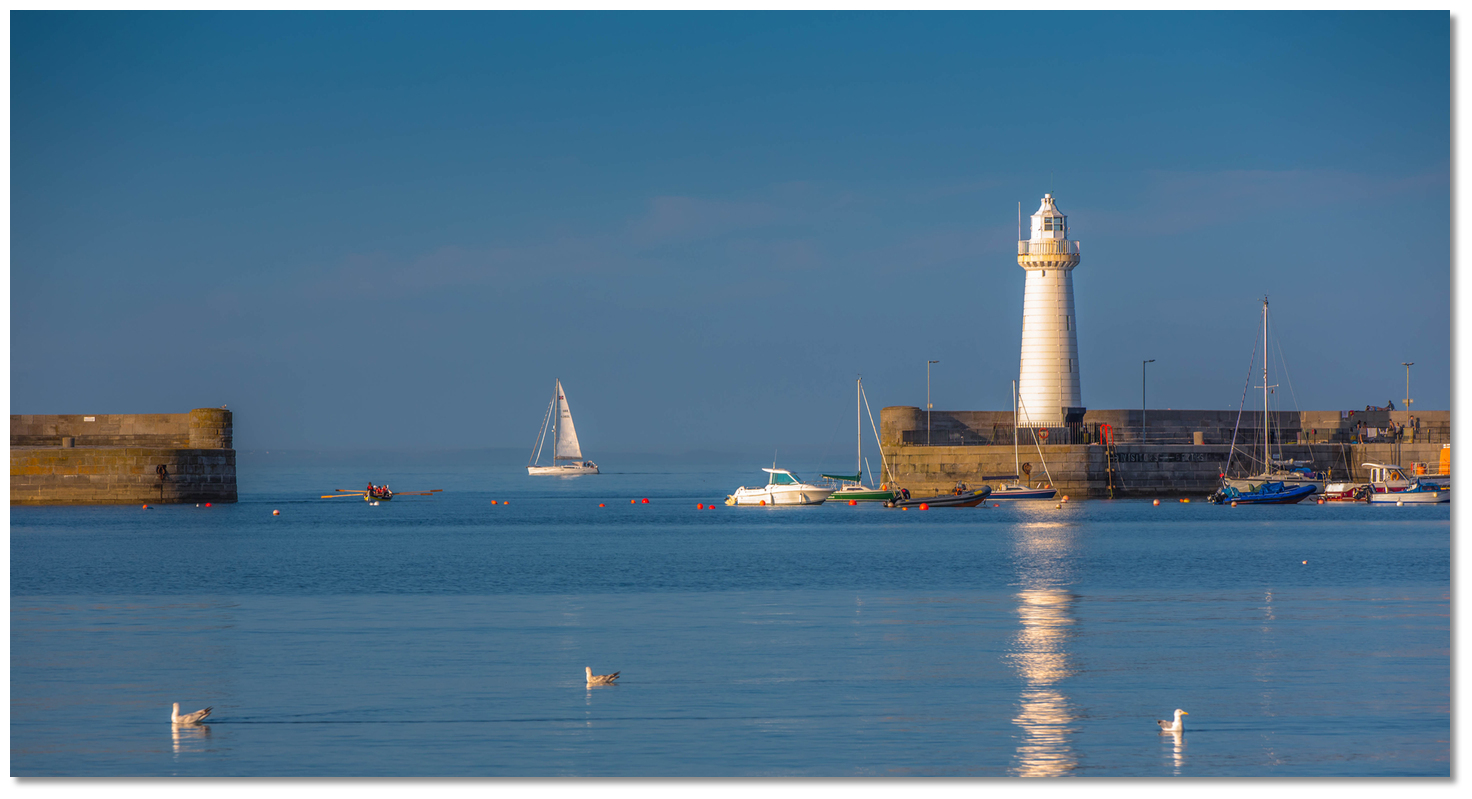 Conversely, as these currents run in both directions, at the wrong time, a foul tide makes it unviable for vessels that cannot make 10 knots and occasional heavy rips would frustrate the best of vessels. In this case, it would be best to pass outside the islands.

Today's summary tidal overview for this route as of Friday, December 2nd at 03:50. In Donaghadee Sound, the streams run in about the direction of the channel though their rates vary in different parts of the sound and may be as much as 4½ knots at springs in each direction. The tide turns earlier than in the open sea with the first of the flood sets through Donaghadee Sound and between Copeland islands at a rapid rate. It then sets through in a 130° direction from 04:45 hours after High Water at Dover until 01:15 hours before the following high water. Then it sets in a 310° direction from 1 hour before until 5 hours after High Water, at a rate of about 4.5 knots at springs, or even stronger in places at times.

Donaghadee Sound is situated between the south side of Copeland Island and the mainland coast. The southeast entrance of this passage is encumbered with several rocks and there are also hazards on both sides of the Sound off Copeland Island and particularly the Foreland Spit on the mainland. The tidal currents can attain rates of up to 4.5 knots in both directions so this is all in a fast-moving body of water that needs some attention. 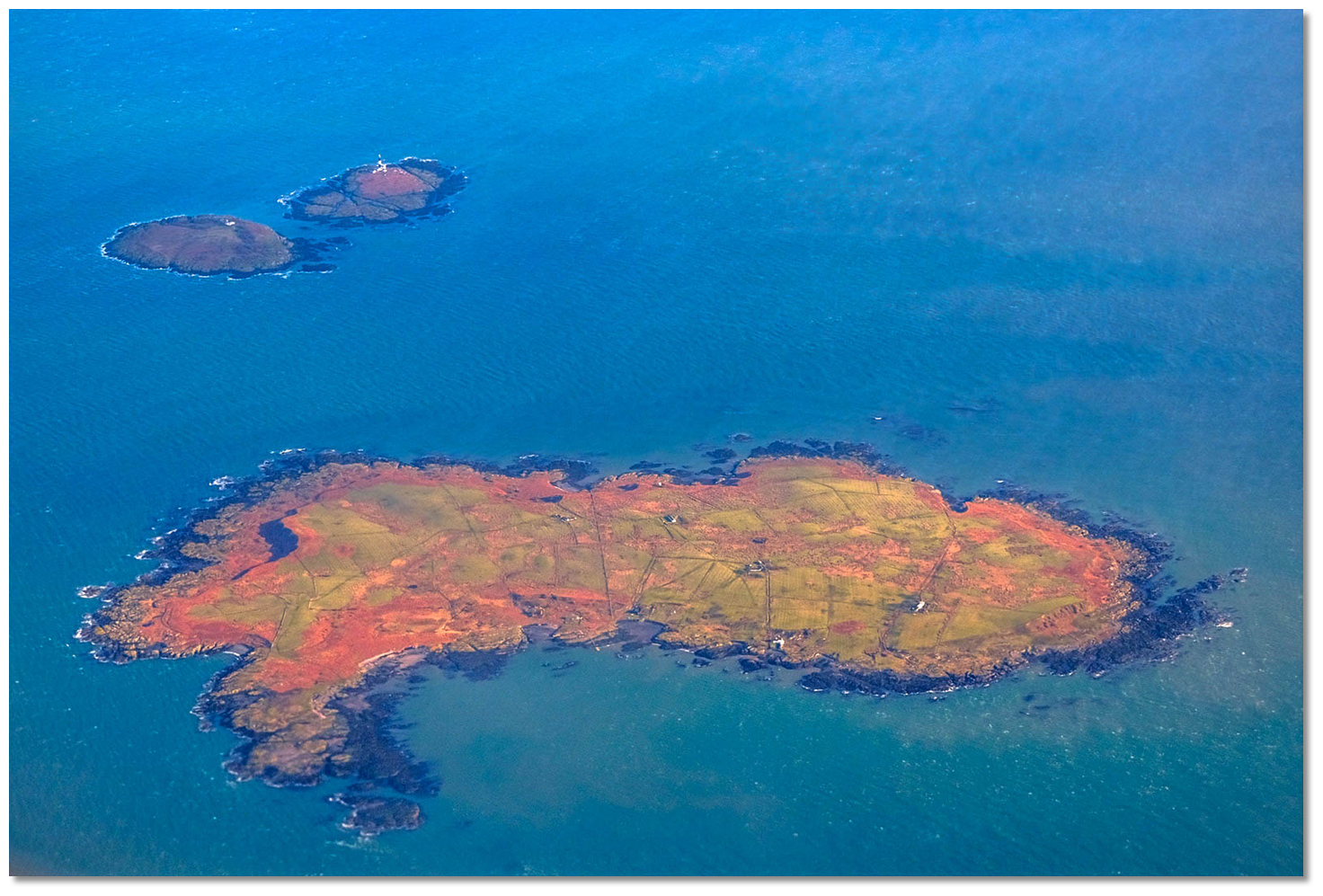 However, Donaghadee Sound is 1 mile wide. The fairway channel leading through it can almost be described as a straight line, it has no less than 6 metres of water and it is marked by lighted lateral buoys. So, provided tidal streams are favourable, Donaghadee Sound is the normal leisure craft route along this coast.

Tidal planning is however essential because of the strong tidal streams and great care should be taken during the passage. Beware of heavy rips that are caused by the above-described back eddy and shoals in its southeast end. These can amount to overfalls at times that could extend across from Foreland Point to the southeast end of Copeland Island. Particularly so in the constriction close northeast of the Foreland Spit buoy.

Vessels cutting into Donaghadee Sound around Copeland Island from the northeast will encounter the most dangerous unmarked rocks off Copeland Island, particularly the awash Rid Rock off the west side of Chapel Bay. A drying area extends a ¼ mile southward from Copeland Island’s southwesternmost point. This terminates at the continually exposed Carn Point which is 1 metre high. Foul ground then extends a further 200 metres southward from Carn Point to Rid Rock situated 200 metres south by southeast of the tiny islet.

Copeland Island and Carn Point (right) as seen from the west
Image: Drone across Ireland in 4k

Rid Rock is particularly dangerous during the southeast-going stream that sets on to it. Therefore, vessels approaching Donaghadee Sound from the north are best advised not to cut in and to take the entrance waypoint as described standing well off of Copeland Island. 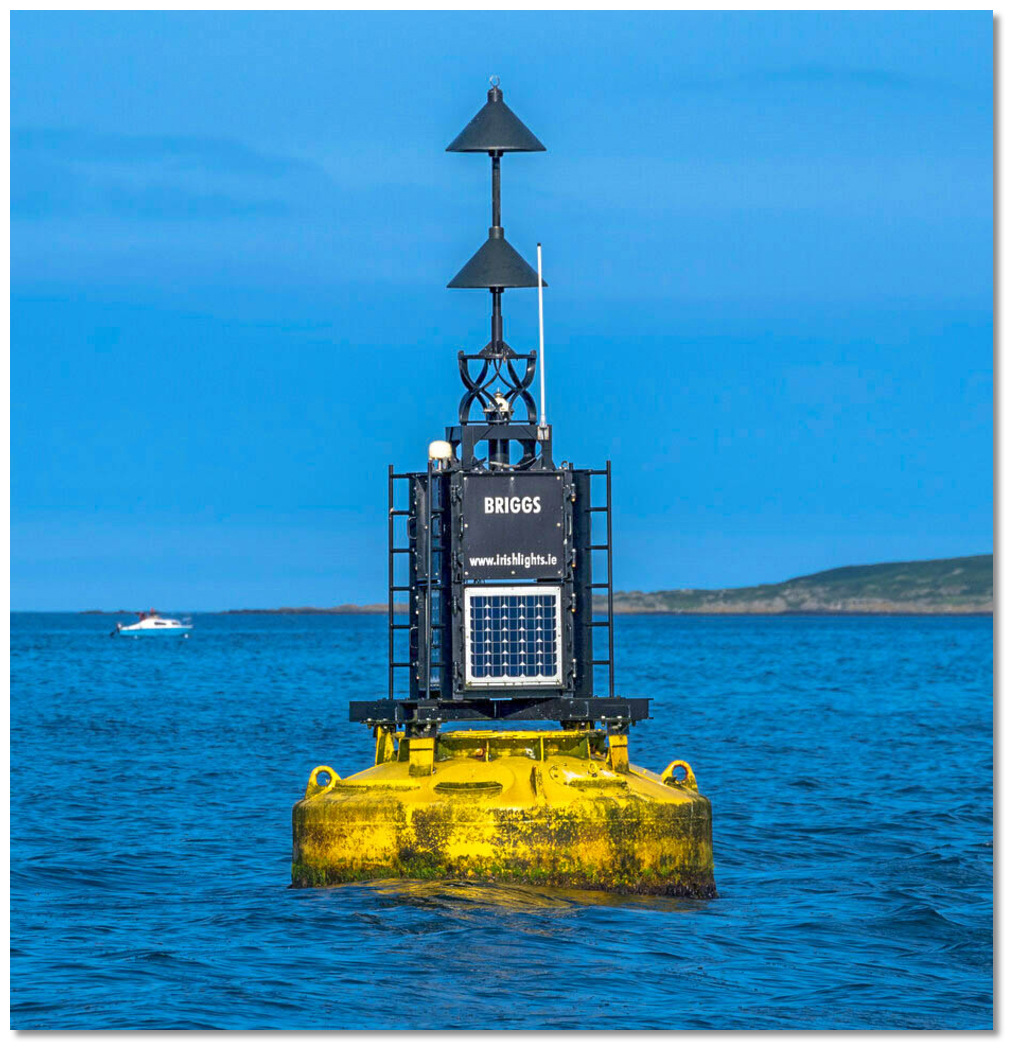 Vessels approaching from Belfast Lough should pass well to the northeast of the Briggs North Cardinal buoy and at least 250 metres clear of the area to the north of Orlock Point. Then continue southeast into the suggested channel through the middle of Donaghadee Sound.

Vessels approaching from the southward may avail of a favourable back eddy from Ballyferris Point. At the southeastern end of Donaghadee Sound, a line of shoal water extends from Foreland Point more than 1,000 metres in a northeasterly direction to Copeland Island, causing a separate northward running back eddy south of the Sound. This commences at 02.30 hours before High Water at Dover, and this north-going eddy lasts for 9 hours, or until 06.30 hours after High Water. It is rotary in a clockwise direction and does not exceed 1½ knots. At Ballyferris Point it is narrow but it then widens out to about 1½ miles from the shore and turns the southeast-going current through Donaghadee Sound to the eastward and northeastward. When it meets the main tidal stream off Mew Island where it forms the Ram Race.

This inshore eddy or north-going tide is available for half the rising and the whole of the falling tides at Donaghadee. So effectively, a vessel approaching the Sound from southward will from Ballyferris point to Foreland point, can avail of another current quite close in, that runs 9 hours northward, and only 3 hours southward.

Vessels approaching from the east should stay outside and south of the islands, leave Mew and Copeland Islands well clear to starboard, and then the run into the harbour will be unobstructed. Copeland Sound, between the islands, is best avoided owing to the two challenging and unmarked rocky shoals called The Platters and Ninion Bushes. Of these Ninion Bushes, situated a ½ mile off from the northeast point of Copeland Island, is particularly dangerous with a wide area of awash rocks.

DONAGHADEE SOUND
Donaghadee Sound is marked by four lateral buoys, port marks off the mainland, and starboard marks off Copeland Island laid out for a northbound passage.

The first mark, in south-to-north order, is the Donaghadee Sound starboard buoy. This marks the head of a spit with a least depth of 2.7 metres LAT that extends a ½ mile southwestward of Carn Point.

The first mark to steer for is the Foreland Red Can Buoy located 2 miles southeast of Orlock Point. This marks the very dangerous hazards off of Foreland Point. Foreland Point, nearly ¾ of a mile northward of Donaghadee Light Tower, is foul, and the rocks, which extend 300 metres off it in a northeasterly direction, dry from 2.4 to 3.3 metres at low water. The outer part is detached and is marked by a conspicuous unlit port perch. About 400 metres northward of the perch is the very dangerous and detached awash Foreland Spit rock. The Foreland Red Can Buoy is moored about 150 metres northward of the Foreland Spit rock.

400 metres southeast of the Foreland Spit rock are the covered Governor Rocks that have 1.9 metres LAT over them. This is then marked by the Governor Red Can Buoy moored 200 metres eastward of the rocks.

The principal dangers of this passage for leisure craft are all to the southwest of a line through these two red buoys. So it is essential to keep on the right side of that line.

On the opposite side of the channel are the Deputy Reefs which are nearly midway between Foreland Point and Copeland Island. These consist of three reefs with the least depth of about 2.2 metres LAT. Beyond these are Magic Rocks, three rocks, with from 3.7 to 4.6 metres of water, that are all of small extent. They extend in a line across the channel northward of Deputy Reefs. All of these are marked by the Deputy Starboard buoy moored 150 metres southward of the Deputy Reefs. 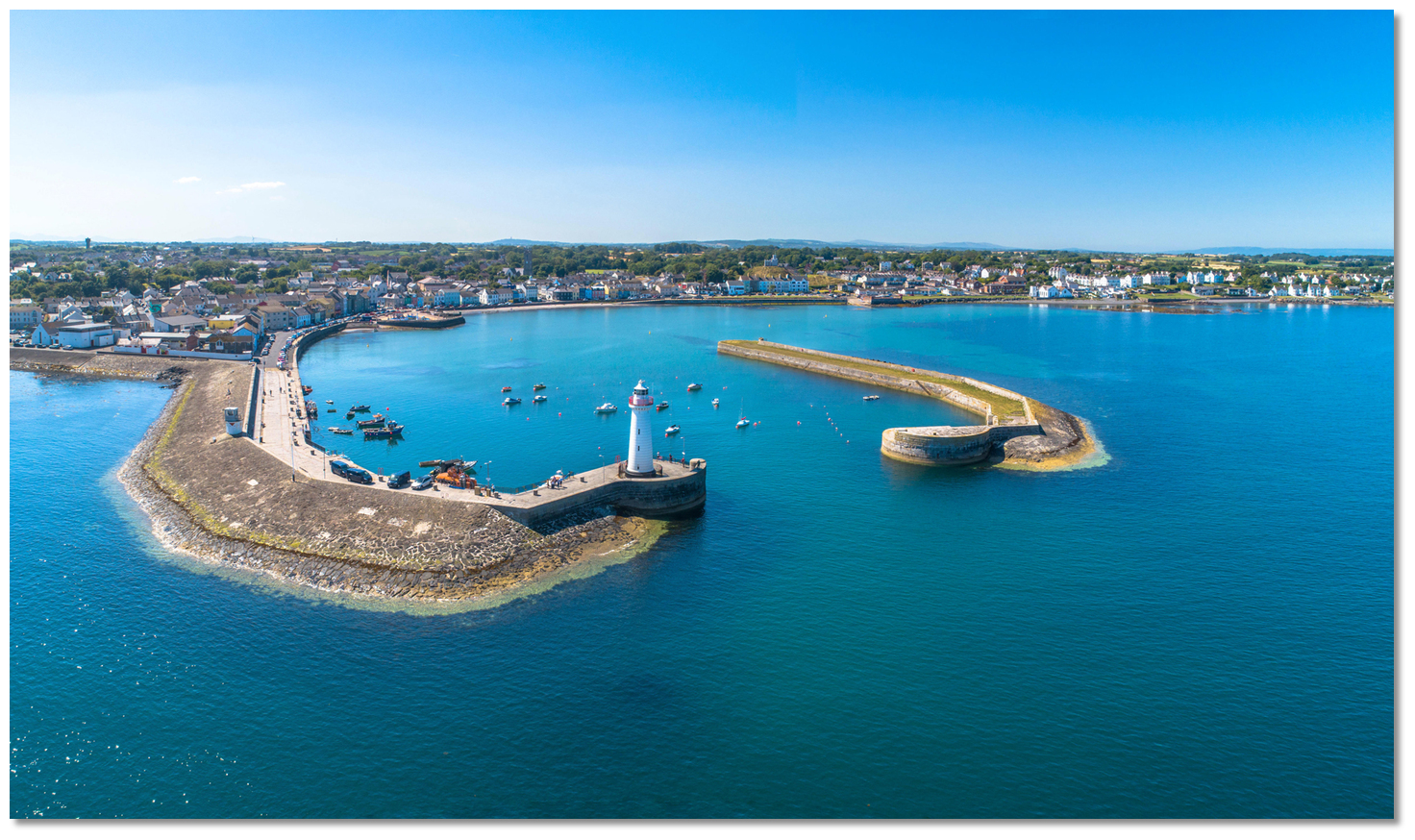 Pass the Foreland buoy on its eastern side and realign to pass west of the Deputy starboard buoy. Continue southeast to pass between the Deputy and Governor buoys. Heavy rips, amounting to overfalls at times, may be experienced in this part of the passage. 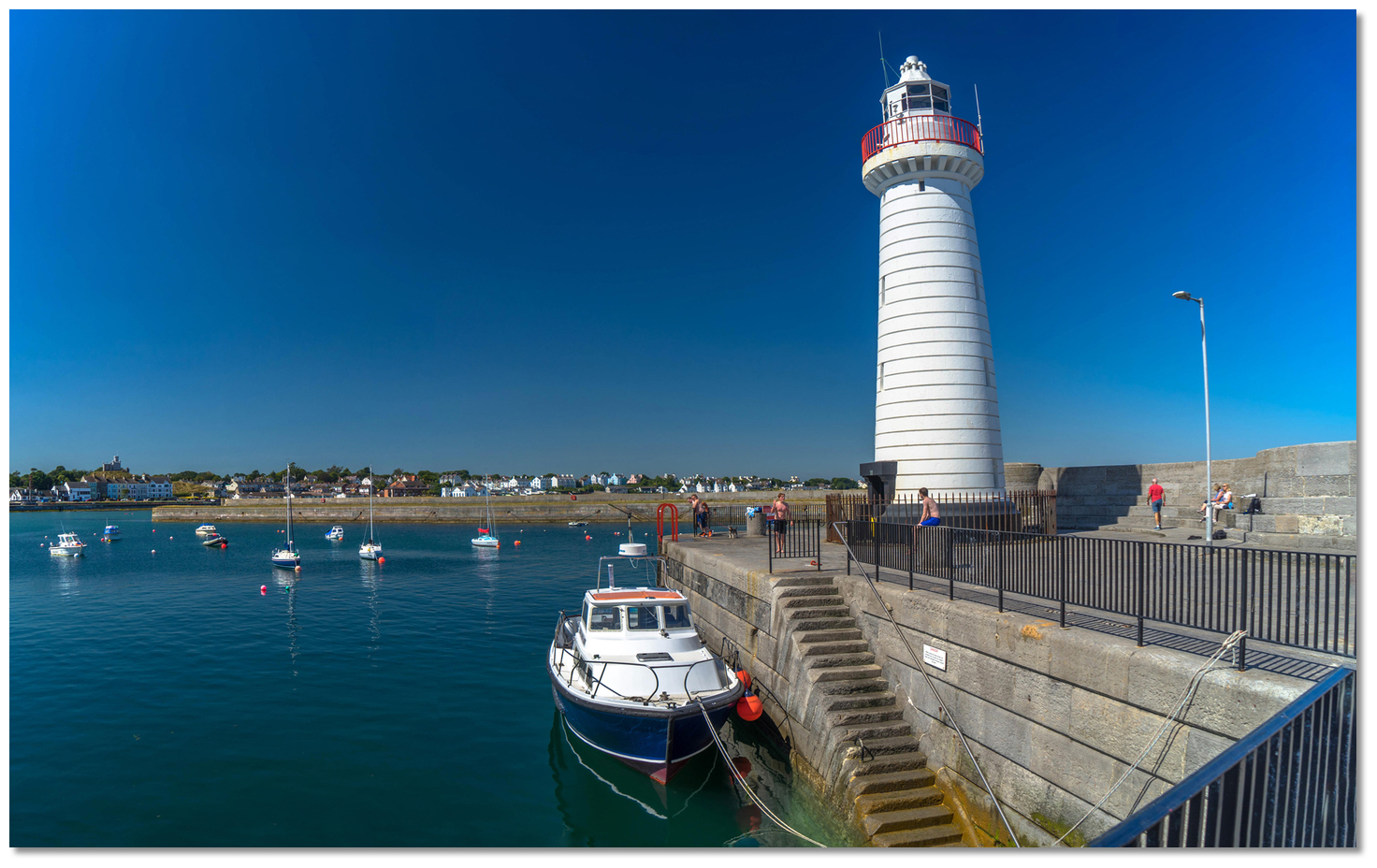 lies about ¾ a mile south of Governor Buoy and the same distance southeast of Foreland Point. It is made readily identifiable by its substantial lighthouse and piers and it makes an ideal tide wait location for Donaghadee Sound. The harbour's single visitor berth is to be found immediately inside and to the southeast at the end of the South Pier beneath the light tower.

May to September is the traditional Irish Sailing season with June July offering the best weather. June and July’s statistical incidence of strong winds are however two days of winds up to force seven. As such, depending on personal sailing preferences, a vessel may expect to be held-up or enjoy robust sailing conditions. Ireland is not subject to persistent fog. Statistically complete days of persistent fog occur less than once in a decade.

Never an issue known to have occurred off the Irish Coast.