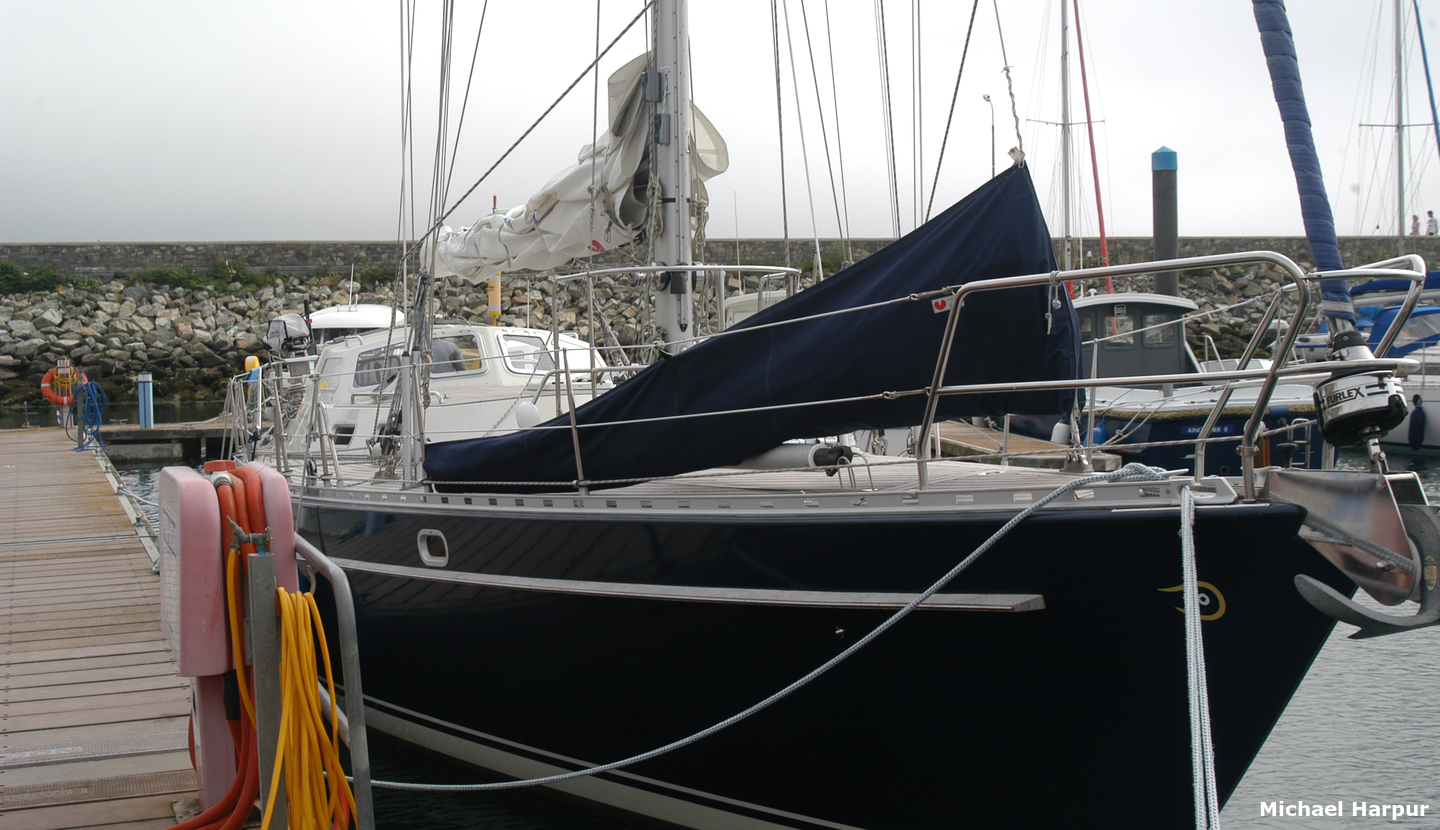 When it happens most cruising sailors are completely taken aback by the vessel's sudden lack of upwind performance when set against a vessels theoretical pointing capability, or one experienced previously when leisure sailing. Most blue water cruising boats seem to suddenly defy logic and refuse to point effectively.

The difference is the added equipment weight of the expedition and household equipment that the boat has taken on, it effectively kills off the vessels upwind performance. This comes as a surprise to most cruising sailors causing problems when they are forced to go upwind to reach their destination.

An upwind leg will come to almost every voyage at some stage. Poor performance in addressing it could add days to a passage or even make a destination unreachable. Poor upwind performance could also place a vessel in jeopardy on a lee shore. 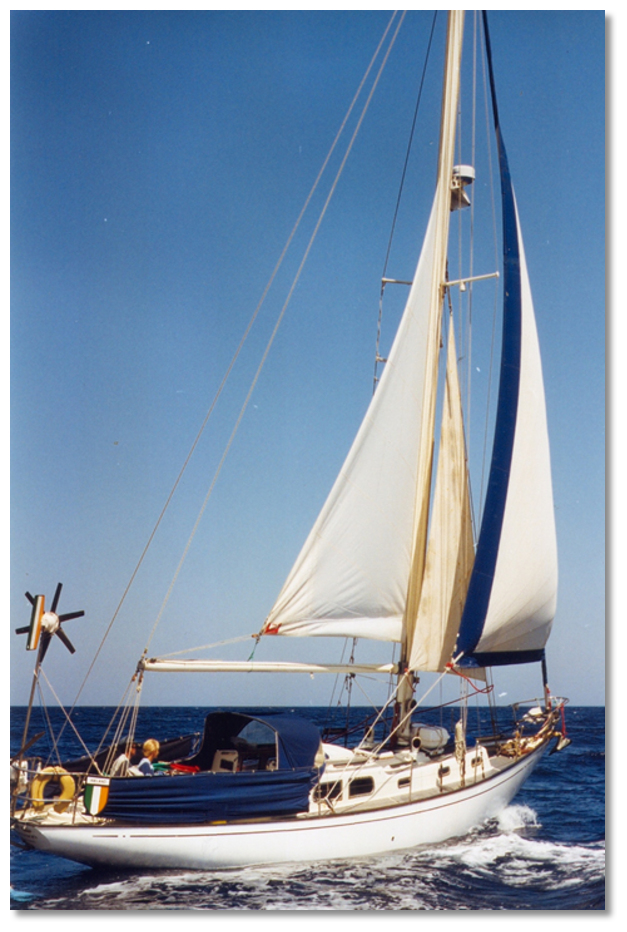 Sailing with an improvised inner foresail
Photo: Michael Harpur
What helped our upwind performance enormously was adding a simple improvised inner foresail, or staysail, what our American friends call a 'Yankee Pair', that occasionally turned our classic sloop into a cutter rig. This set-up is also well-known in cruising circles, rather humorously, as a Slutter being the conjunction of 'sloop' and 'cutter' rigs, really saved us when we had to go to wind.

On the way back home during our circumnavigation, we were dead in the water with our weight and tired and baggy old furling genoa. This was never worse when it was wound in too much for it to set properly, which we invariably had to do going upwind. We found adding an improvised inner foresail effectively turbo-charged our upwind sailing capabilities as the two sails created a 'slot effect' which gave us the lift we so badly needed to push upwind.

Historically, the cutter rig was a very popular sail plan. This was back before furling gear and modern synthetic fabrics when sails were far more stretchy and difficult to deal with. Then the smaller the sail the less stretchy they were and easier to handle which made the multi-sail cutters the better boat to go windward. Sail reduction on cutter rigs was also much easier by simply removing a jib, one of two, no reefing required. But the newer technologies deployed on modern sloops, such as low stretch sailcloth, geared winches, roller furling headsails and their inherent convenience largely consigned the traditional cutter rig to the past. Well-appointed modern sloops of today are much easier to handle and are generally closer winded.

It was a surveyor of traditional yachts that suggested the idea to us before we departed. Being a classic fibreglass boat our vessel was vastly over-engineered and had no problem taking the extra load on the foredeck. All that was required in terms of rigging was a heavy duty through-deck U bolt with a large pad under the attachment point to spread the load as far as possible. This was at the point of contact with the bulkhead so that the added strain was also taken on the bulkhead and down through to the keel rather than on the deck. We connected this to a similar simple eye attachment on the mast at the crosstrees level. Many boats already have an inner forestay or baby stay, used to prevent the midsection of the mast pumping back and forwards in a big sea, that can be used directly.

Charles Doane covered the structural aspects of this very well in his cruising sailboat rigs page but if you are considering this it is important to take professional advice when fitting out. The connections points have to be supported as if there is no support under the foredeck it may lift or deform with the tension on the stay. Likewise, the mast needs to be properly supported for the additional load at the crosstrees. It this is not possible a possible alternative is to run a line from the masthead, but again take advice.

With the two attachment points in place, we got an old discarded mainsail made into a high-cut staysail and added a dual block rig and wire cable as illustrated below. 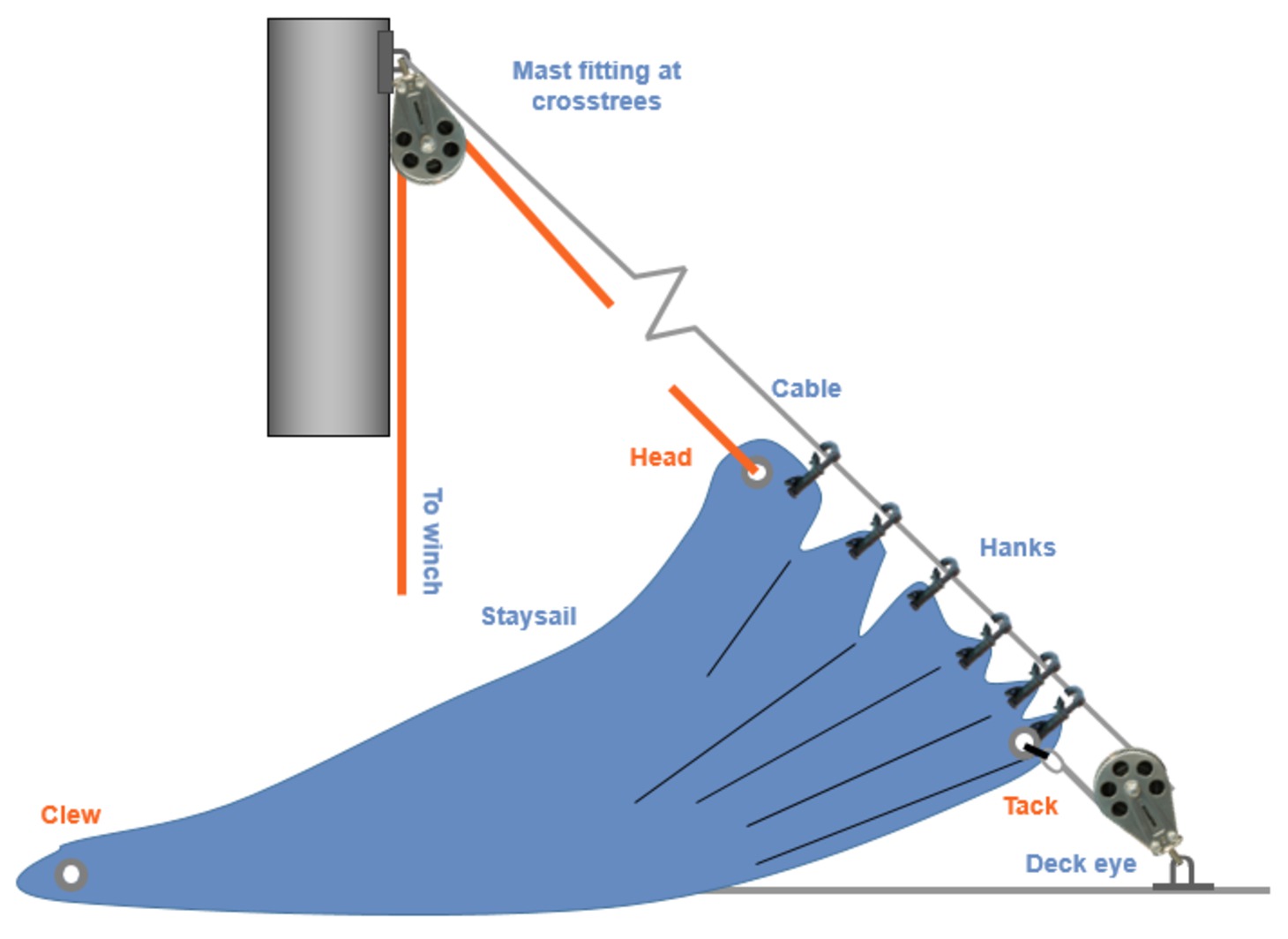 Once in place, all we had to do was to connect and crank in the spinnaker halyard which both hosts the sail up and, as it is wrapped around the lower block, tensions the wire stay. We then ran the staysail sheets through an existing thimble in the mainsheet block which was perfectly adequate.

Trimming was straightforward, in essence, the outer jib should match the trim on the inner staysail. The staysail was trimmed by a rudimentary line attached to the sheet, traditionally called a 'Barber Hauler', that is attached to the staysail's sheet at one end and then made off to a convenient deck strongpoint. Shortening this line enabled us to alter the angle of the lead to the staysail. We used a cleat, on the opposite deck, which made it easy to adjust and belay the line whilst also enabled us to achieve the closest sheeting angle to the boat's centreline. Hence no additional cars or tracks are needed for this simple but very effective additional sail.

In practice, the sail arrangement was very simple to implement. Best of all it could be tied off to the side when not required or more conveniently stowed away to be shackled in place as required. We only attached ours when we needed it as, after living aboard for three years, we had eliminated anything in the rigging that could unnecessarily clatter about. This meant the systems attachment required a visit to the crosstrees attachment point as well as the one at deck level which, although never a pleasure in a seaway, was somewhat accommodated by having ratlines.

The staysail almost always provided lift once the boat is slightly off the wind and worked well until the wind is well abaft of the beam. You may have to bear away a little more than you would normally because the headsail cannot be pulled into its maximum. The slots of two headsails need to be kept open enough to permit a good airflow and bringing the genoa in as close to the centerline of the boat as possible stalls out the slot. So you have to ease the sheets a little to get all three sails to fill properly, but this should be made up for by the speed, or in our case, finally, the power to pull our weight.

The staysail was useful when the wind increased also because it kept the sail plan of the boat low and centred as the headsail and main were progressively reduced. The rolled genoa sail area could be easily reefed until the staysail alone was left and when it blew up we tended to remove the heavily furled genoas first as it tended to push the force too far upward on our boat. I also liked to secure that early for fear it could spill out or seize under load. The full staysail then combined with a reefed mainsail provided a very compact heavy weather rig for us. When all went to hell, we simply lost the main and substitute the staysail for a smaller storm jib.

This is a set up however for the fun-loving performance sailor. You will not get as close to the wind as lightweight performance sloops with nice flat genoas can. If you are sailing in a tight area with lots of tacking, the staysail gets in the way of the genoa, which is a pain, and it also has to be tacked with its cumbersome Barber Haulers trimming arrangement. On deep broad reaches and when heading downwind, it provides no benefit at all and only serves to reduce performance by disrupting the air to the genoa.

But with heavier cruising boats that carry extra weight and are generally associated with less performance oriented underbodies, the improvised cutter rig has to be considered as a useful addition to provision to the vessel from my experience. When you are in for a prolonged, long and deep tack campaign, such as negotiating ones way up the Red Sea, it is the perfect tool to deploy for very little money and I would never leave without having it available to me. Some boat's such as pictured, above on the header, fully incorporate the sail having it in a bag on deck.