Cruising on a modest sail wardrobe

A cost-effective cruising boat purchase may not come with the perfect sail wardrobe.

Sails are highly expensive and an upgrade decision needs to be weighed carefully as it may consume all, or at least a large portion, of the cruising budget.

When I prepared Adriana for her modest odyssey, a three year cruise of the US eastern seaboard and a windward slog to the British Virgin Islands, an important consideration was the sail wardrobe and sail handling system. Funds were limited and, in any case, simplicity was my mantra. Here is what evolved.

Adriana did not enjoy the luxury of roller-furling headsails; her jibs were hanked on and sail changes involved a trip to the foredeck. Purists and minimalists admired this arrangement but to me it was simply a matter of cost: Headsail furling would have set us back the equivalent of six-months cruising funds.

The160% genoa, the 120% genoa and our working jib all lived on the foredeck in canvas sail bags. One sail was always hanked on and could be bagged on the forestay; the other two were bagged and hitched to the pulpit. At anchor, the three sail bags provided the most comfortable armchair on the boat and I spent many a happy hour lounging therein, watching the world go by.

Each sail had a tack pennant long enough to allow a new sail to be hanked-on before the previous sail was removed from the stay, minimising the time that Adriana was bare headed. I lusted after a double forestay arrangement but I never got around to fitting it. Had our journey been downwind I would most certainly have put in the money and effort to do the job because flying twin headsails is undoubtedly the most efficient way of running before the trades.

Our storm jib, bagged with its dedicated sheets attached, was stowed in the lazarette, along with our storm trysail and nylon drifter.

After much deliberation Adriana's new mainsail was batten-less, roach-less and headboard-less. The slight loss of sail area was insignificant compared to the blessing of low maintenance and handle-ability, and actually helped to correct Adriana's natural weather helm. This 8 oz. soft Dacron sail had a single reef which halved the area and could be put in quickly and easily with a simple jiffy-reefing system. The mast track was external and regular waxing ensured that the mainsail rattled up and down with ease. A separate track accommodated our bullet-proof storm trysail which was set loose footed and sheeted to the mooring cleats on the aft quarters. The wire tack pennant on this sail was long enough to ensure that the trysail cleared the boom and furled mainsail.

When the main was furled, the Sitka spruce boom rested on a sturdy boom-gallows and was held firmly in place by the mainsheet. A boom gallows is a vital piece of equipment on a cruising boat: Apart from holding the boom securely in place when the main is furled it gives a great sense of security to the helmsman to know that a careless gybe will not take his head off, even if it does deliver a tremendous whack to the gallows uprights; it provides a secure attachment point for hip lines running forward when the going gets tough and it is a great place from which to hang coils of line, instantly ready for any contingency, as well as looking satisfyingly cruiserish.


Adriana had no mainsheet track - her boom was controlled by a sheet and block arrangement running from the boom-end to pad-eyes on each side of the afterdeck. We had fewer permutations of mainsail trim but we had no mainsheet traveller bisecting the cockpit, an irritating arrangement I have endured on many modern boats. I have no objection to a traveller if it can be accommodated on the cabin top, using mid-boom sheeting perhaps, or on the afterdeck, although this latter arrangement implies a disproportionately long boom.


Our boomvang was a block and tackle with snap shackles on each end to attach to the boom bale and to a u-bolt at the base of the mast. By unclipping the vang from the mast and attaching it at the appropriate toe rail it served both as a preventer and a vang when running downwind. The tail was led back to the cockpit so that a gybe could be executed without the need to go forward. Once the boat was settled on the new tack the boomvang could be transferred to the opposite rail. I was initially concerned that this arrangement, found often on American boats, would be inadequate as a preventer but it proved to be man enough for the job even in strong winds.


Running in light and moderate winds we would pole out the genoa or drifter. The inboard end of the aluminium pole ran on a track mounted on the forward face of the mast and when not in use the pole was hoisted to the top of this track and its outboard end was clipped to the forward lower shroud at lifeline level. A topping lift ran from the outboard end of the pole to a block on the mast above the pole track and back down to a cleat at the base of the mast. To deploy the pole it was unclipped from the shroud, clipped into the clew of the sail and then the inboard end of the pole was hauled down the mast track. Like magic the pole would swing out to horizontal, supported by the permanently set up topping lift. 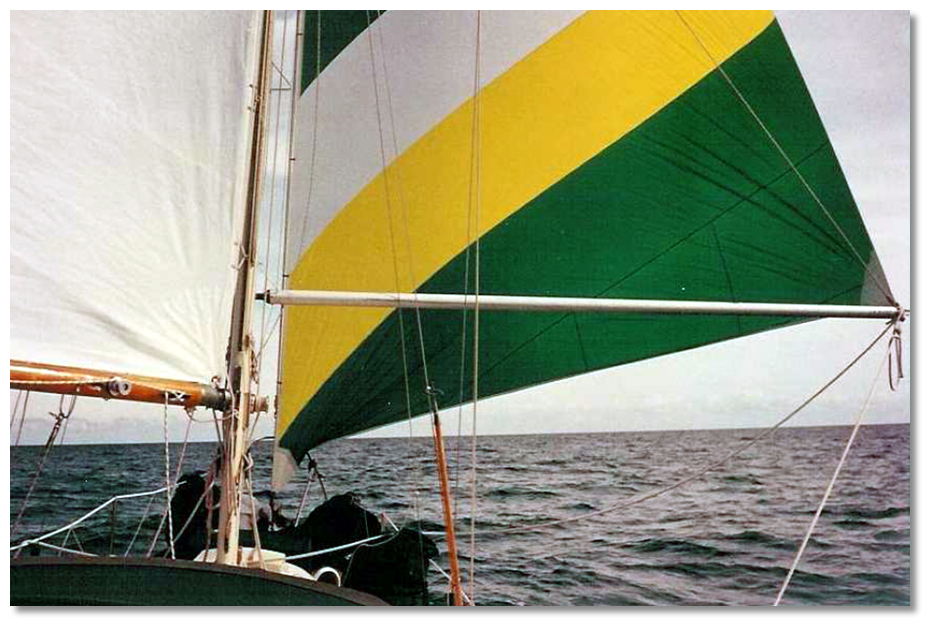 Wing and wing in the Bahamas
Photo: Salty John
I was inspired to place this modification high up the priority list by the vivid memory I have of the American boating journalist Dan Spurr, Adriana's previous owner, balancing on the foredeck with the spinnaker pole held in the manner of a medieval jouster, attempting to spear the clew of the jib as we rolled through a Chesapeake chop. After agonising minutes a lucky roll conspired with a desperate stab to connect the pole end into the jib sheet bowline. Now Dan had a tiger by the tail as the flogging jib tried to yank him off the deck as he fought to connect his end of the pole into the ring on the mast. When he succeeded and we barrelled off downwind, wing and wing, the euphoria of surfing at 8 knots was considerably dampened by the prospect of having eventually to detach the pole without losing the crew, the pole or the mast.


Detaching the pole with the new system simply required that the inboard end of the pole be hauled back up the mast track, which dragged the clew within reach so it could be released. We always tried to drop the headsail in the lee of the mainsail, so much less dramatic than rounding up through big seas, everything flogging wildly in the suddenly increased apparent wind. After a run under jib alone I would often raise the main to provide the lee into which the jib could be dropped, and the secret here is the battenless main which could be hoisted, snag free, off the wind. 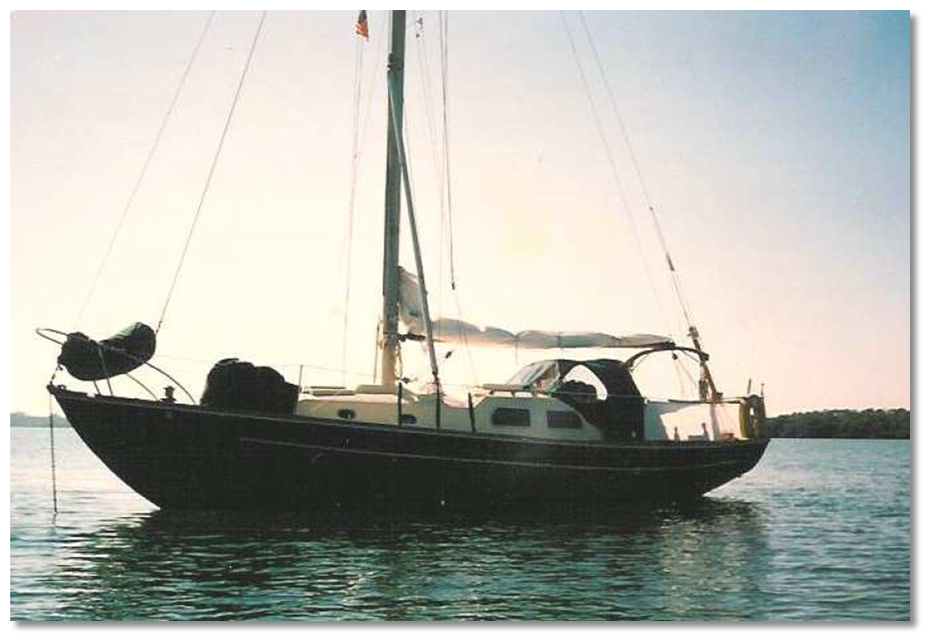 Stowed whisker pole, boom gallows and a jib
Photo: Salty John
I have experimented with jib downhauls from time to time, the attraction being that a trip forward beyond the mast can theoretically be avoided. You still need to go up there to bag the sail, though, and I find that the added complication is never quite justified. It is important when rigging a jib downhaul to use a very pliable braided line to avoid kinking. You attach the line to the halyard shackle, run it down to a small block lashed to the base of the forestay and then back to a cleat at the mast. The downhaul lets you keep control of the halyard as you stand back at the mast and haul down the jib. As I have said, I find it an unnecessary complication, but it does provide a means of hoisting your anchor light up the forestay and being able to pull it back down in the morning.


That then was the sail wardrobe and handling procedure on Adriana. I have never bought into the “lead everything back to the cockpit” school of thought because I’ve never found a reefing and sail hoisting arrangement that worked efficiently that way. All that extra friction, overly long lines and masses of line lying in the cockpit goes against my Keep It Simple, Stupid mindset. I can see the attraction of avoiding trips to the foredeck but stepping up to the mast should present little risk to the competent sailor.


On later cruising boats I have had headsail furling systems which worked faultlessly and did make those perilous trips to the foredeck unnecessary. However, I always have a slight concern about providing effectively for storm conditions. A detachable inner forestay from which a storm jib can be flown is my preferred system because it brings the centre of effort inboard, an advantage in heavy winds. This arrangement still leaves a sail on the outer forestay with the ever-present danger that it might unfurl which is a frightening prospect in a bad storm. Perhaps the availability of better weather information these days makes getting caught out by bad weather less likely, or at least it provides early warning so that the furling jib can be stripped off the forestay and stowed.

Header image with thanks to https://www.youtube.com/watch?v=KbO-BWOpZ5M">Wicked Salty.