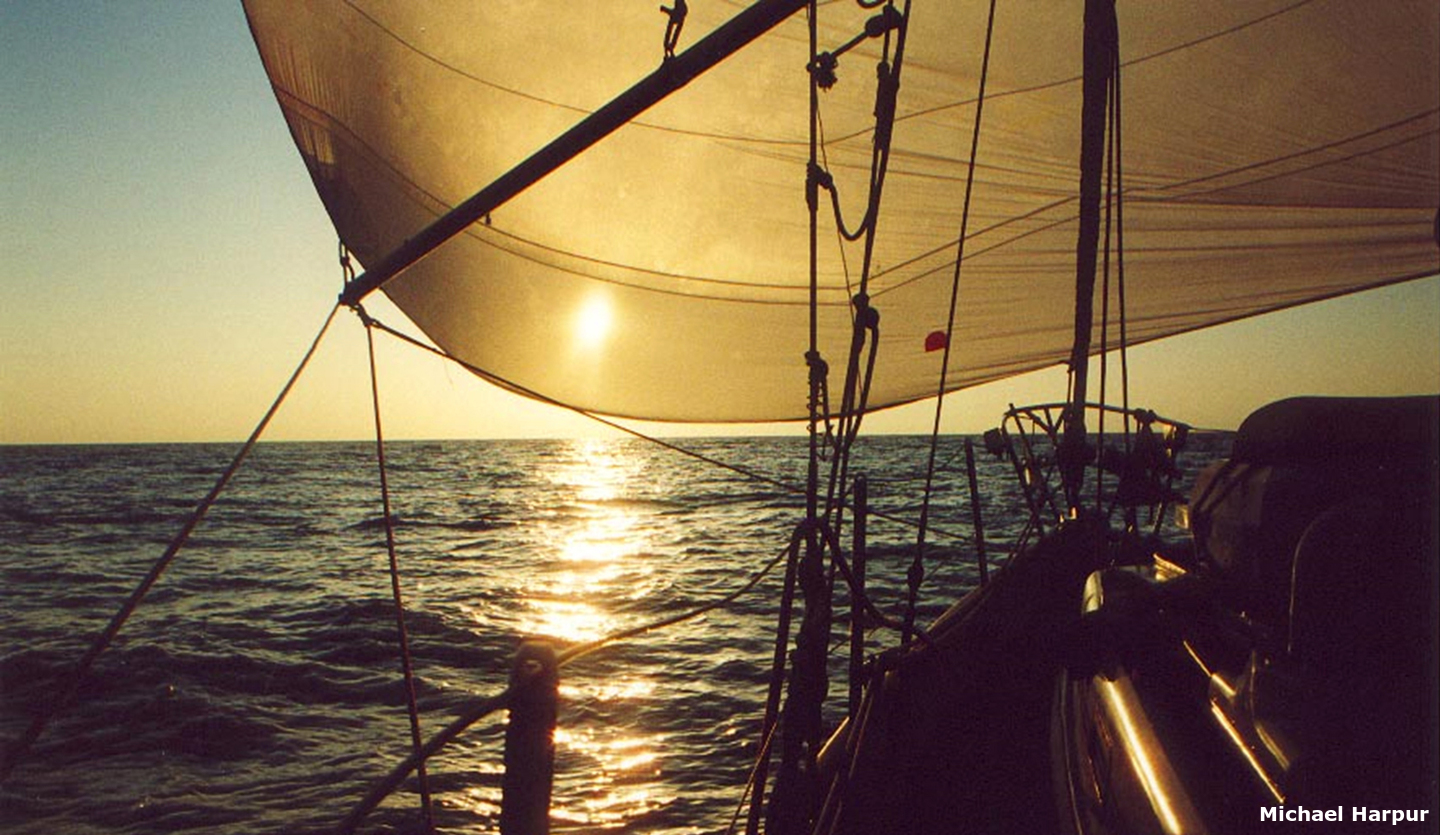 Tradewind sailing is synonymous with extended periods of down-wind sailing. In the traditional or un-modified sailing vessel's wardrobe, the sails of choice for this point-of-sail will be the spinnaker or the goose-wing sail arrangement.

Both of these sail arrangements are high maintenance set-ups that require constant vigilance and make reefing either impossible or highly complicated. This is far from ideal in a situation where boisterous conditions can quickly develop and, with the wind coming from astern, the boat will most likely be rolling, from gunwale to gunwale in some cases. These set-ups simply do not lend themselves to vessels with a small crew running downwind, day after day, for extended periods and are entirely inconsistent with a relaxed cruising experience.

Anyone preparing to do extended cruising will spend an enormous amount of time in the Tradewinds.
Working a spinnaker 24x7 for weeks on end is just not feasible. Goose-winging with a poled-out jib and a main secured by a preventer is somewhat better but not much, and it forces a vessel to round up to put a reef in which is a simply torturous procedure.

Likewise running before the trades is not as straightforward as you might be lead to think. The 15 to 18 knots of warm breeze over the transom accompanied by blue skies, fluffy white clouds and long gentle ocean swell, which is the picture postcard version of Tradewind sailing, can vary dramatically from the reality. Some years the trades blow 25 to 30 knots and churn up massive waves, while at other times they die out for weeks at a time. Changes also occur with dramatic rapidity when line squalls bowl in astern as often as not accompanied by heavy rain and strong winds. In reality, a deep ocean Tradewind passage will most likely experience all of these conditions at one time or another.

So you have to prepare a special Tradewind set up, that is easy to fly, easy to reef, largely looks after itself and can handle all eventualities. Get this right and Tradewind sailing will be easily managed.

Use a modified rig set-up to optimise the yacht for down-wind Tradewind sailing. Life will be more agreeable with a boat that is set up with a twin headsail Tradewind rig and associated supporting spinnaker gear as set out below. 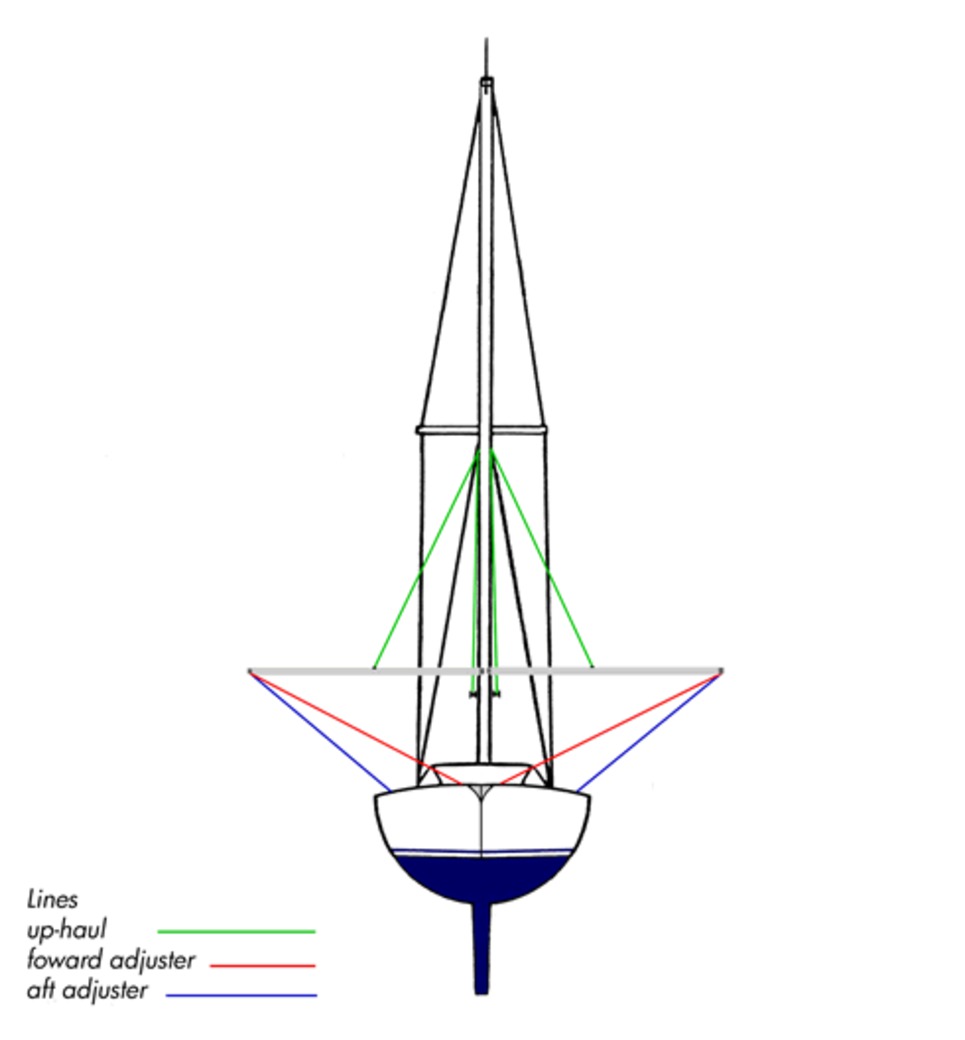 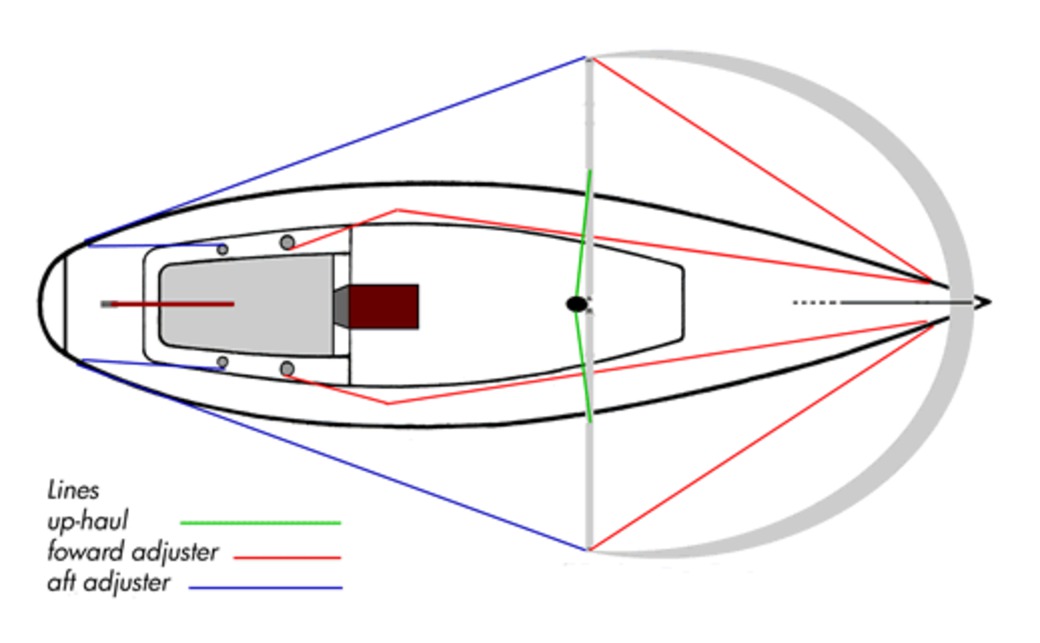 Tradewind optimised sailing rig plan
Image: Michael Harpur
In use, we typically got the rig set-up just before departing. We simply left the spinnaker poles high on their slides, heads down on the deck forming an inverted 'V' formation. Then, when we were clear of the shore we would put the sheets through the fittings on the end of the poles and host them out into their final configuration as presented in the diagrams and tighten everything down. We often sailed like this, on one sail, waiting for the wind to come round astern so that we could hoist the second sail. The rig just sits in place and needs no attention once set up. 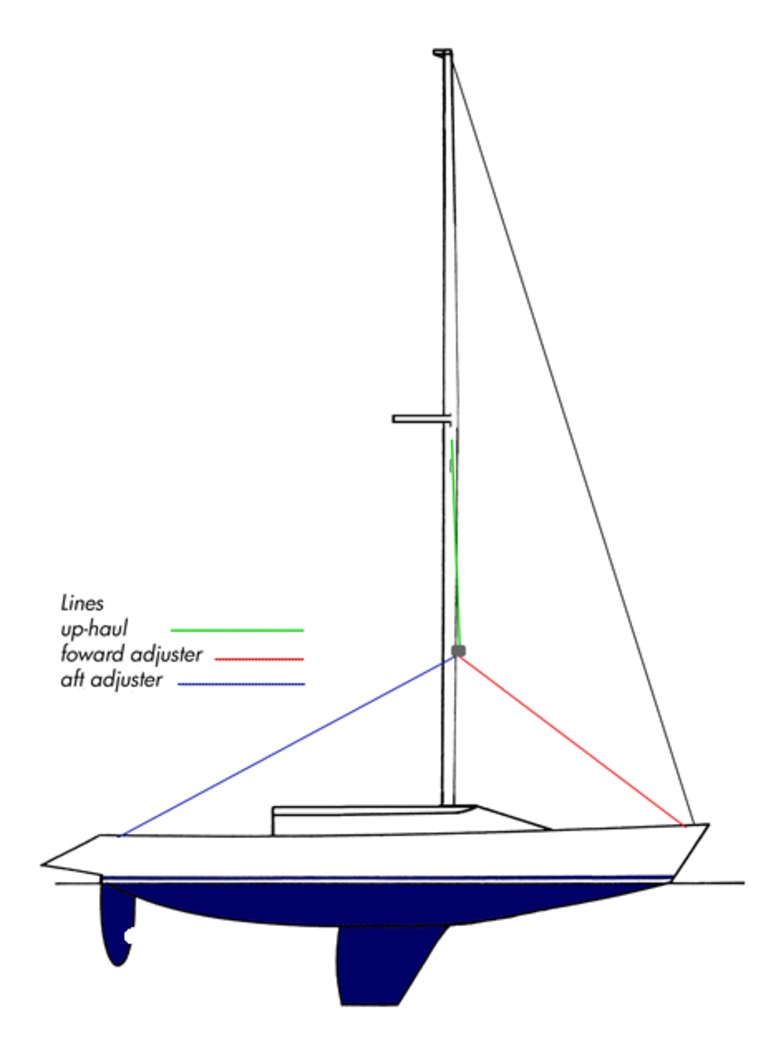 Tradewind optimised sailing rig side view
Photo: Michael Harpur
When it came to raising the second sail we dropped the genny and then hoisted it again with our second sail alongside it in the second luff in the foil. It can be a bit stiff raising up both sails at the same time and the luff groove should be positioned to be facing forward when pulling them up . Otherwise, with the groove facing aft, the wind blows the sails around the foil adding a measure of friction that makes it very difficult to hoist both sails together. You will need someone to feed the two bulky sails into the foil and keep them running in smoothly. 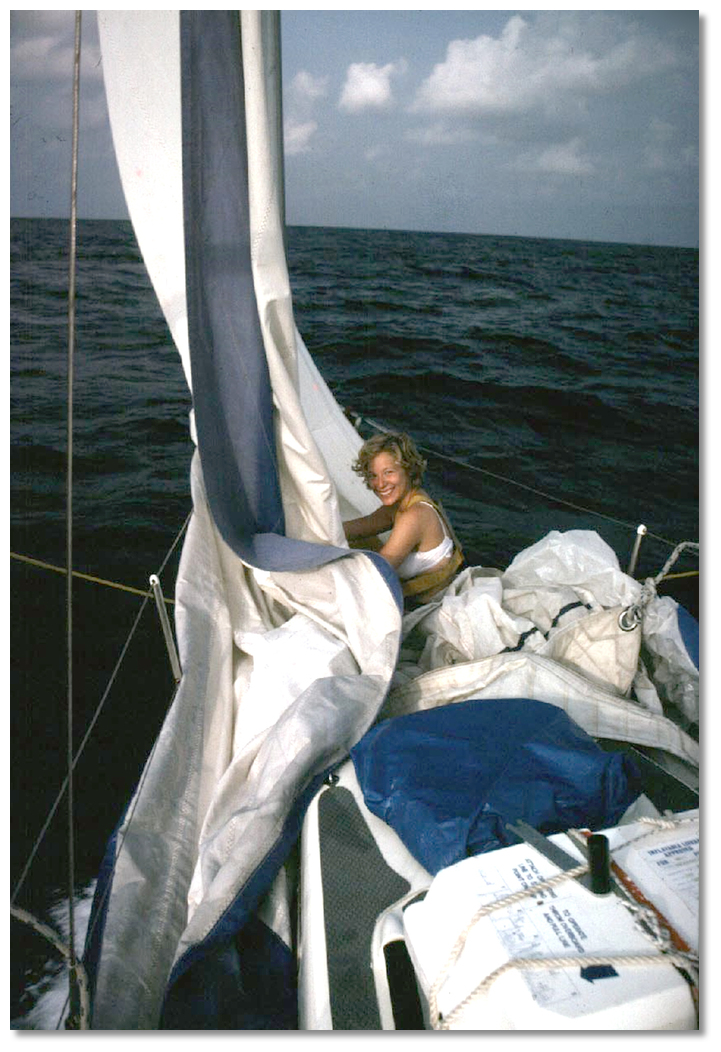 Feeding the sails into the twin-luff foil
Photo: Michael Harpur
We only had one halyard available so we had to hoist the two headsails at the same time. A better approach would be to be able to hoist the second sail independently so it can be raised and discarded as needed.

We easily managed to achieve a very large sail area via this approach, yet all the elements were fixed in place so that the sails were under complete control at all times. Once set up all the lines lead back to the cockpit so most sail management can be controlled by a solo sailor, often without leaving the safety of the cockpit. Once they were hoisted, the rig to the largest part took care of itself and the system is reasonably tolerant of wind shifts. 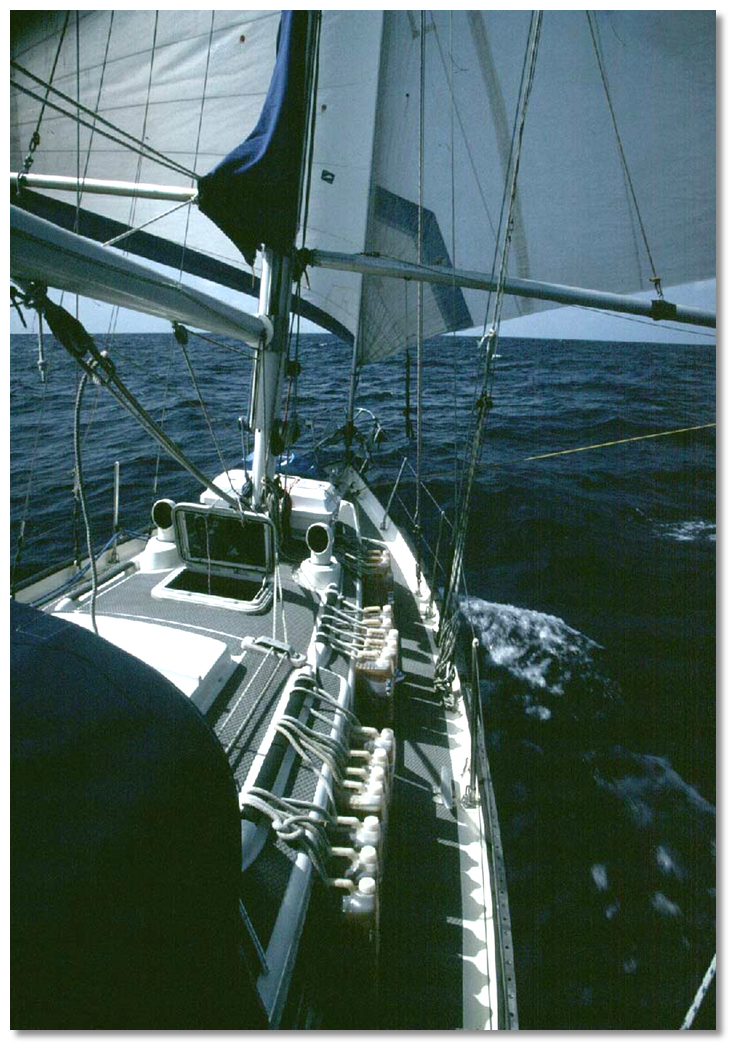 The best part of this system is that the sails can be easily and quickly reefed by the headsail furling system. If the wind developed or a squall came along all that was required for the two headsails was to slowly ease the sheets and furl the sails until the desired amount was still showing, or indeed entirely removed. When we experienced sudden squalls where the wind veered we found we could simply let the stalling sail go and it would lay flat on the working headsail until the wind shifted back when it could be reset by simply sheeting in again.

The same system can also be used to securely fly a spinnaker as shown at the top of the page in the header shot. Sadly, there is nothing that we found we could do to lessen the dreaded downwind roll. We hoisted the mainsail out to the full and sheeting it down flat tight on the centreline. All it did was slap and bang to the noise.

Michael Harpur, with thanks to Bernie and Sue McDonald, Yacht New Liver Bird.