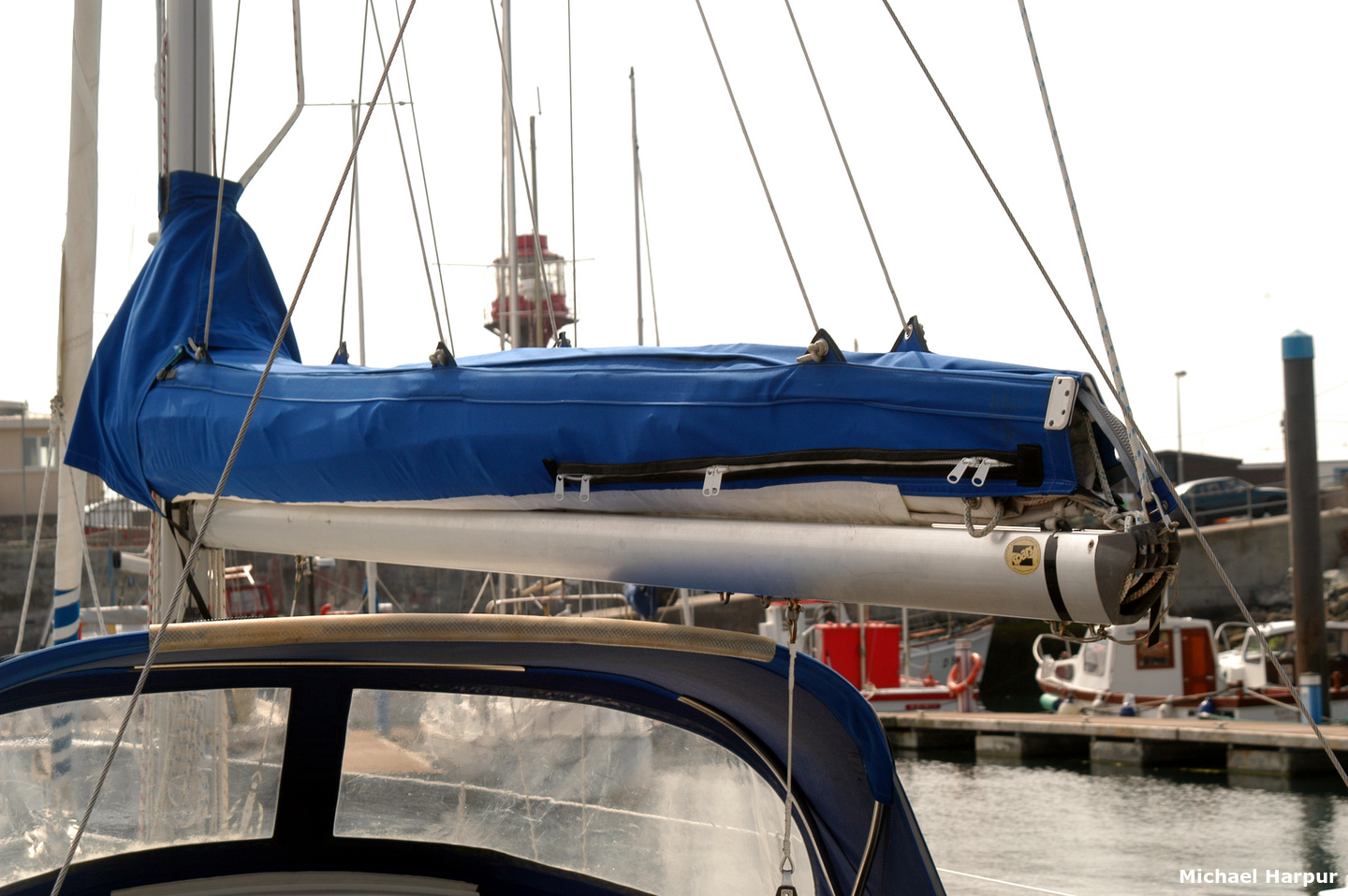 Furling a large mainsail, or even a reefing one, is a major daily sailing chore. Without an easy furling mechanism the sail drops down on deck and tends to blow all over the place. Gathering up, flaking and lashing it all, when it is sprawled all over a cabin top, is a heavy wearisome and often daily task aboard a boat. It is particularly difficult with a high-set boom, when the sail is being blown about on a slippery rolling deck and, as often as not, approaching a busy harbour. It can be an absolute pain to handle shorthanded and particularly singlehanded.

Because the mainsail can be such a burden to put to bed people tend to avoid using it for short sails, or reefed and un-reefed as frequently as they should. The effort tends to have the pernicious effect of dissuading people from putting in a timely reef when they should. Any simplification of this task will make the sailing life dramatically simpler and more pleasurable. Plus anything that makes implementing reefing easier will make a timely reef more likely.

Implement a furling solution that automatically controls the mainsail as it comes down. The best and most expensive are in-mast sail furling systems but these are hugely expensive and do cater for fully battened mainsails. The most popular and widely used system to add to an existing setup is the ‘lazy jack’ mainsail furling system, followed by the 'Dutchman system'. Both are dependable, non-mechanical sail-control systems that can be relied upon to make mainsail furling very easy.

LAZY JACK
Lazyjack furling has been with us since the ancient Chinese discovered it and is a well known and widely used automated furling approach in sailing today. The system is made up of a set of lines that come from the boom up either side of the sail to hold it on the boom when it is dropped. 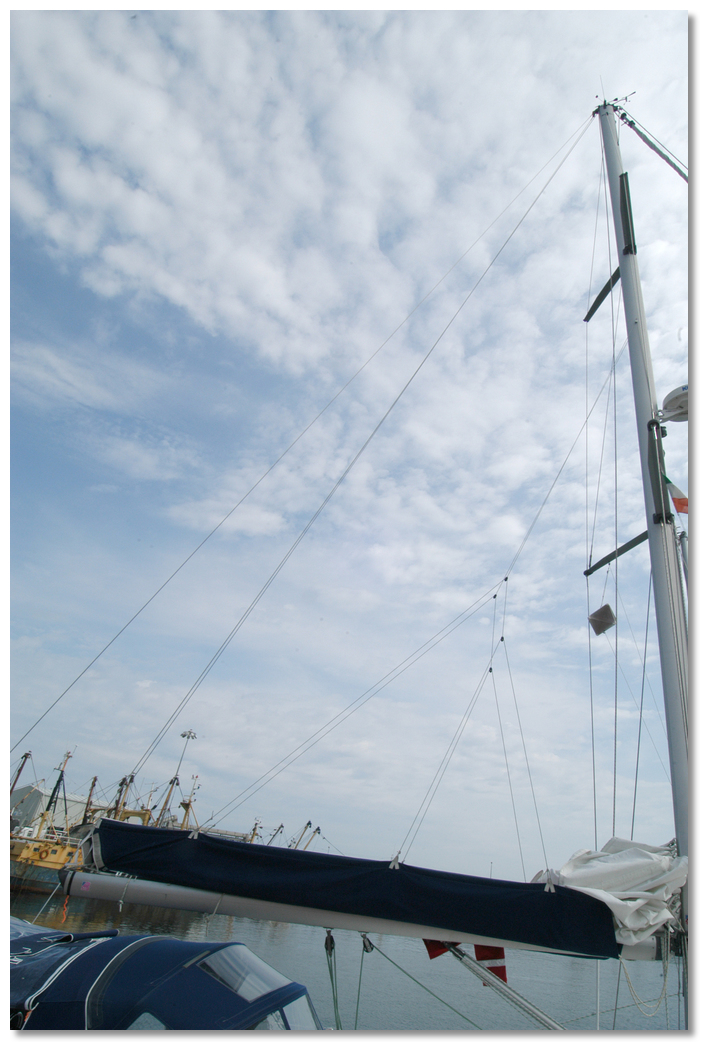 Lazy jack lines are fitted to both sides of the mainsail and running through a
well rounded and softened pair of eyelets
Photo: Michael Harpur

The lines are fitted to both sides of the mainsail, running from a point just above the masts mid-point through a well rounded and softened pair of eyelets that will not cause mainsail chafe. Control of the system is typically handled via a downhaul from a top line secured to a mast mounted jamming cleat.

Lazy Jacks are made complete when used with a specially integrated stacking pack zippered sail cover that can be used to further ease the furling process. The tailored permanent UV protective sail cover remains on the boom and should be large enough to let the sail fall into the cover naturally, with a little straightening up, and then it closes over the sail by pulling a zipper along the top. All you should have to do is just drop in the main and zip up the pack, and the job is complete. 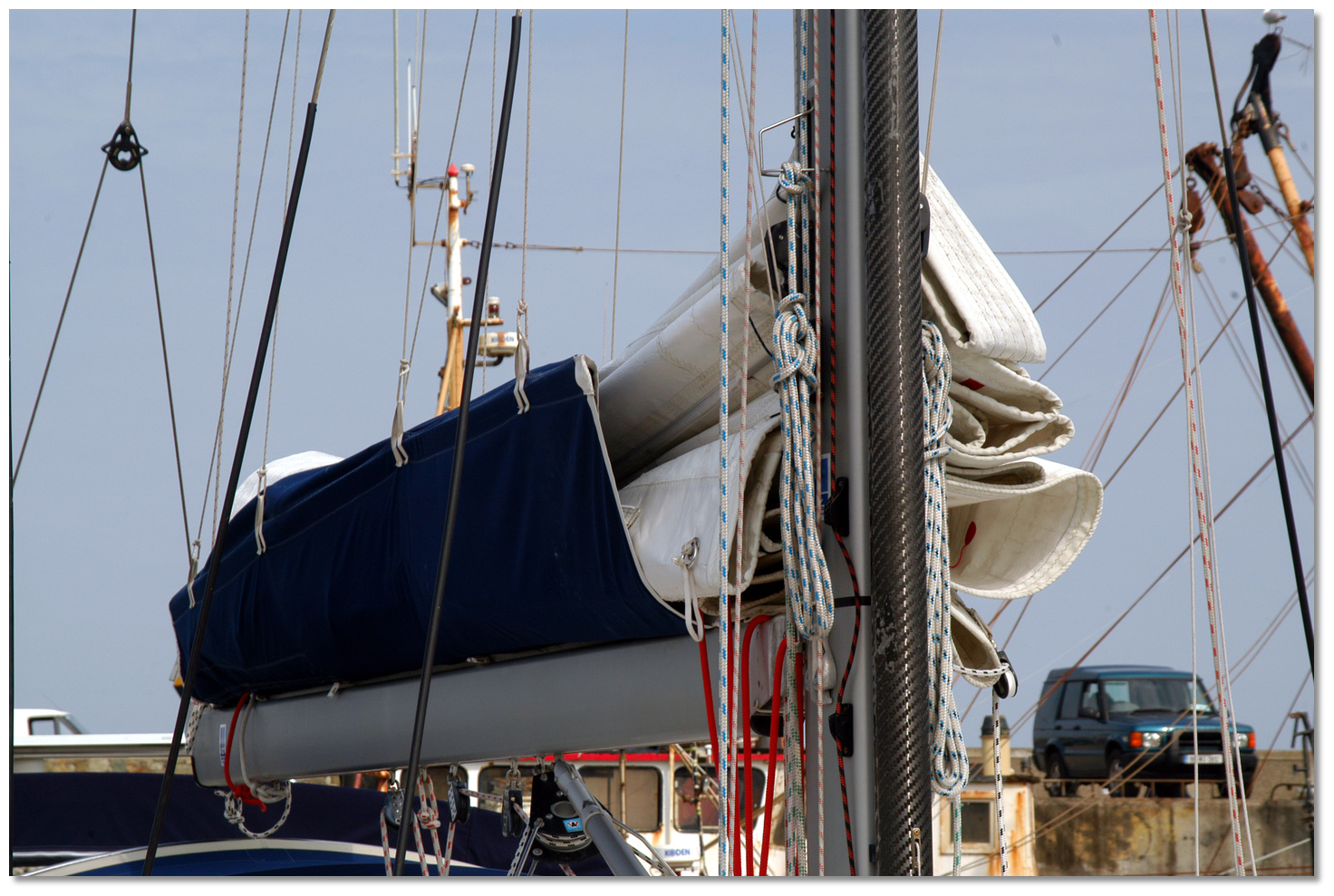 Lazy Jack stack bag allows the sail to naturally fall into it and be zipped up
Photo: Michael Harpur

The few extra light rigging lines involved are well worth accepting for the convenience Lazy Jacks offer when it comes to furling the main and having it neatly stowed. The only downsides are that the main's leech, and particularly its battens, can get caught up in the lazy jack lines as you raise and lower the sail. This is particularly the case in a sloppy sea and it is increasingly an issue as sails become stiffer. To avoid this, the helm must keep the vessel precisely head-to-wind and carefully monitor the process. Lazy Jacks also tend to put creases in the sails and can cause some chafe, shortening their lifespan.

They can also catch in the spreaders when gybing and the outhaul may also be less effective when used with lazy jacks. Harken, however, has a tip that helps prevent the sail snaring the lazy jacks. It involves running a length of shock cord from the lazy jacks, about a third of the way down on each side, to the outer tip of the spreaders. You then tension the cord to hold the top upper slot of the 'jacks' wide open which stops it getting caught around spreaders when gybing.

DUTCHMAN SYSTEM
The other alternate approach is the Dutchman Sail Flaking System. A series of grommets are mounted into the sail every 2 to 3 feet and they are laced with vertical control lines that lead upward through the sail. The lines are attached to the topping lift passing down to the base of the sail and they remain fixed in place.

When it is time to douse the mainsail it slides down on the lines like a Roman window shade. As the sail drops, the lines guide the main down to alternate sides of the boom both dousing and flaking the sail at the same time. There’s no need to head into the wind to raise, lower, or reef the sail as with lazy jacks, just let the sail luff. In emergency situations, you can almost 'drop it and forget it. Once installed, maintenance is not too significant and you can replace the monofilament yourself. 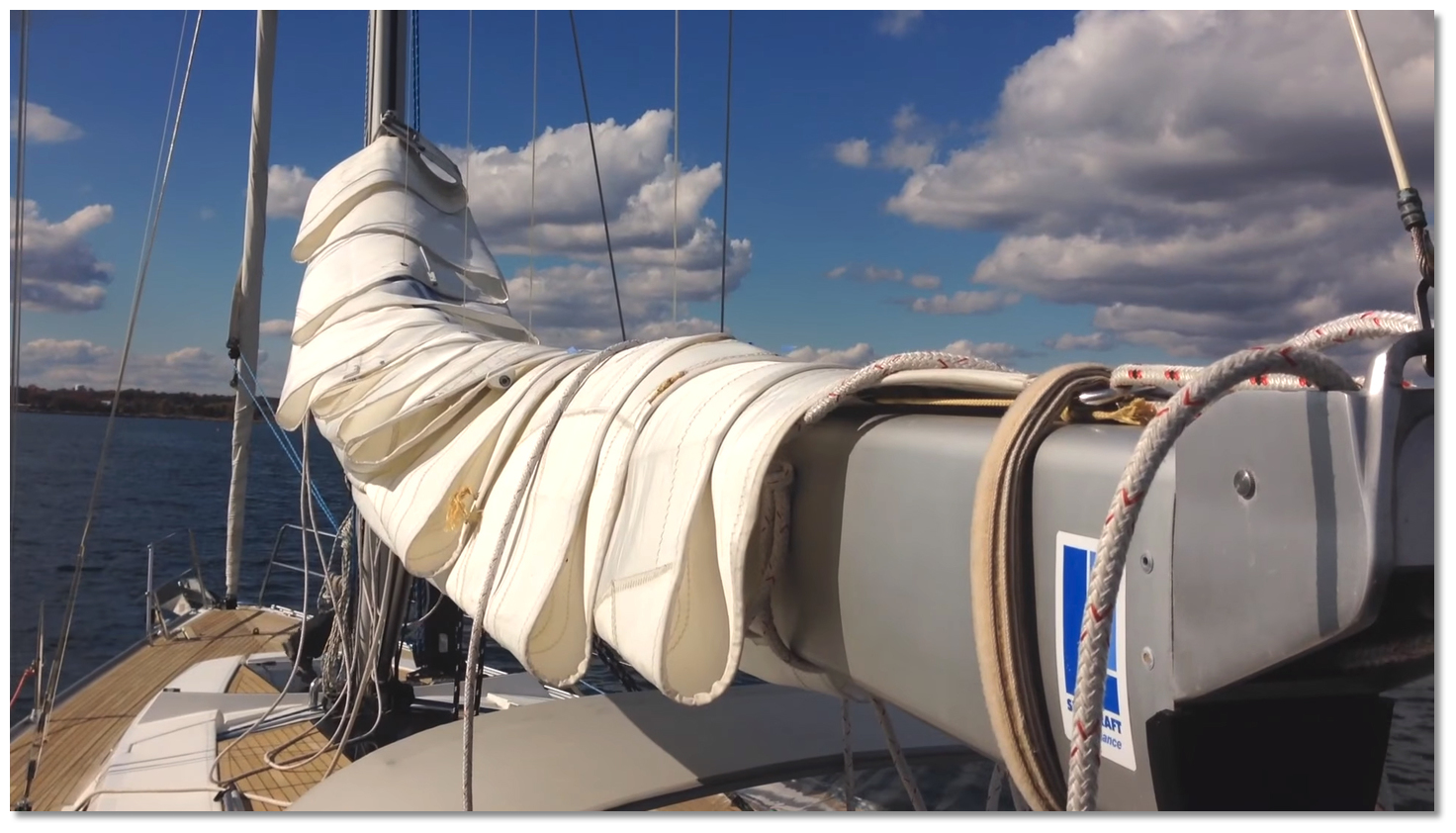 When set up correctly the Dutchman system is thought to be both easier to use and gentler on sailcloth than lazyjacks. Unfortunately this system is much more expensive than the lazyjack system because you have to purchase the system itself, modify the mainsail and modify the sail cover, and you will need a dedicated halyard for a topping lift. Unlike the simpler lazy jacks, that can be ordered and self-installed, or even homemade, the Dutchman should be installed by a sailmaker because only perfect alignment will assure proper operation. So in order to make the most of the investment it would be best done when renewing the mainsail, or if the mainsail is well worn the lazyjack system would make more sense.

ALMOST ZERO COST OPTION
If however, you want to improvise a solution for almost zero cost have a look at the easy low-cost system to store the mainsail

suggestion. This uses a shackle and a 30 cm of strong string to create a lower loop of the sail which acts almost like a bag for the rest of the sail to fall into.


Reefing with a Dutchman System


How to Make a Sail Pack for Your Boat