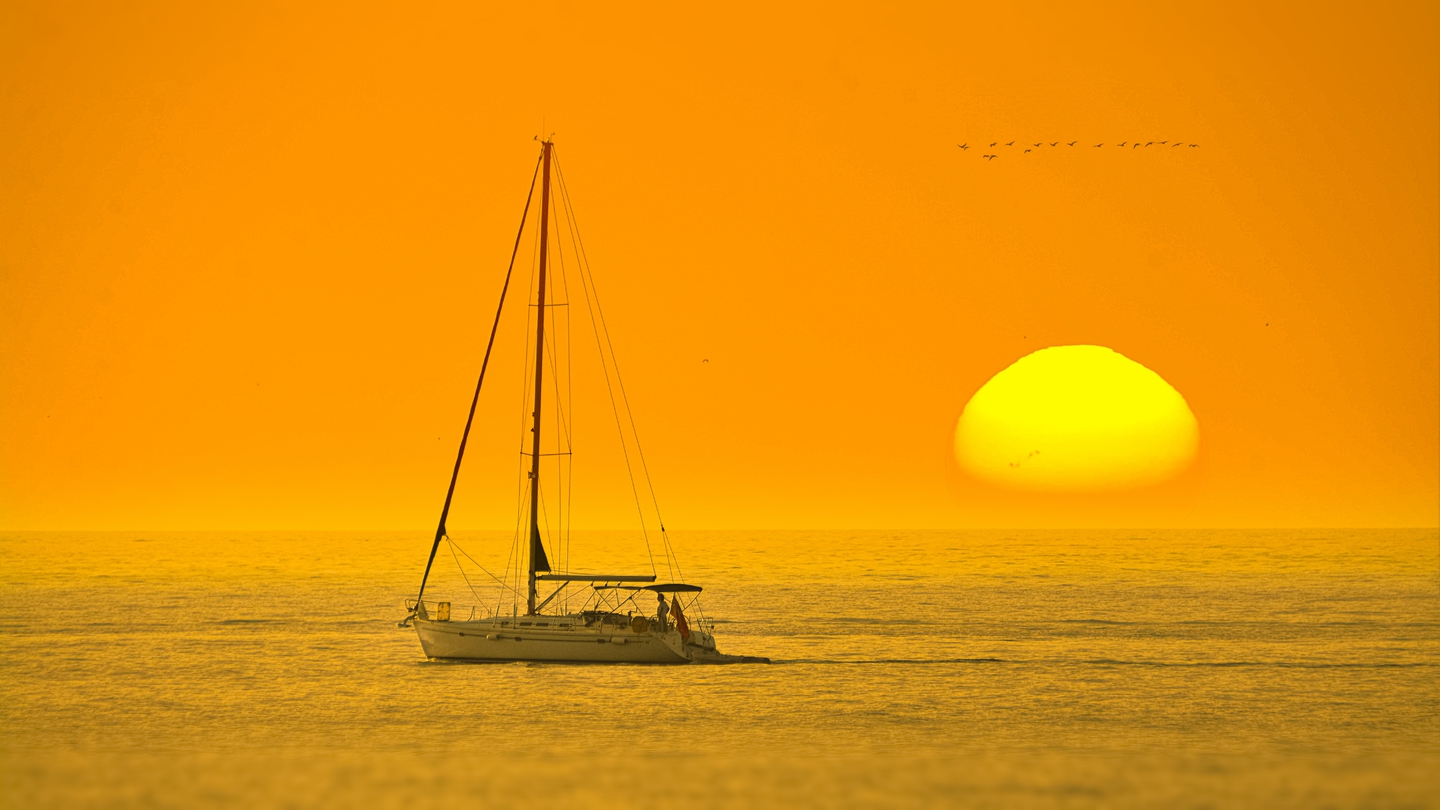 Minimising fuel consumption and maximise range whilst operating under power

Fuel is an expensive resource and a range limiting factor during long passages.

Reducing fuel consumption delivers dramatic fuel savings, is easier on the engine, extends the cruising range of the vessel and reduces pollution. When crossing equatorial regions, where calms and light unpredictable winds are common, it is absolutely essential to make the most of fuel reserves or a vessel may be sat waiting for winds for days on end for the means to escape.

This is, however, a general rule-of-thumb. In practice, the optimum combination of power to conditions is actually a surprisingly complex equation that applies to each individual vessel. Variables include waterline length with displacement hulls, weight, the Specific fuel consumption (SFC) curve of the engine, the propulsion efficiency curve of the propeller type, hull type etc. Even factors such as the sea state and load position all play a part. So there can be no absolute and fixed rule and calculating the precise optimum for each vessel is an exceedingly complex task. But for a seagoing passagemaker who prefers to concentrate on the task at hand, namely getting to the destination and without breaking the bank, the ⅔ of the rule offers a very good guideline. 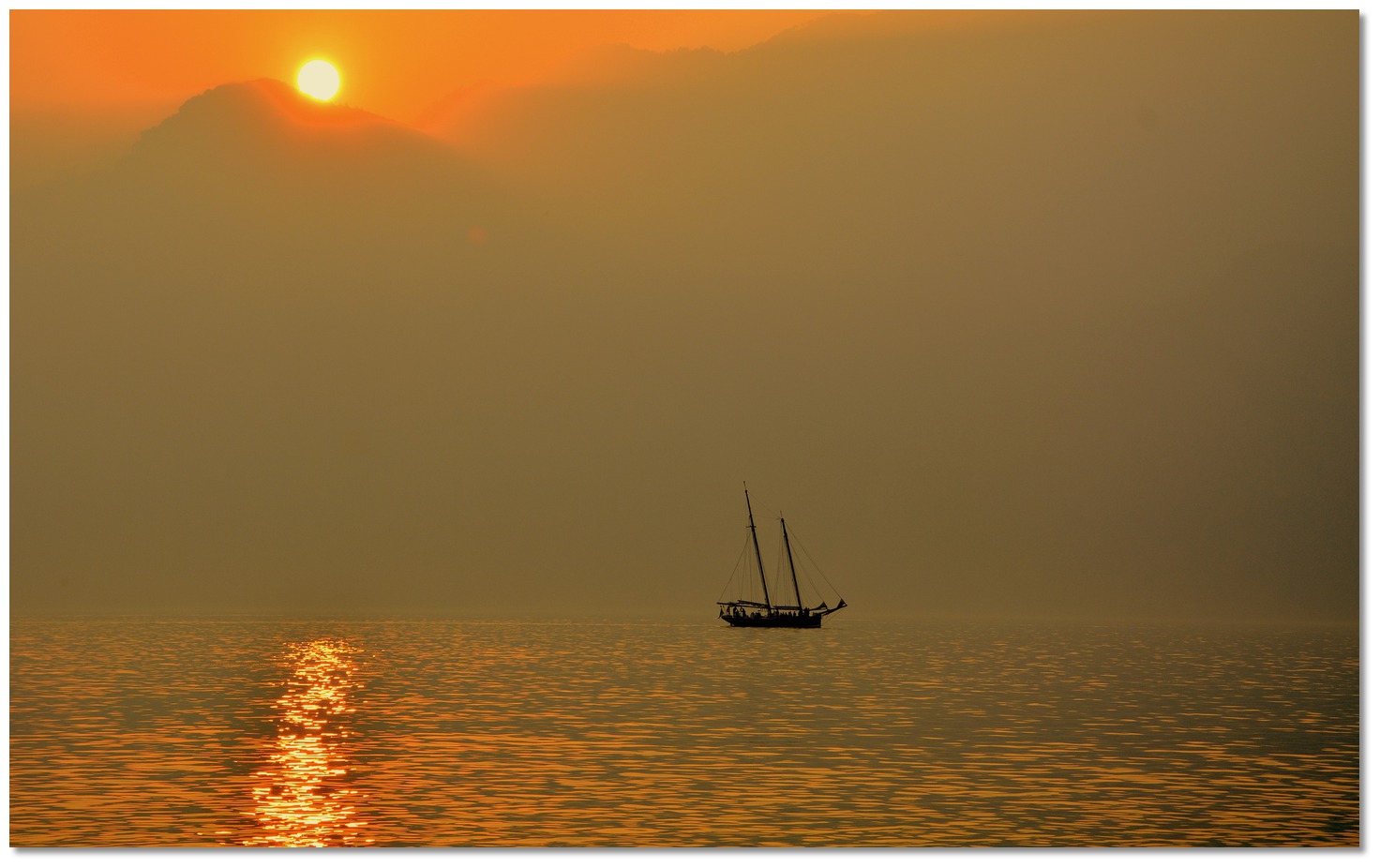 In the doldrums it is essential to make the absolute most of fuel reserves
Photo: CC0

DISPLACEMENT SAILBOATS
For displacement boats, such as yacht motoring on an auxiliary engine, the hull speed is the key fuel efficient sweet spot variable. Hull speed can be expressed as a simple mathematical formula 1.34 X the square root of the length of the waterline (HS = 1.34 x √LWL). For instance, if a cruising sailboat has a waterline length of 36 feet, she should be able to sail 1.34 x 6, or approximately eight knots.

In practice, hull speed is achieved when the bow and stern waves interfere constructively, creating relatively large waves, and thus a relatively large value of wave drag that defines the fastest efficient speed of a displacement vessel - see 'the three magic numbers for optimum sailing comfort and efficiency

The key point to note about the equation is that the drag increases smoothly and at an increasing rate up to hull speed which makes the boat significantly less energy efficient at the higher speeds. This is because much more of the power goes into pushing the big bow wave and dragging a huge stern wave astern, technically known as 'wave-making resistance', at the higher speeds. Likewise, because of this non-linear or exponential increasing drag, every fraction of a knot approaching hull speed disproportionately burns larger amounts of fuel. Hence even modest increases in speed produce sharp increases in fuel burn rates. If however, you simply aim for the ⅔ of hull speed you are most likely to be in the optimal distance to fuel consumption available, or in its immediate orbit.

A specific example of this can be taken from our vessel Obsession in which we circumnavigated. This was a traditional 38ft displacement yacht with extensive overhangs that presented a 25ft waterline driving a theoretical 6.5 Knots waterline speed. Modern diesel engines find their sweet spot somewhere around 1,800 rpm but the overall boat 'sweet spot' will be much more driven by the waterline. Becalmed and in absolute flat conditions for ten days we focused on maximising our range and found the sweet spot to be 3.8 - 4 Knots or just a shade less than ⅔ of boat speed. In terms of ‘diesel revolutions per minute,’ this was at an extraordinarily low 1,400 rpm on a 40 horsepower diesel engine.

This only works for diesel engines as they are very good at operating at lower speeds. They can retain the same fuel efficiency at part load and their burn rate drops quickly when running at these levels. This is not the case with a petrol engine where efficiency drops sharply when the throttle is reduced because of their lower compression rate related to the reduced amount of intake air. Petrol engines also rev higher and you can expect optimal fuel consumption to be somewhere between 3,500 – 4,500 rpm for outboards and 2,500 - 3,500 for inboards.

A good guideline for budgeting fuel consumption for normally aspirated diesel engines on a displacement vessel is 1 ltr/hr at peak torque for every 10hp. For our old trusty 40 hp BUKH exhibitions that would make 4ltr/hr.

POWER BOATS
Moderating your powered passages the ⅔ rule still applies with powerboats but this ‘rule-of-thumb’ represents a fraction of full power. However, it is not so straightforward with planing power boats as there are more variables involved.

The shape of the hull and the vessels speed is a major factor with regard to fuel consumption and the size of the engine. The boat may not have a big engine as many believe that they should buy a smaller engine to save fuel which is true only up to a point. But one of the least efficient things you can do is underpower a boat. A smaller engine will have to work much harder to get the same results, and pushing higher RPMs will eat into the mpg gains that might be there on paper. Worse, a small engine may not be man enough to deal with a seaway the would endanger a vessel and its crew.

What is easier with powerboats is acquiring data points regarding fuel consumption. Fuel efficiency research by OCQUETEAU

show the following fuel burn rates when powerboats are run at maximum power or speed:

The key point OCQUETEAU also observed was easing back 'the cruise speed' to a more economical ⅔ of maximum speed, immediately halved the fuel burn rate, both for petrol and diesel engines. 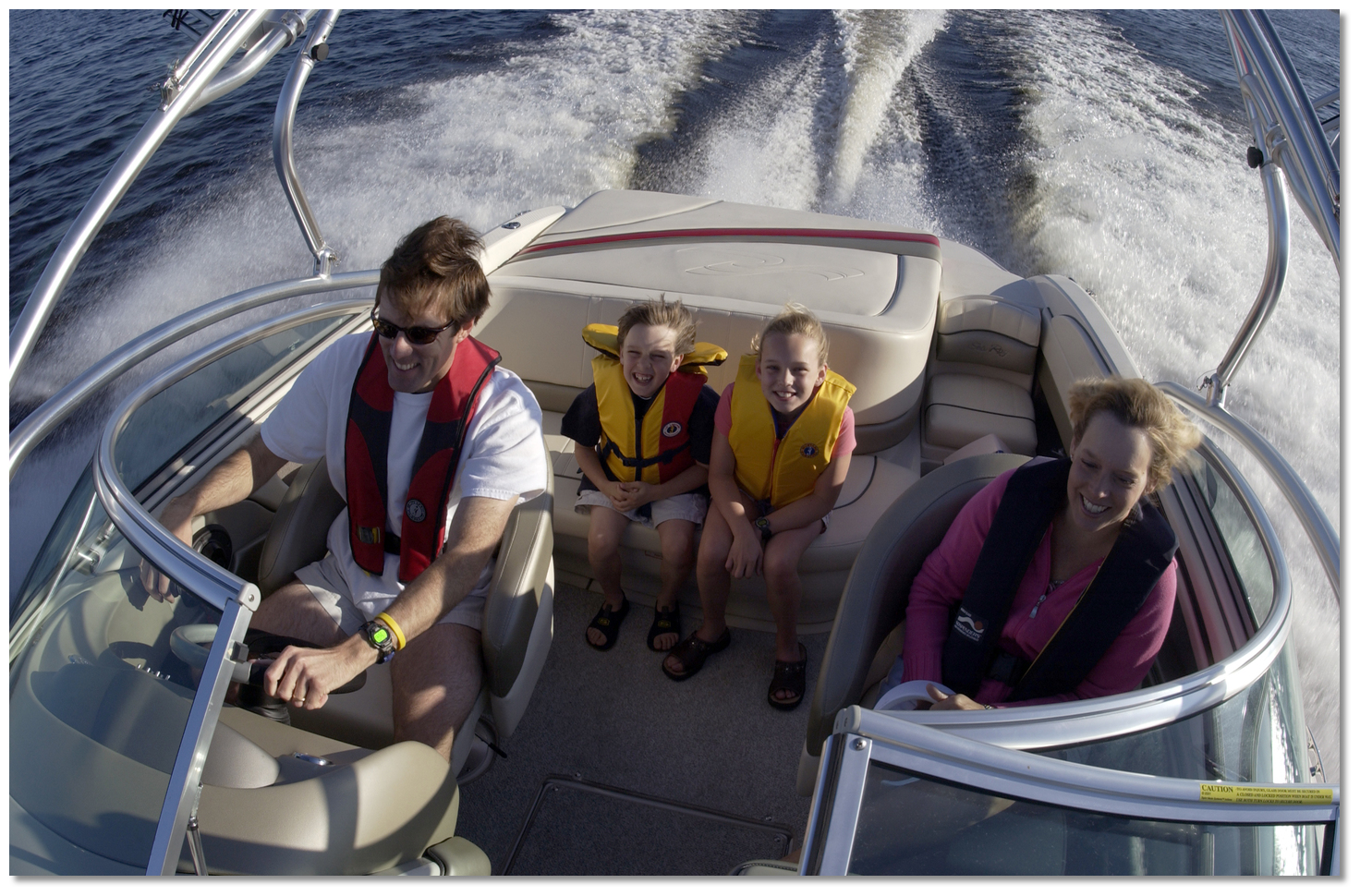 A boat climbing onto a plane is something felt
Photo: U.S. Coast Guard

But on the water, the most important factor is to ‘plane-off’ before turning back the power. Otherwise, the vessel is termed to be sitting in ‘the hole’ before planing. This is both excessively fuel inefficient and also creates a very large wash for other vessels. Most engines settle into the optimal fuel point shortly after the boat climbs onto a plane. Once planing speed is reached, trim the engine up slightly until you can feel it lock in, almost humming with machine happiness. It’s typically at ⅔ of full power but this is more of a feel thing but there are defined parameters in which to work.

research clearly presents the benefits of turbo-diesel engines. They may be more expensive to purchase but they represent a reduction in consumption of about 40% of fuel, versus like-for-like-petrol engines, increasing the range and or reducing weight. More detailed powerboat information can be had by reading the Saving Fuel on Your Recreational or Charter Boat

that may be downloaded as a PDF.

CONCLUSION
So if you want to save fuel kick back the throttle and take it steady. The ⅔ of hull speed/max power according to your vessel provides a simple target to aim for when it comes to optimising fuel consumption/distance. It is a simple way to dramatically reduce fuel costs, extend engine range and the longevity of the vessel's engine service.

If you have a modern boat and want to fine-tune the rule, you may find that your engine is NMEA 2000 compatible which could provide the data you need. NMEA 2000 is a combined electrical and data specification that allows communication between all electronic devices such as depth sounders, chart plotters, navigation instruments, engines, tank-level sensors and GPS receivers. NMEA-capable engines can output revs, temperature, oil pressure, tilt level and fuel usage from an inboard or outboard engine and display it. Data output and presentation varies widely between manufacturers. It may be displayed as a raw feed, providing the data from which to work from, or, at its most comprehensive, the instrumentation will make adjustment suggestions to provide you exactly what you need automatically.

Finally, don't forget keeping your engine in good condition will also help. Poorly functioning injectors, a lack of clean air, dirty oil, or a turbo that isn’t spinning freely will all add to fuel consumption. Keeping the hull and prop clean will go a long way to reducing drag and increasing your SOG.