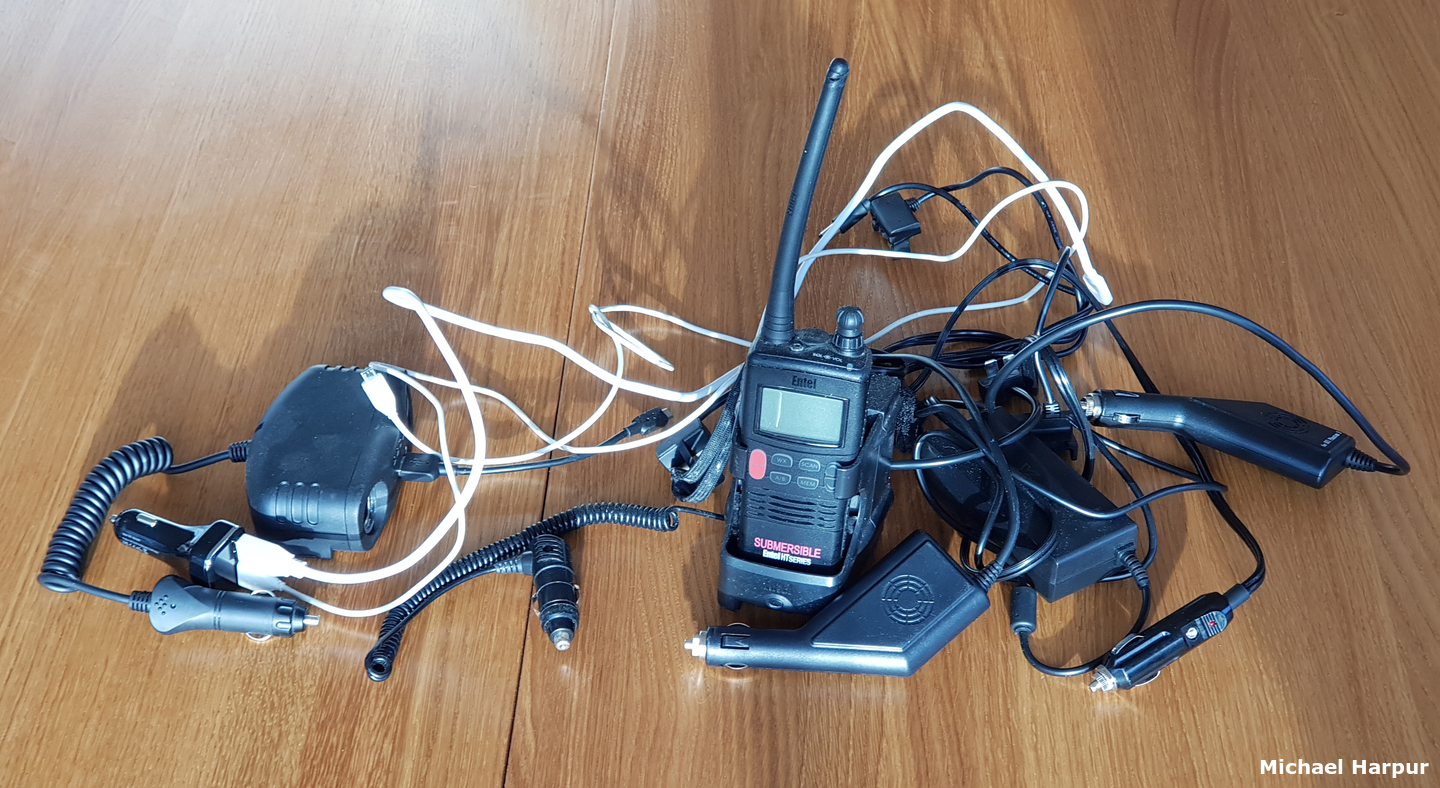 Powering and charging occasional AC devices aboard a yacht

Yachts typically operate on 12 volt DC systems whereas most household electrical products run on 240 volts in the UK or 110/120 volts AC in the US. This means that it is not possible to charge the occasional personal user devices such as smart-phones, iPads, digital cameras, laptop computers, camcorders, portable video game consoles, stereos etc directly from the standard power supply.

Modern living has left very few of us, or our friends and guests, unattached to some modern gadget or device. Acquiring individual DC chargers for each and every unit that comes aboard would be both expensive and impractical.

Invest in a 12 volt DC to 230 volt AC Mains Inverter so that all the devices may be charged by their domestic chargers. 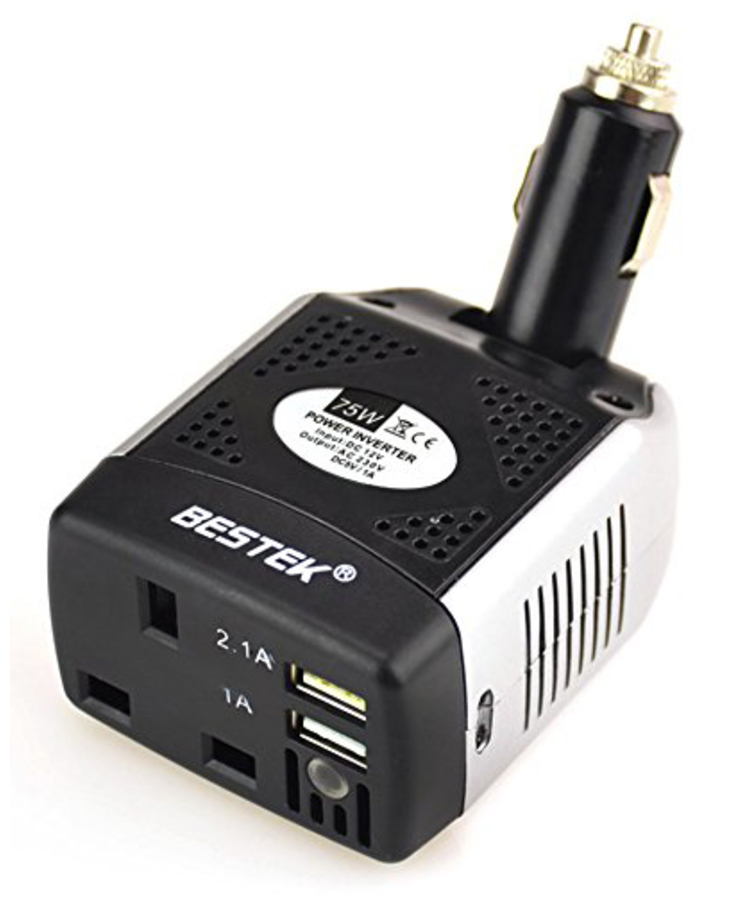 A small single outlet 75 watts inverter
Photo: Courtesy of BESTEK
An inverter is basically a device that converts electrical energy of a DC form into that of AC. The purpose of DC-AC inverter is to take DC power from a battery source and converts it to AC. The inverter takes the 12-volt DC power coming from the boat batteries and converts it into 240V AC with a desirable frequency of 50Hz or 60Hz.

Inverters come in three types, simple small to medium portable devices that can plug in ad hoc to cigar outlets, larger units that connect directly to the battery bank, and large-scale boat wide electrical solutions. We are focusing on the first two, portable inverters and directly attached devices focused on making it convenient for personal electrical goods to be powered - for broader electrical discussions see power generation on a sailing yacht

. The type of inverters that do not need an electrician to set up, are easy to deploy, relatively cheap and allow people to use domestic power supplies, chargers and plugs aboard. Getting this inverter right is a function of sizing it correctly and then buying the best product that meets the needs of the household and personal equipment brought aboard.

Inverters are measured by the maximum continuous wattage they can supply and most electrical devices state their power consumption in watts. So the first step is simply a matter of finding the consumption profiles of the range of typical appliances you will need to power and then choose an appropriate inverter. If a particular device is rated in amps, you can convert it to watts by the formula; amps x 120 = watts.

Below are indicative outlines of what you should expect to see as typical 'rated' or 'running' loads of a range of devices:

The above figures indicate the 'rated' or 'running' loads that the inverter caters for by its continuous output power. But there is also a phenomenon called a 'start-up' load that has to be contended with.

Start-up load, also known as inrush current, input surge current or switch-on surge, is the maximum, instantaneous input current drawn by an electrical device when first turned on. Some devices may not surge at all and others, for example, fridges and freezers, can surge up to 7 times above the rated power.

This makes it very difficult to make any allowances for that momentary burst of current. However, the easiest approach is to size the inverter so that it is well in excess of any device's required rated wattage. You can also accommodate the surge by checking the specifications carefully when selecting an inverter. Many accommodate peak surges that are several times larger than their continuous output power.

The surge wattage will be important to keep in mind while using several items at once. If you have a large serge appliance you will probably want to turn that one on first and then you can go ahead and start the other devices. 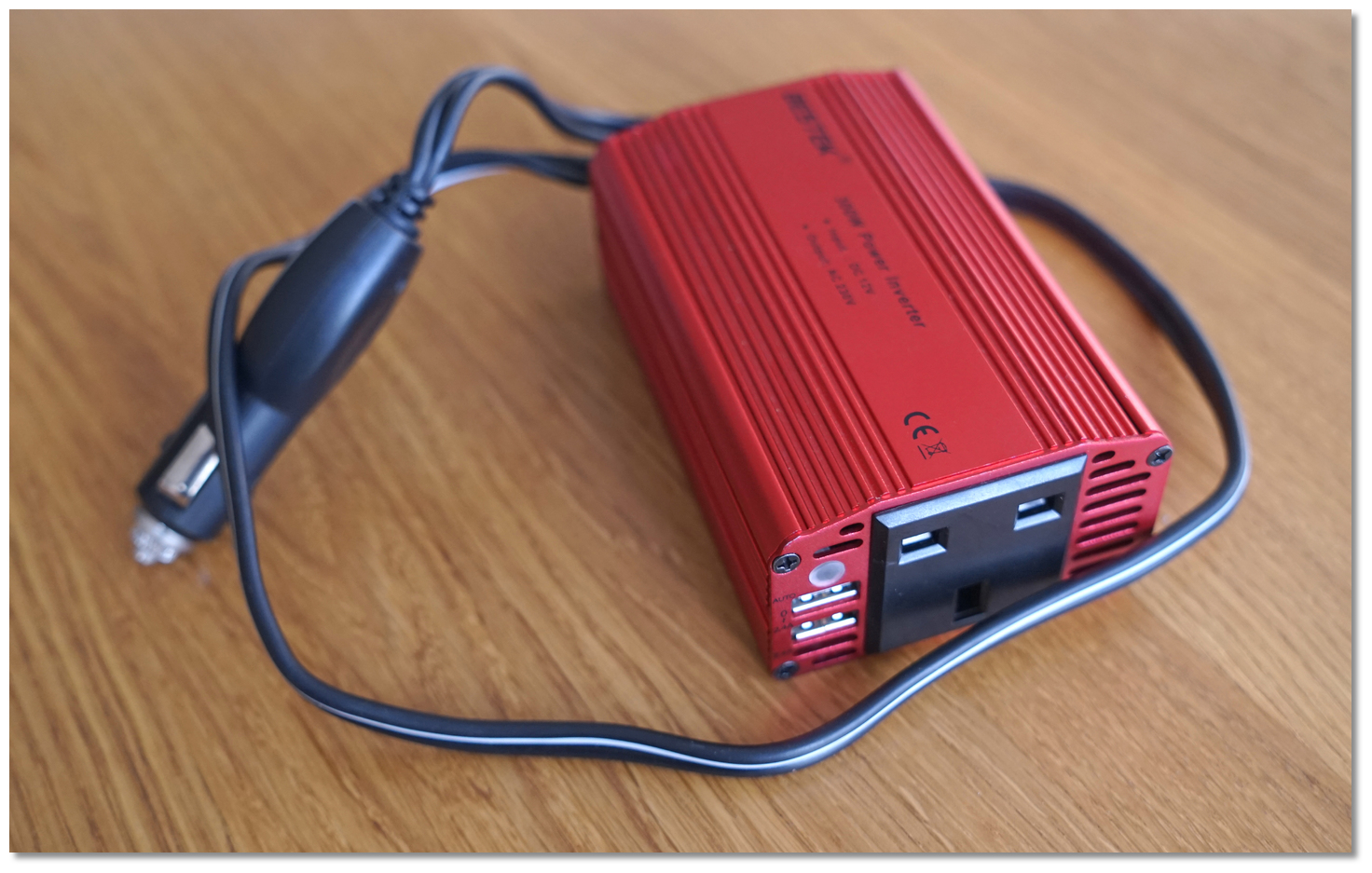 Once you know what your power needs are you can select the appropriate inverter. Portable cigar type plug-in inverters typically range in size from 75 watts to 200 watts (6.25 to 16.67 amps). The limiting factor for the cigar plug is most likely its rated output. You can easily find out the general capability by looking at the fuse that covers the outlet:


This is only an approximation because the above amps to watts are a direct calculation and you can expect small inverters to be in the order of 85% efficiency. So you are losing something approaching 20% of the power in the process of conversion.

For smaller voltage, under 300 watts, you can get an off the shelf cigarette lighter inverter. These single outlet inverters are simple devices, and are therefore relatively inexpensive. They provide one standard, three-pronged outlet to power a single electronic device. 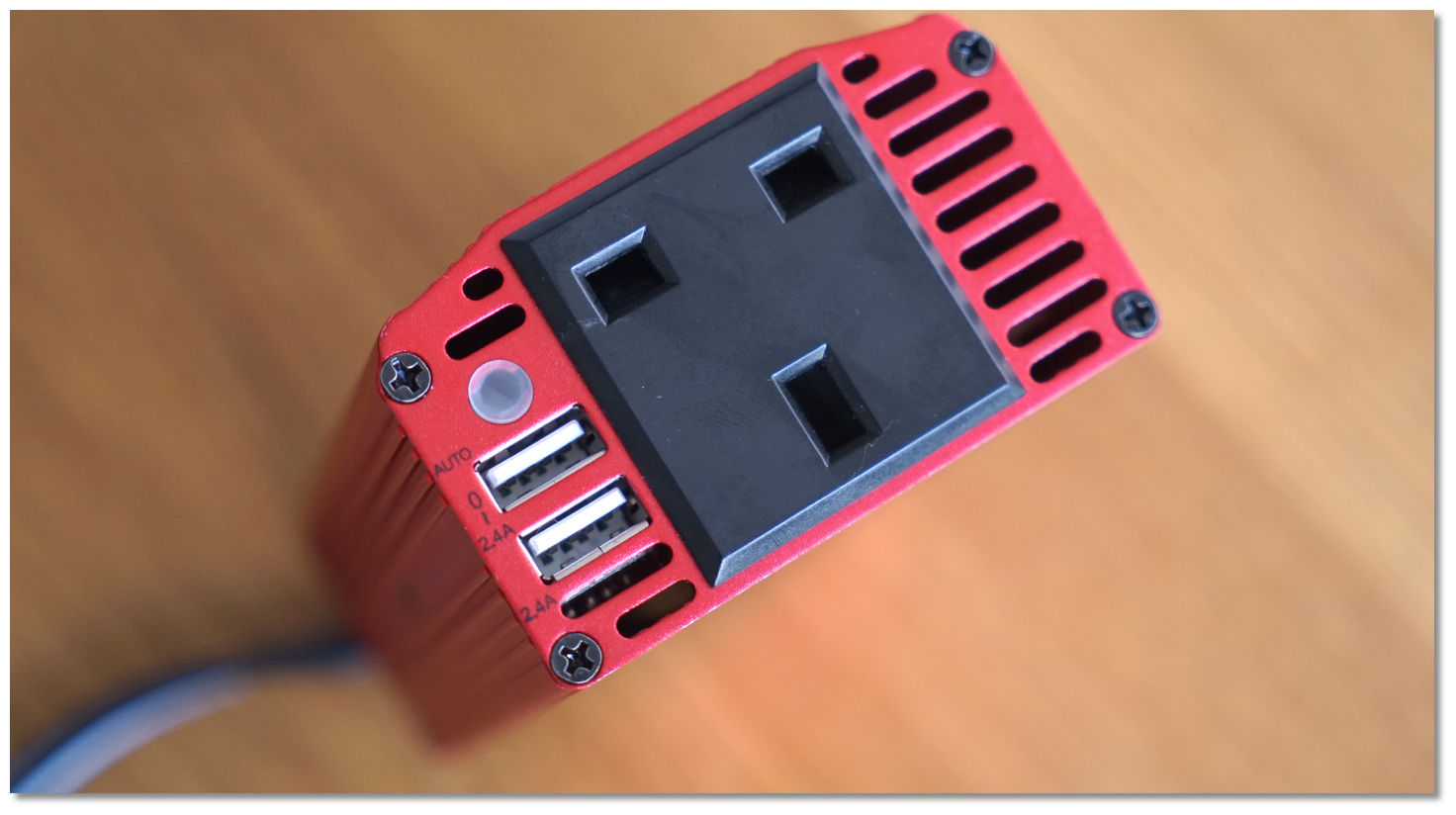 Many inverters, despite only having one outlet, still have a maximum continuous current capacity of between 150 and 300 Watts. They often come with USB ports as standard to allow users to charge devices like iPhones, Smart Phones, Tablet PCs, and other USB capable products.

However, anything larger than what is covered by the cigar lighters capabilities, typically inverters required to output 400 watts and more, have to be directly hard-wired into the boat’s battery bank. 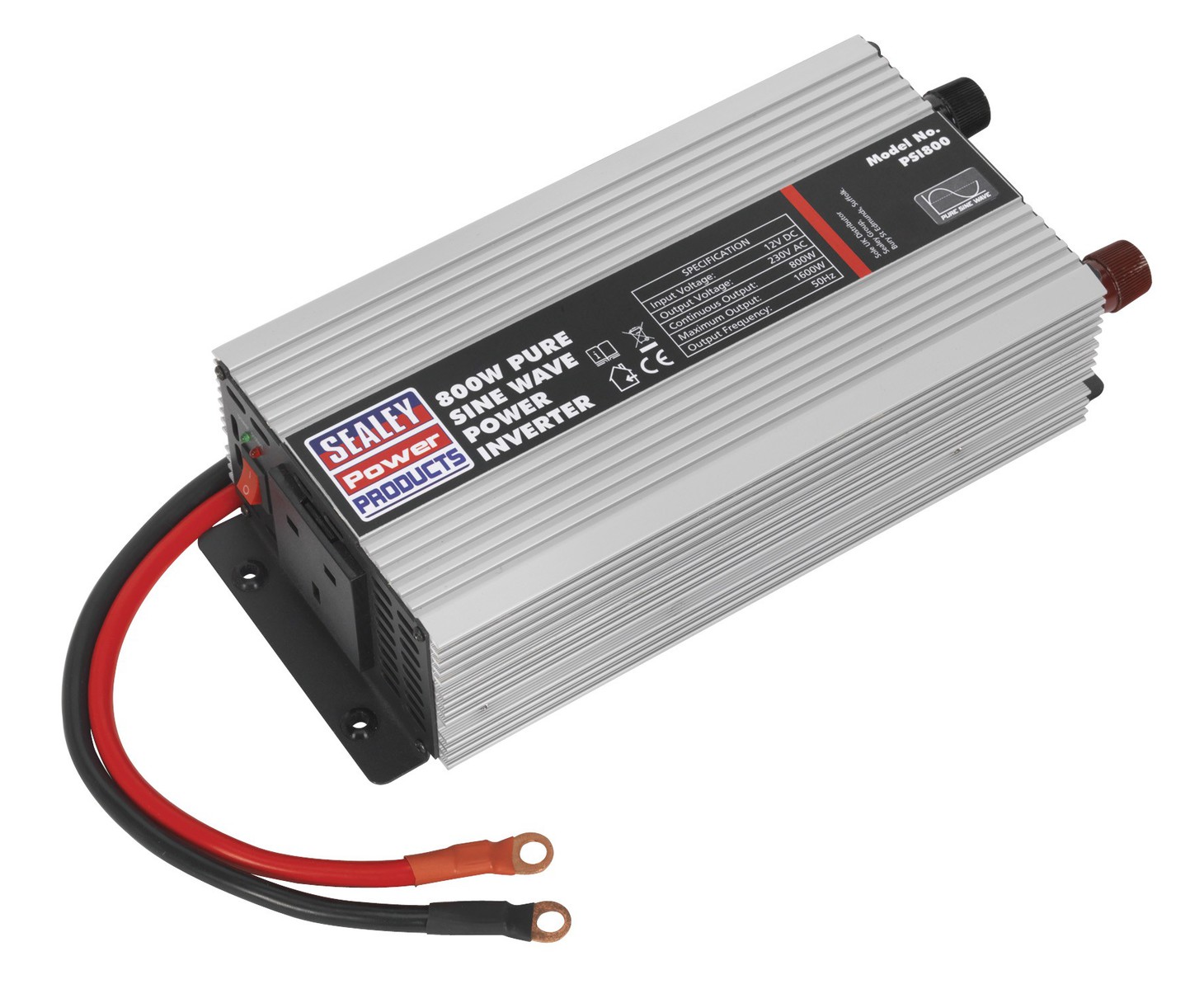 There are generally two types of inverters available for general purpose use Modified Square Wave Inverters and True Sine Wave Inverters. This aspect relates to the sine waveform of AC power.

AC current, by virtue of its nature, depicts a perfect sine wave. That is the AC current waveform shows a similar repetitive oscillation between a positive and a negative value of Voltage. Boat battery banks, however, are a constant DC voltage. When inverters first came out, the most common way to convert was to make the voltage go straight up and down, creating a blocky signal called a 'Square Wave Inverter'. This developed to have an extra step or so that created a waveform, more like a square wave, which brought about the Modified Square Wave Inverter. As time advance so did the Modified Square Wave take on multiple steps, trying to make the pulse-width-modulated steps in each cycle come closer to the sinusoidal output waveform.

It was this technology that most past inverters were made of and can be bought today for very little. A modified sine wave inverter will work fine with most equipment, although the efficiency or power will be reduced with some. Most household appliances work well Modified Square Wave Inverters but because it is noisier and rougher, some battery chargers, TVs and monitors and LEDs can have real problems with them.

Finally, at the turn of the century, a True Sine Wave Inverter was developed and are now widely available. True Sine Wave Inverters output AC power that has very little harmonic distortion resulting in a very clean supply that is indistinguishable, as far as AC equipment is concerned, from the grid. The output can be frequently cleaner than that from a power company and the peak voltage and waveform is unaffected by changes in battery voltage. The True Sine Wave Inverters are ideal for running electronic systems such as computers and other sensitive equipment without causing problems or noise. Mains battery chargers also run better on pure sine wave converters.

Be sure to check both the maximum continuous current capacity and for a maximum peak or surge current capacity. Inverters generate heat and some models automatically cut out once a certain internal temperature is reached. This stops the circuits in the inverter and the products being powered from burning out and causing extensive damage. This is, of course, a good thing but if you get an inverter with an internal fan, although they can be noisy, it will keep it running in hot environments. Some inverters also have various power saving capabilities so that they enter a low power mode when nothing is drawing off energy. High-end units can also drop the voltage to devices that do not need peak power in order to reduce the loss of energy.

It is a good idea to ask about overload shut off indicators or switches on your DC to AC inverter just in case you overload the inverter and one that switches off if the batteries are depleting. You will also want to check to find out if the inverter has thermal and short circuit shut down to prevent those types of emergencies also. Make certain that any USB ports power Apple devices; not all USB inputs can as Apple devices can request extra power. Apple peripheral devices might request more than 500 mA (Milliamps) at 5 V (Volts) from a port to function or to allow for faster charging.