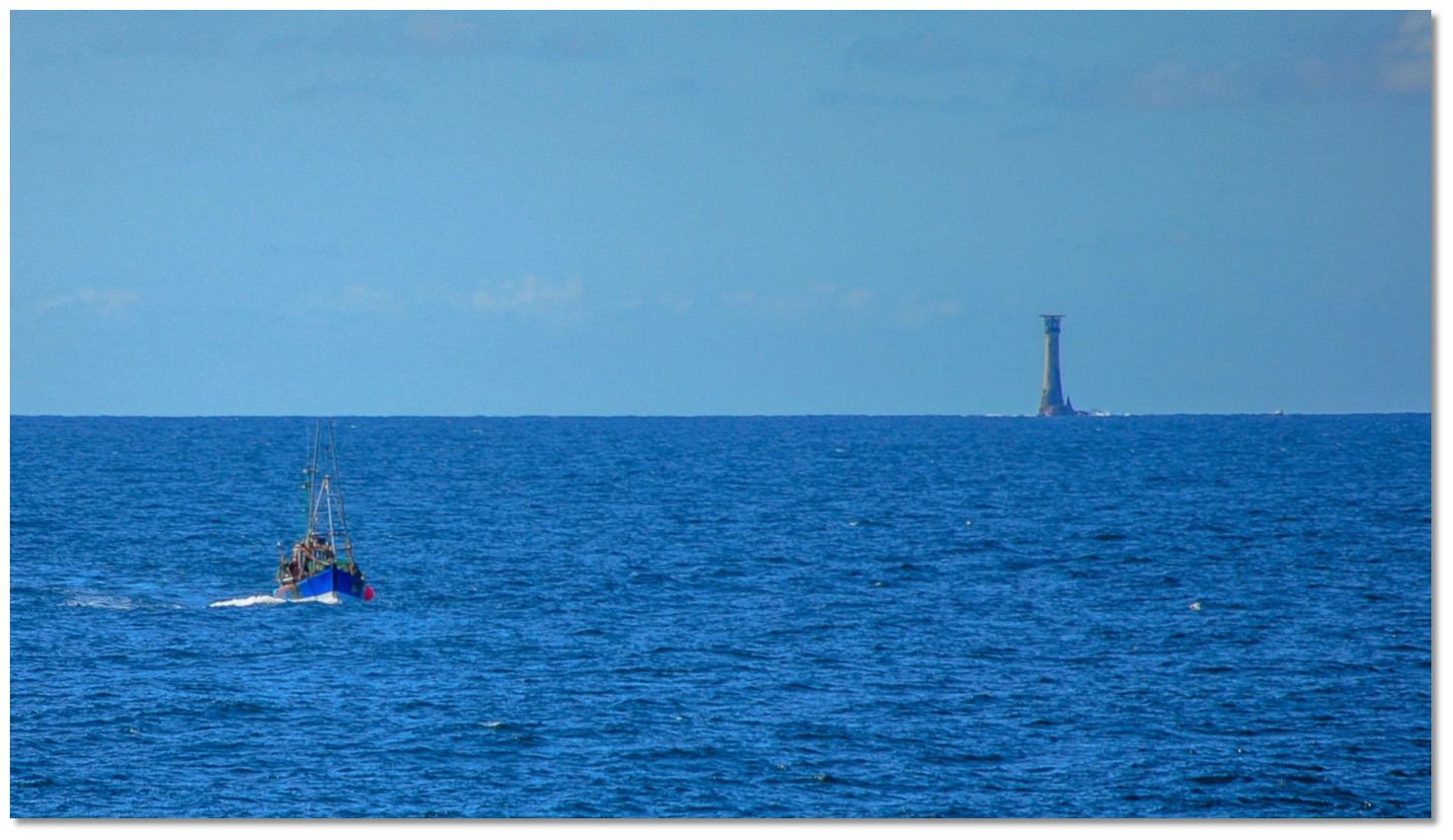 Entered adjacent to a lighthouse and marked by cardinal buoys, it offers a direct route to Saint Mary’s Sound setting up an approach to Saint Mary's Pool

Broad Sound is a primary commercial route into the heart of Scilly that is deep, wide and straight. Supported by four cardinal markers, the inner two of which are lit, and with an impeccable navigational mark of a lighthouse at its entrance, mariners to proceed with confidence in moderate, clear weather. With the support of good navigation and position (to monitor cross-track) and in good weather, it presents no difficulties to leisure craft, night or day at any stage of the tide.

But this is not an option in any boisterous weather as the western side of the island group have a greater number of isolated offshore hazards. These collide with the Atlantic swell three or four miles offshore and with groundswell, strong tidal streams and eddies threw into the mix, large areas of breaking seas result. Add any other weather elements to this and things can get ugly here very quickly. Likewise, though the fairway is wide, should any vessel accidentally stray from its margins they will quickly find themselves in great peril amidst shoals and hidden rocks. So this is best considered a fair-weather route. 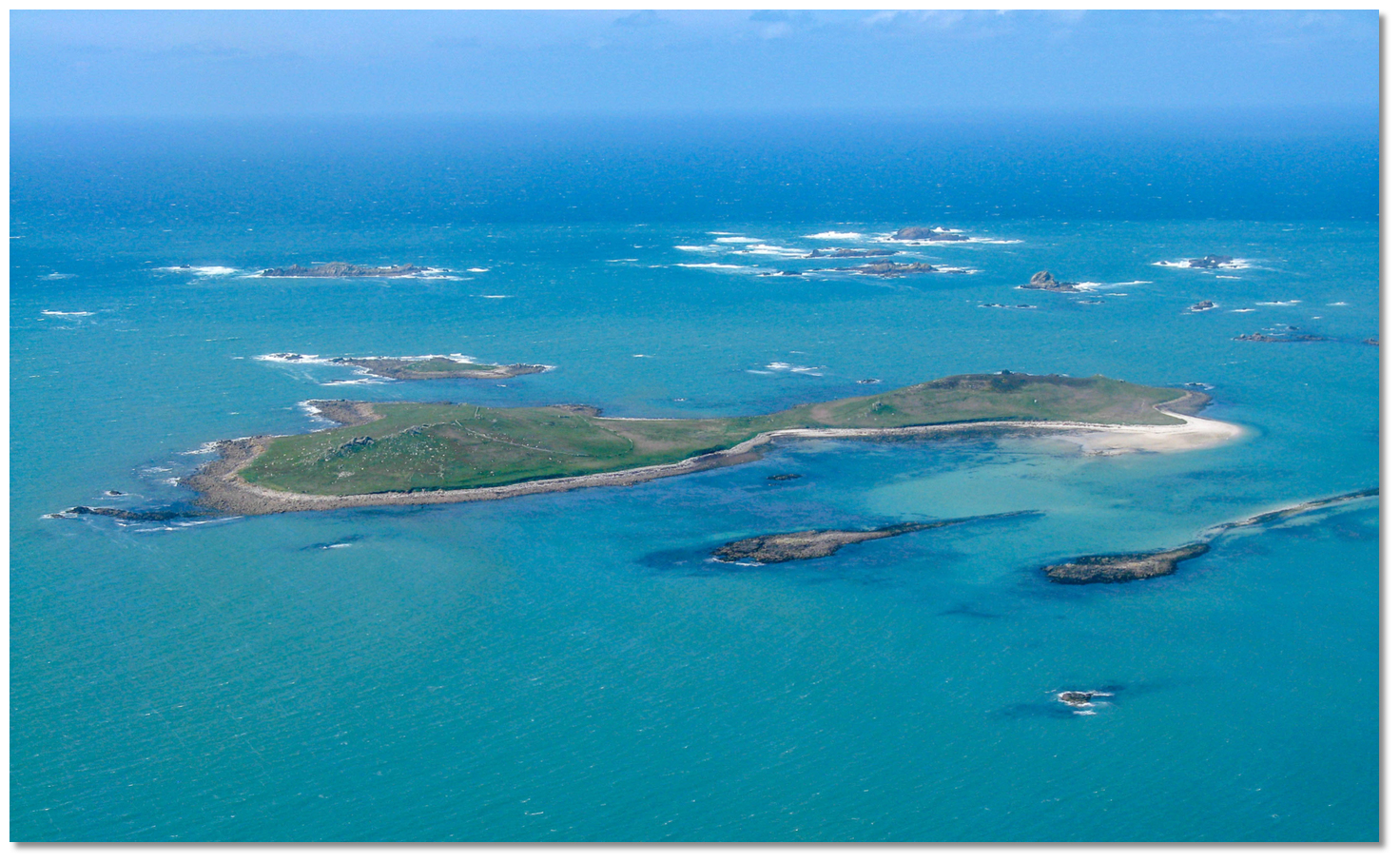 The fearsome sea area to the west of Sampson
Image: Michael Day via CC BY-NC 2.0

OVERVIEW
Broad Sound has a least depth of 15 metres at the centre of the fairway and is entered between Bishop Rock and the relatively deep Flemings’s Ledge, ¾ of a mile northward. 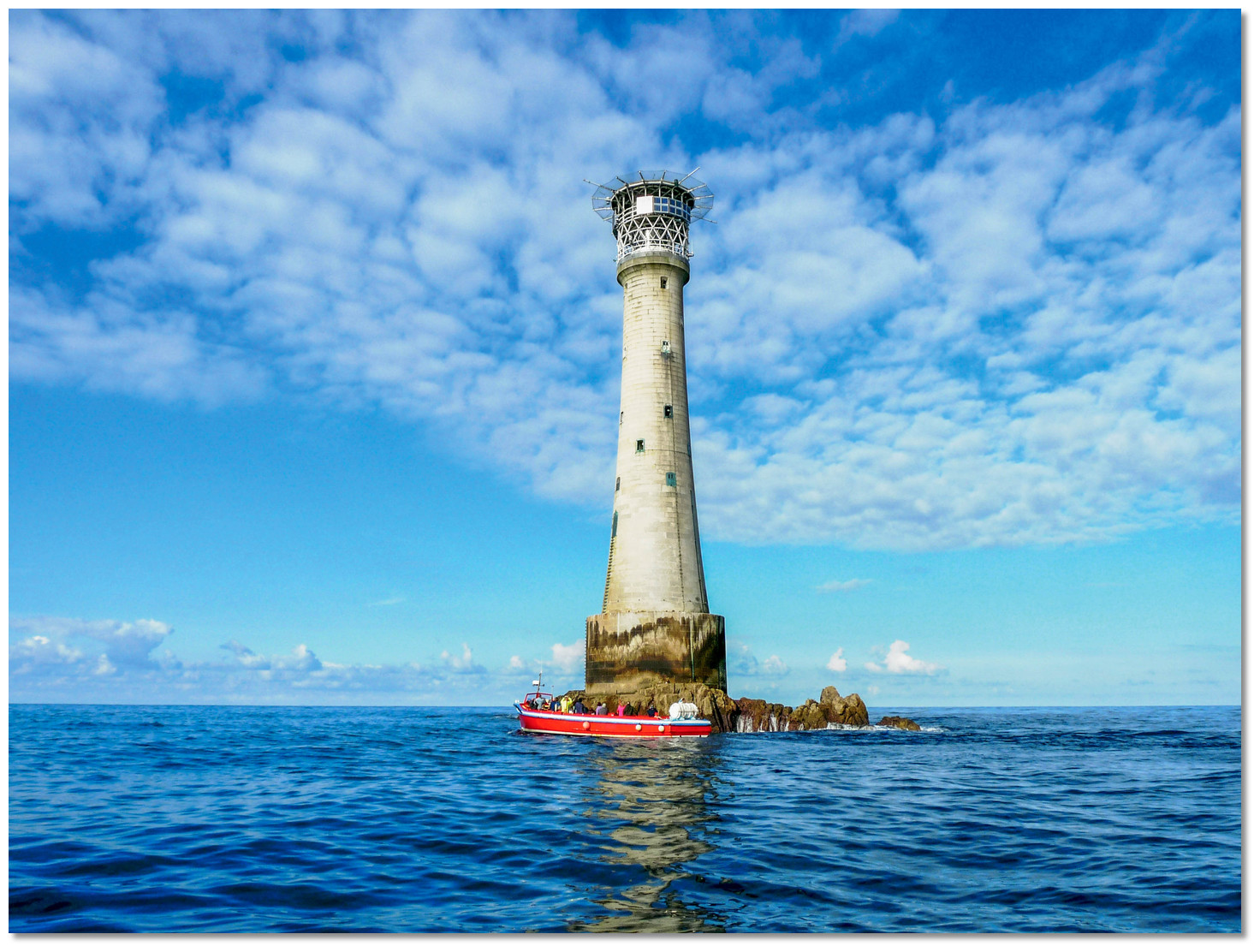 Bishop Rock, upon which the lighthouse stands, is the highest of a cluster of rocks that form the southwestern most dangers of the island group. These rocks are about ⅔ of a mile in extent, and all covered at high water. A ½ mile north of Fleming’s Ledge are beyond the Crim Rocks that flank the north side of the approach. The Crim Rocks consists of a cluster of dangers 1,200 metres long, and of these the most conspicuous is the Peaked Rock, 2 metres high, which lies 1½ miles north-eastward from the Bishop Lighthouse.

The set of the tides at a little to the south-westward of the Crim and Bishop runs strong to the north-westward, north, and north-eastward 8 hours out of 12. Expect heavy overfalls and tide-rips on these shoals that flank either side of the entrance to Broad Sound during spring tides. Likewise, with any groundswell, the sea breaks over the numerous shoal heads, with depths of less than 6 metes, that lie within an area extending 700 metres northeastward of Bishop Rock. This is similarly the case over Flemming's Ledge and particularly so over and near the rocky shoals in the vicinity of Crim Rocks.

From the entrance, the passage is a little under 5 miles to St Mary's Sound, is up to 1 mile wide, although it narrows to less than ½ a mile between Le Jeffery and Old Wreck shoals, and has a least depth of 15 metres. But it is fringed with hidden dangers on either side and, from about mid-channel westward of the northern end of Annet, the stream is rotatory in a clockwise direction sometimes setting across the range and should be guarded against until eastward of Old Wreck buoy. So it is essential that the helm maintains a careful watch for cross-track and, as always when closing Scilly, lobster pot buoys.

GENERAL DIRECTIONS
Run in a ⅓ of a mile north of Bishop Lighthouse and pick up the range mark of the Summit of Great Ganilly just open north of Bant’s Carn Point on 059° T. Great Ganilly is one of the Eastern Isles situated about 2 miles northeastward of the northern extremity of St. Mary's. Bant’s Carn is a 28-metre mound located about a ¼ of a mile southwestward of the northern extremity of St. Mary's. This range leads to St. Mary's Road as follows: 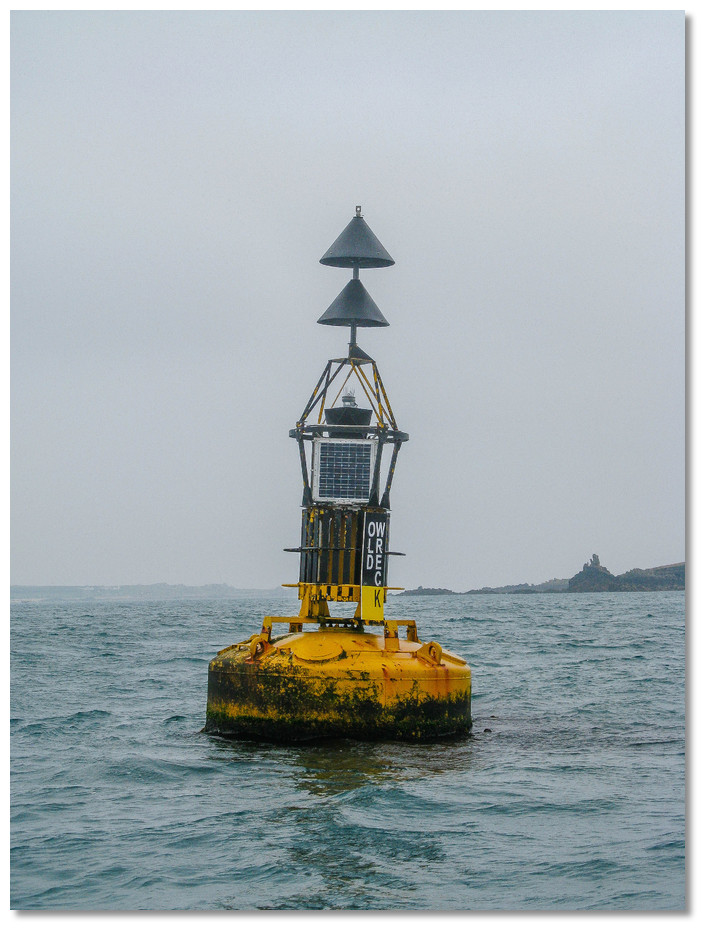 Old Wreck cardinal north of Annet
Image: Michael Day via CC BY-SA 2.0
The fairway marks provide a good check on the tidal stream and when the Old Wreck buoy is passed the cross-track stream eases. The closest danger to the transit is also in the vicinity of this cardinal which marks the sunken Old Wreck Rock with 1 metre over it. It is situated about north-northwest, ¼ of a mile from Annet Head and the 'Old Wreck' north cardinal moored in 18 metres, 200 meters north of the rock. Be certain not to overcompensate northwards as Jeffrey Rock, with a charted depth of 0.9 metres about 800 metres west of the buoy, flanking the opposite side of the channel - 300 metres northwest from the track of the range mark. So this is the key area to be on-transit.

Unfortunately from the low deck of a yacht, the distant main range mark can be extremely difficult to make out. A closer alternative is Star Castle in line with the northern Haycocks, 8 metres high and situated close off the northern extremity of Annet Island, bearing 066° T. This leads in through the entrance to the southward of Flemming's Ledge. Thereafter the 059° T Summit of Great Ganilly just open north of Bant’s Carn Point may be seen. If not, a course of 059° T steering towards Gunners Ledge and the correct sides of the following cardinals will bring a vessel through thereafter.

In using this alternate mark care should be adopted do not to mistake The Ruddy, a rock which dries to 4.3 metres close north of Annet, which with certain atmospheric conditions looms up largely, for the northern Haycock. A transit The Ruddy would have the vessel skirting the southern edge of Fleming’s Ledge shoal.

. The helm should keep a sharp eye to the marks when passing to the north of Great Smith. The tidal streams from North West Passage, St Mary's Sound and Smith Sound converge here and can interact unpredictably. Be particularly careful not to wander north towards Sampson as a drying area known as the Southern Wall lies nearly ½ a mile south of Samson.