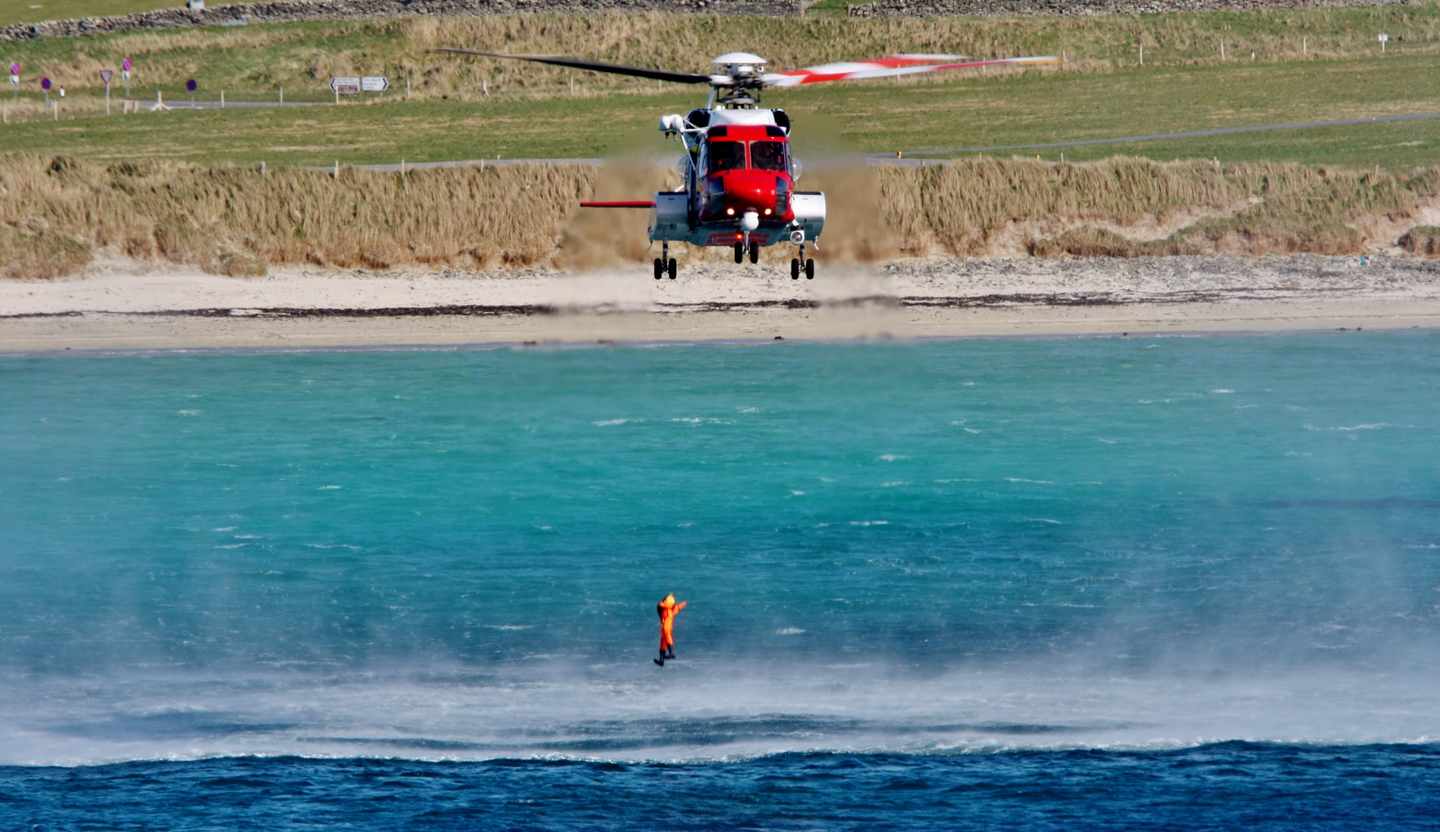 The greatest danger for a sailor is a Man Overboard situation. Once you fall overboard in heavy seas it is very difficult to turn a vessel back and find a lost crew member in any kind of seaway. If you are solo sailing, you are gone in a MOB situation unless you are in popular waters and are very lucky.

Man overboard is a prime way to lose your life at sea. A MOB must therefore be prevented at all costs.

Use a safety harness with double action locking safety hooks and clip on during night watch/solo sailing. When conditions become challenging use two and keep one clipped in place at all times when moving about. 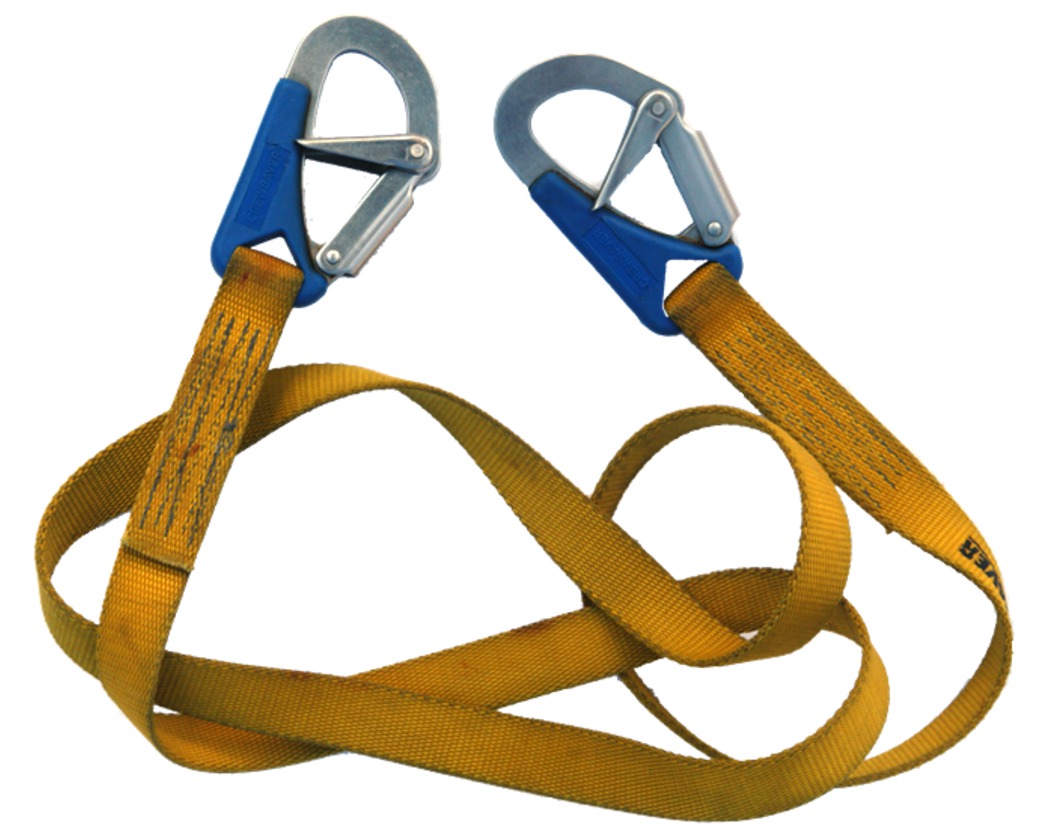 Only use safety harnesses with double action locking safety hooks. Cheaper harnesses use standard carbine hooks but these are not dependable for the role. We had a carbine hook spare, that we found randomly fell off at its strong point. We soon discovered it could easily self-open and simply fall off if it happened to wrap itself around the securing point, and turn in the motion we discovered below - try it yourself if you happen to have a hook. This vulnerability means they are simply not reliable enough to depend upon and the extra investment required for two double-action locking safety hook based lines is worth it.

In action, the safety harness' range should be shortened to allow it to reach no further than the guardrails. There should not be enough line to allow the user to fall into the water. Climbing aboard is a challenge at the best of times and as often nearly impossible with a weight of water, certainly so when dragged behind a moving vessel. This would be fatal for a solo sailor. Keep the harness short. Likewise always attach it to a specifically designed strongpoint and never to a guardrail that is not designed to take such a load. 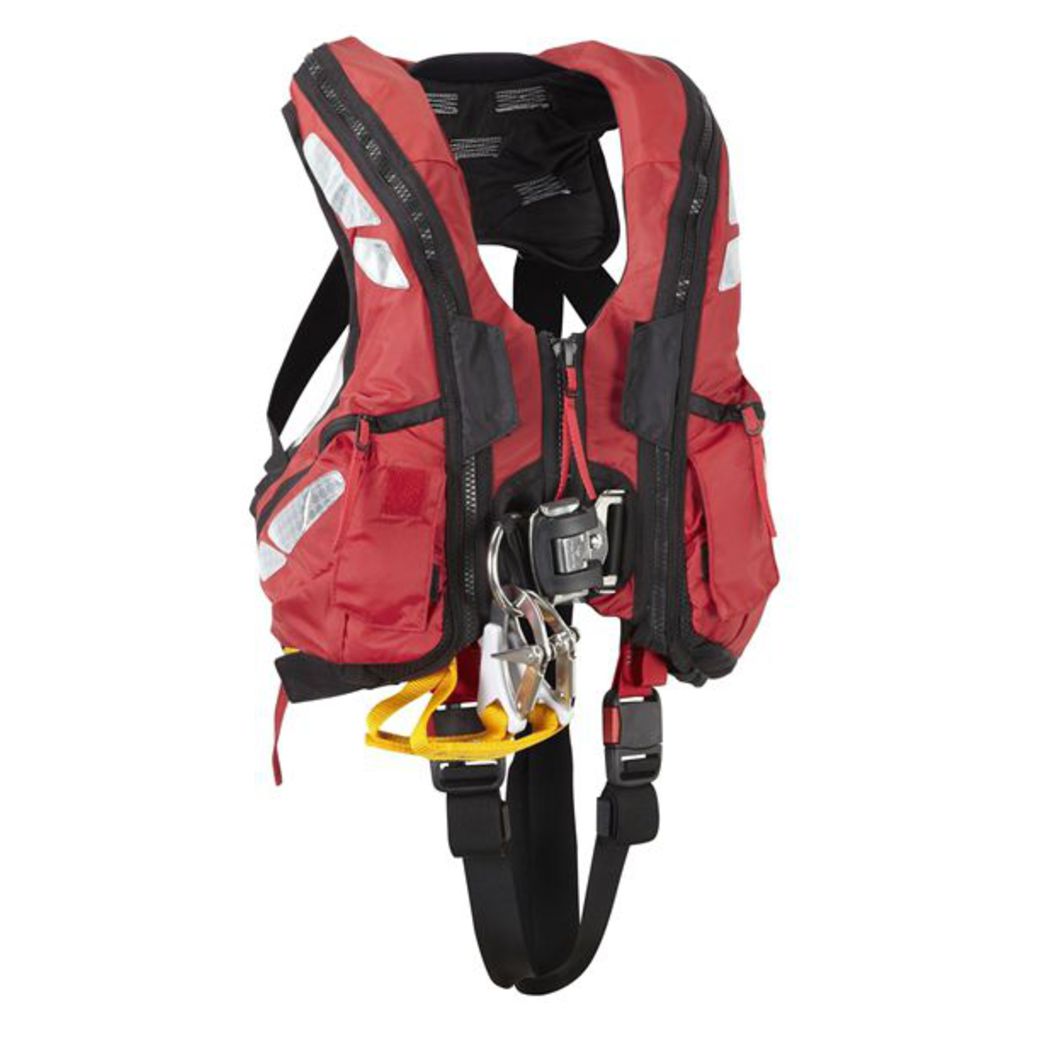 Offshore lifejacket with an integrated safety harness
Photo: Courtesy of CREWSAVER
You can connect a harness to an integrated harness and D-ring set into a deep ocean sailing jacket, an independent and separate harness or a combined inflatable PFD/harness. The latter PFD/harness is the best of all options for any offshore cruising as you are not forced to decide at any moment which is the more important to save your life, you have both and you can wear them all the time. A manual inflator, in which you pull a ripcord to inflate the device, is prefered unless you like the security of having an automatic backup.

BOAT ARANGMENTS
Boat owners should provide several easy cockpit clip-on points. The first of these should be accessible from both the cockpit and below decks. It is critical that crew members coming above decks can first reach out and clip-on securely before coming above decks. Hence the recommended location for the first securing ring is around the companionway area. Then the others should be within a short reach so that is is possible to move about with two lifelines connecting and removing one lifeline at a time. All the fixing points should be a heavy duty through-deck fittings. The shock-load of a crew member falling onto the eye can be between three to ten times their actual body weight. 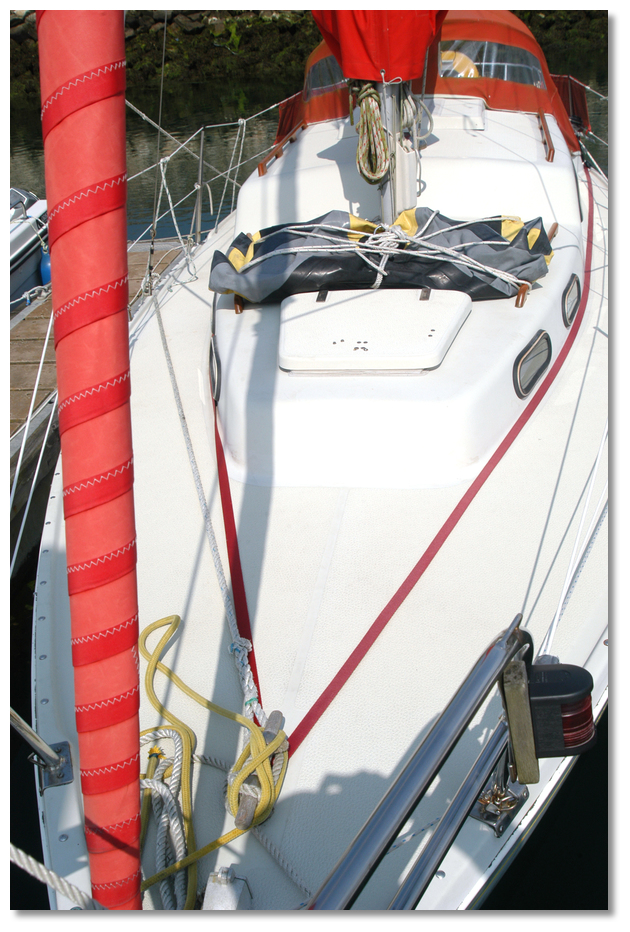 Webbing jackstays
Photo: Michael Harpur
Jackstays must be laid along the decks to allow crew members to safely work the foredecks. Traditionally these were stainless steel wires permanently laid along the decks. These, however, have a tendency to roll underfoot exacerbating the MOB problem. The modern approach is to use 25mm wide 2000 Kg breaking strain jackstay webbing as shown on the vessel below. This may be set in place before making passage and easily removed afterwards to clear decks and prevent UV degradation.

) disaster that cost the lives of 15 sailors. One of the earliest inquiries into the disaster was published jointly by the RYA and the Royal Ocean Racing Club (available as a PDF

) noted that six lives were lost as the result of the failures of harnesses or harness attachment points.

The following excerpt is from the 'Safety Harnesses' recommendations section:
In spite of an adequate Special Regulation and a paragraph in the Memorandum on Safety, six lives are believed to have been lost through the failure of safety harnesses or their attachment points.

It is recommended that the RYA and the RORC should draw attention to the importance of the following points;-

In addition, we would like to emphasise the practical advantages of a harness which is manufactured as a combination harness and life jacket.

RELATED FASTNET 79 OBSERVATIONS
The above downloadable report makes for important, if grim, reading. With at least 18 boats being rolled a full 360°, 5 boats became inverted and remained upside down for periods between 30 seconds and five minutes, 24 boats abandoned, 5 sunk, and approximately 170 were knocked down until their masts hit the water, there is a large body of experience from which to draw direct experience of how vital lifelines and their fixing points to crewmembers battling the elements...

''Safety procedures for the use of harnesses, and in some cases the recovery of men overboard, were severely tested by the storm. Those with two lines on safety, harnesses found them invaluable for use in the cockpit, particularly for the helmsman who had considerable difficulty if he was not held firmly in place. Many crews used the tails of sheets in addition to harnesses to lash themselves firmly into the cockpit...

Many of those who commented favourably on harnesses felt that two lines, each with its own hook, were an advantage...

The 38 boats which commented that there were insufficient handholds and harness attachment points give grounds for concern...''

The criticality of the lifelines lead to lifejackets taking a secondary level of importance... ''Crews appeared to attach considerably less Importance to life jackets than to safety harnesses as items of safety equipment...

Several competitors reported that some or all of the harnesses carried were of their own manufacture, generally "improvements" of standard models. Many of those who commented favourably on harnesses felt that two lines, each with its own hook, were an advantage. Harnesses which were simple to put on were also appreciated and those who had combined harness/life jackets felt that there was considerable benefit in combining the two Items of safety equipment in a single unit, Conversely harnesses which tended to snarl and twist when being put on and harnesses which were incompatible with life jackets attracted unfavourable comment...

In some cases the views expressed by those who did not use life jackets may have been conditioned by the lack of compatibility of life jackets and safety harnesses. There Is a strongly held belief that the first priority must be the safety harness and the life jacket is therefore of secondary importance... Four of the six men lost overboard through harness failure were not wearing life jackets. As none of the yachts involved was able to recover the lost men it is not possible to state that a life jacket would have been effective in saving life, but it must be assumed that It would have increased the chances of a successful rescue.''

It should also be noted that that being above decks was one of the most dangerous places to be, and below deck area one of the safest during Fastnet 79... ''six lives were lost as the result of the failures of harnesses or harness attachment points....

Two lives were lost as a result of people being trapped in cockpits; in one case the safety harness of a trapped and injured man was cut to free him from the cockpit and he was unable to retain his grasp on the yacht when It righted; in the same incident a crewman drowned as a result of being trapped in the cockpit of an upturned boat. There were no instances of yachts, sinking upside down and all those temporarily trapped in cabins had time to abandon the yacht after she righted''.