Kilmore Quay to the Isles of Scilly

This is a route from Kilmore Quay on the southeast corner of Ireland to the Isles of Scilly. It is a direct route passing to the east of the Saltee Islands to the deepwater anchorage of New Grimsby Sound, between Bryher and Tresco, in the north end of the Isles of Scilly.

is a good Irish Sea staging point for a departure to the Isles of Scilly. The picturesque fishing village has a small marina, a good chandlery with plenty of restaurants and lively pubs to await the best time and weather to the right arrival time in Scilly. These qualities are daylight with light weather conditions, see Coastal Overview for Land's End to Isles of Scilly

and with the passage being about 140 miles, berth to berth, it is well within day sail and a reliable forecast.

Likewise, as the course is almost due south, a little westerly shift off of the prevailing wind will help speed the passage and make it less of a beat. New Grimsby Sound

, between Bryher and Tresco, is also the closest primary berthing location with secure moorings just over a ½ mile inside its protective heads and an anchoring location before that. Moreover, the north approach to it, and Scilly as a whole, has no outlying hazards. 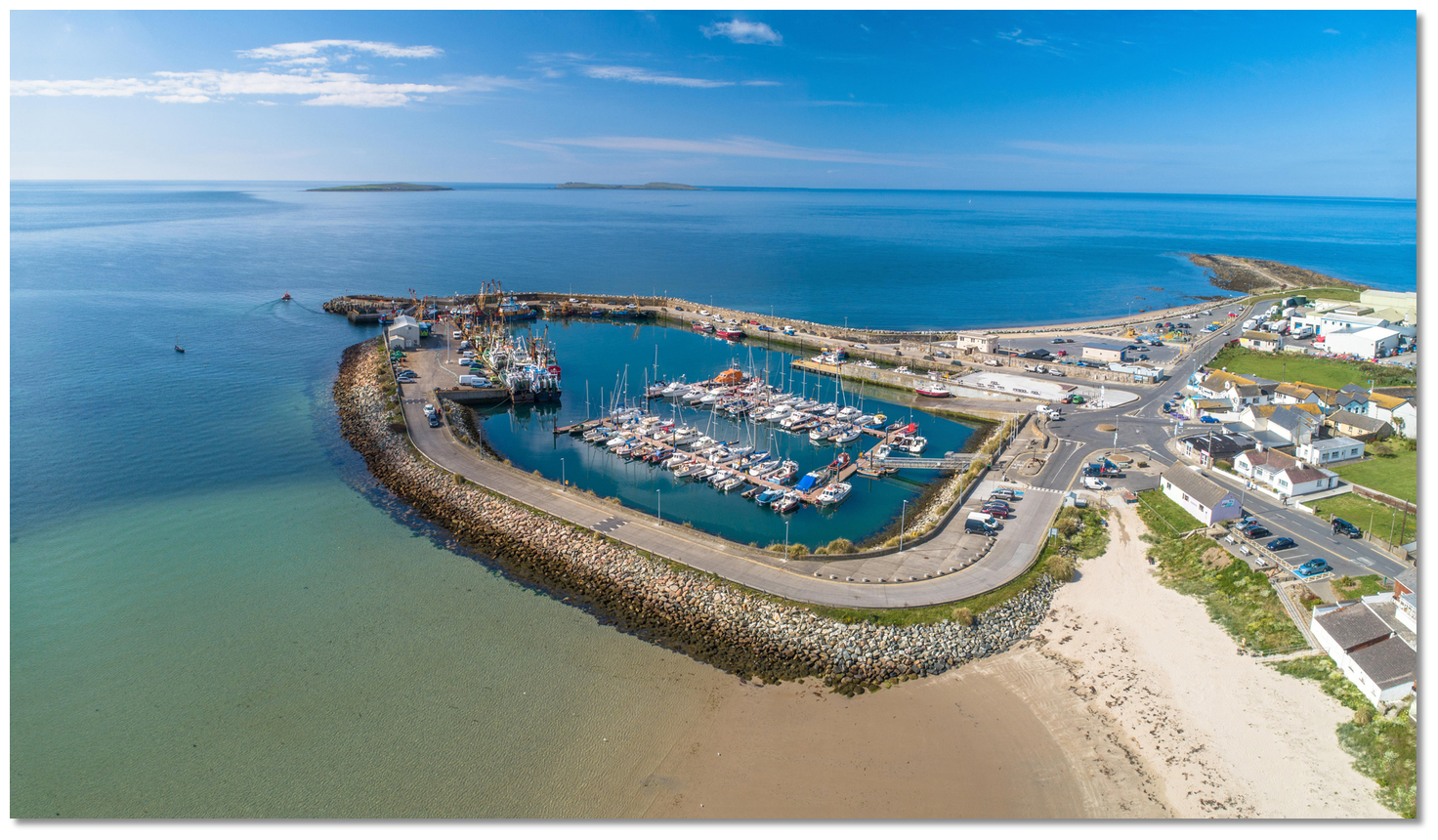 From Kilmore Quay safe water buoy the route passes to the west of the Saltee Islands. Passing 300 metres northwest of Mutroch's Rock, and Jackeen Rock lying to the northwest of the Great Saltee and then continuing west of their southern dangers the Brandies, Coningmore and Coningbeg Rocks as well as close west of the Red Bank shoal. From there it is possible to set a course across the Celtic sea directly for the 'Northwest Scilly' waypoint.

Star Castle Hotel on the west side of Hangman Island on 157° T
Image: Michael Harpur

The 'Northwest Scilly' waypoint is on the traditional range mark for New Grimsby on the transit formed by Star Castle Hotel on the west side of Hangman Island with a bearing of 157° T. Steering for the New Grimsby Sound

Initial Fix, just under a mile along the transit and using the haven directions, will lead safely in. 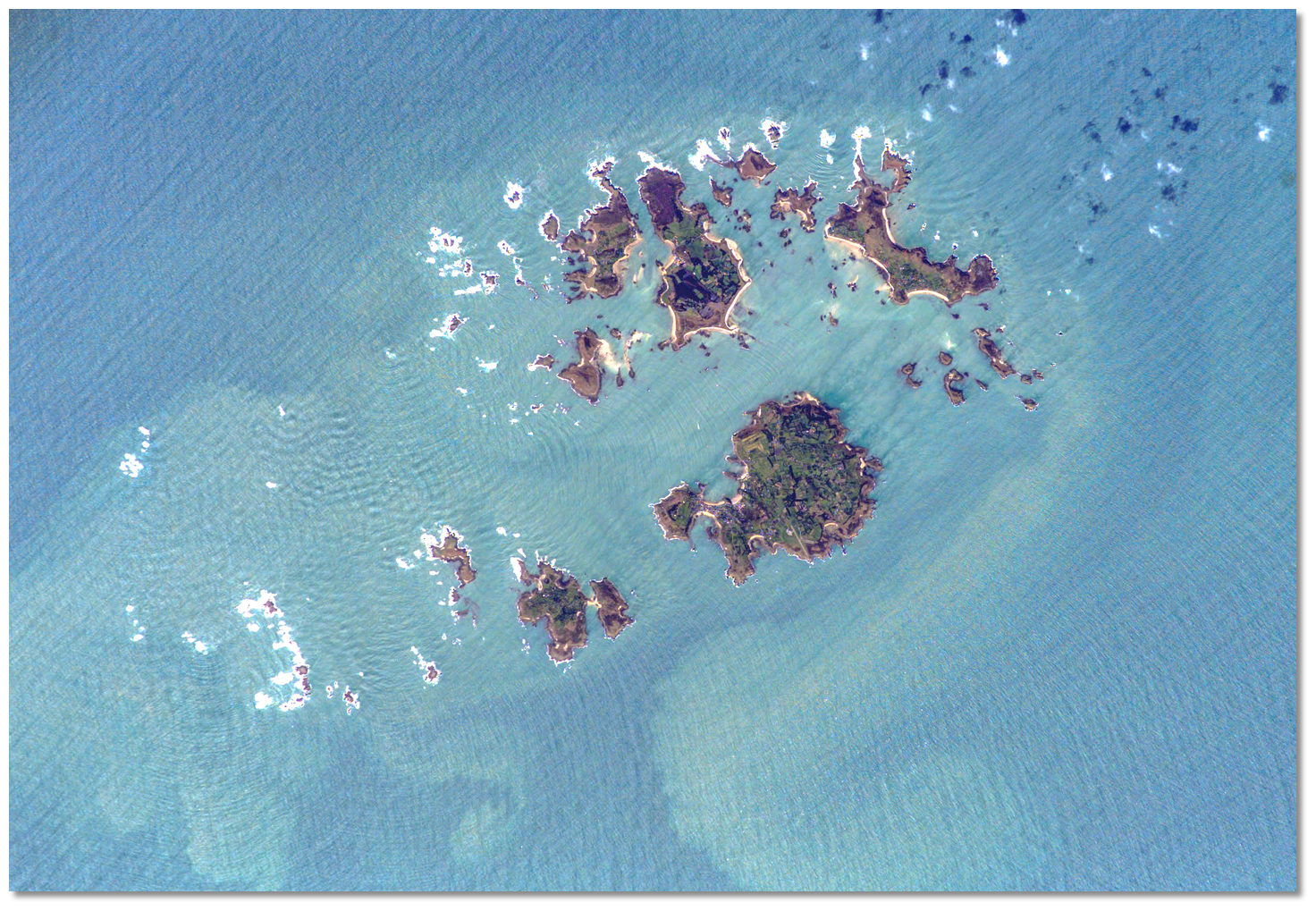 The southwest, west and northwest side of the Scilly archipelago take the full force of the Atlantic Ocean. The result is that these parts of the group are more weather-beaten and ragged with the western side of the group containing the greater number of isolated offshore hazards. This presents an uninviting aspect to vessels approaching from the north or west. Faced with this inhospitable coastline most newcomers to the Isles of Scilly favour the principal entry point Saint Mary’s Sound which is more suited to vessels approaching from the south and east. Saint Mary’s Sound has the comfort of presenting itself between two obvious island landmasses, replete with lighthouse, and lit marks for the principal hazards in the sound itself. However, vessels approaching from the north will find that this requires the island group to be rounded, adding about 15 miles to the journey and more complexity after an overnight passage. Then there is the possibility of additional tidal issues that can be experienced between the landmasses of Saint Mary’s and St Agnes, not to mention a longer trek into St Mary’s Pool 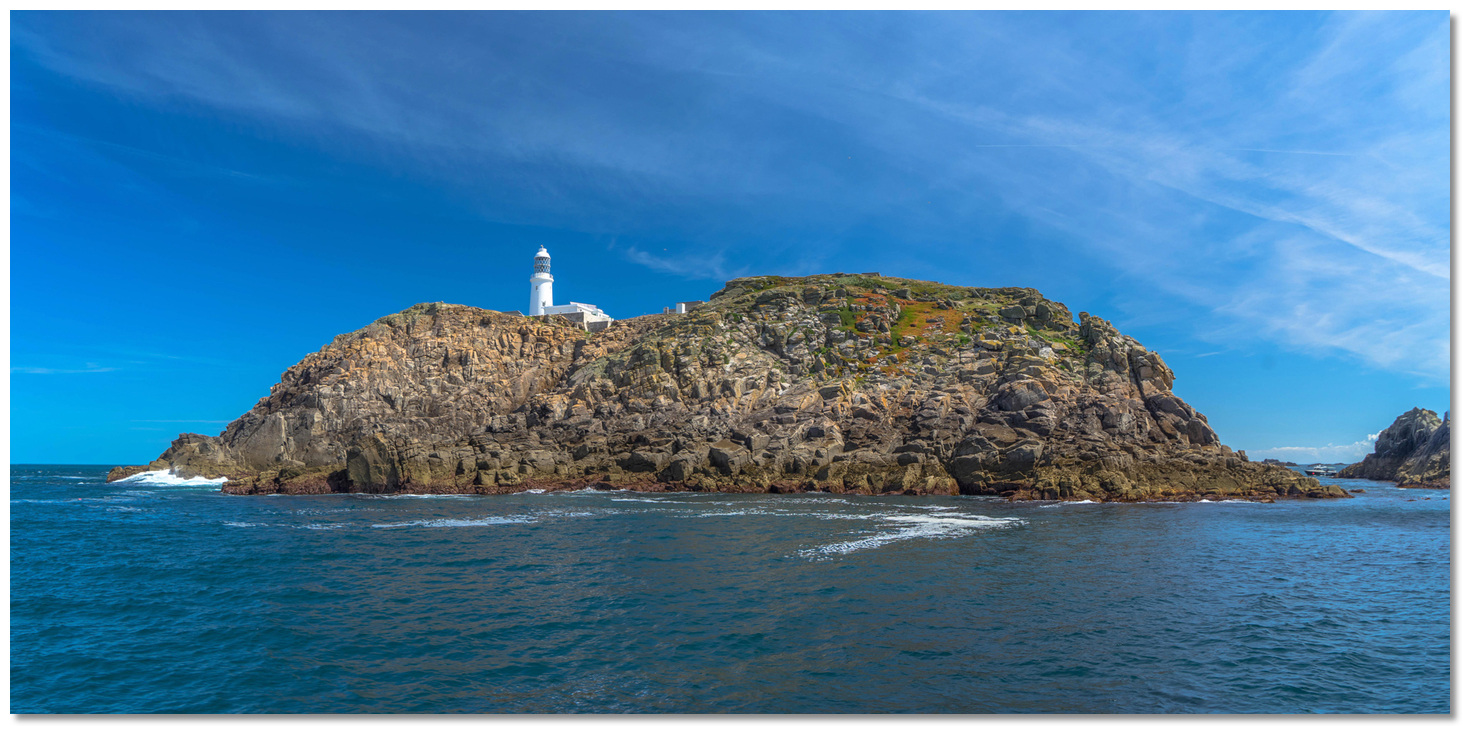 Round Island Lighthouse marking the north end of the Isles of Scilly
Image: Michael Harpur

as the initial landing point of entry avoids all of these issues. Its disadvantages are that it has no lit marks for a night entry and an unmarked rock flanking the eastern side of the approach channel. These issues are not overly taxing during a daylight entry as the Kettle Bottom & Kettle Rocks are easily avoided and the daylight range mark assists in clearing them. 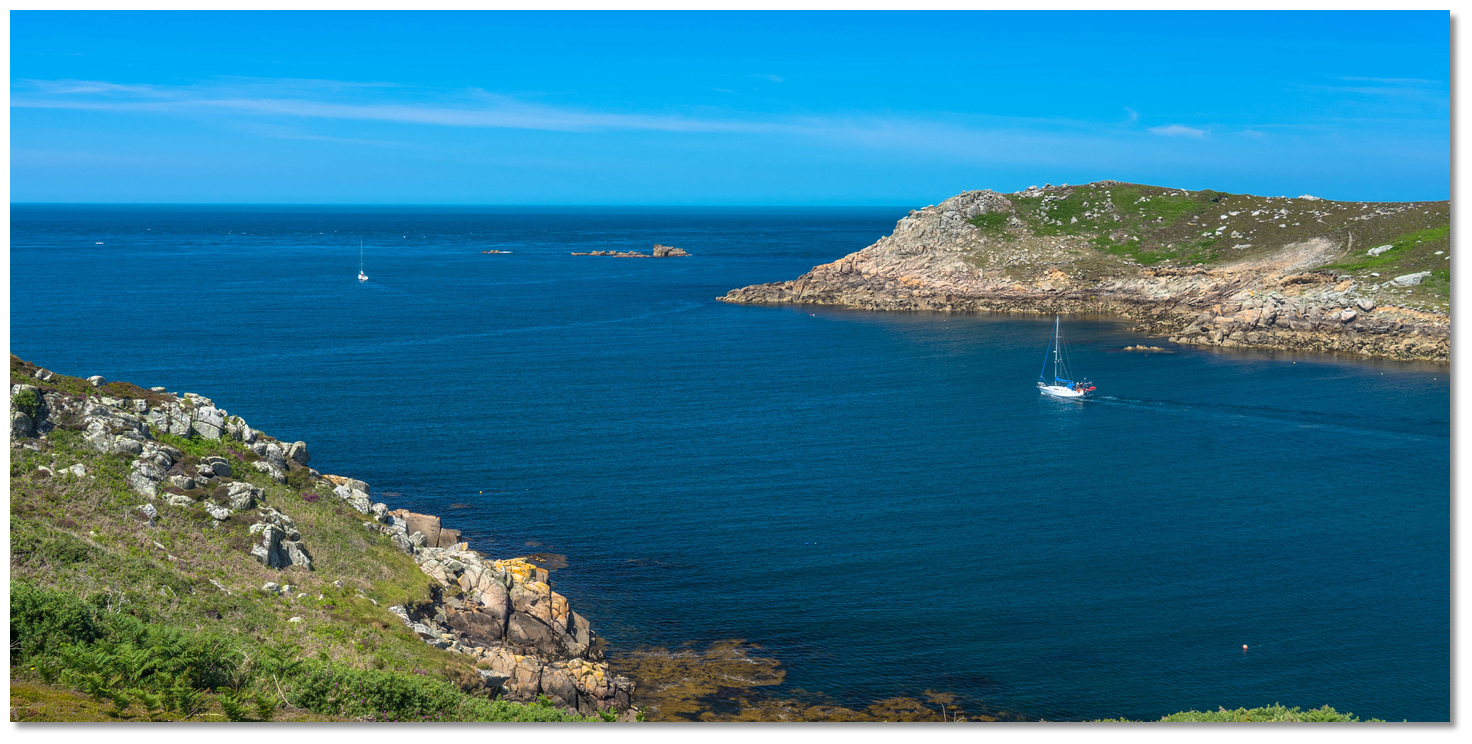 With these issues set aside, its advantages are readily evident. There are no outlying rocks or ledges northward of a line joining Shipman Head, its prominent steep to western entrance, and the prominent Men-a-vaur rock. Men-a-vaur lies close east of Round Island which itself is less than two miles from the arrival waypoint. Its lighthouse makes this entire section of the group positively identifiable.

Positioned between two island landmasses it is a clearly defined location that has the comfort of a deep increasingly sheltered approach channel. With a castle on its eastern flank, it cannot be mistaken for Old Grimsby on the opposite side of Tresco. As an initial arrival location, it offers a very good berthing location, with visitor moorings. 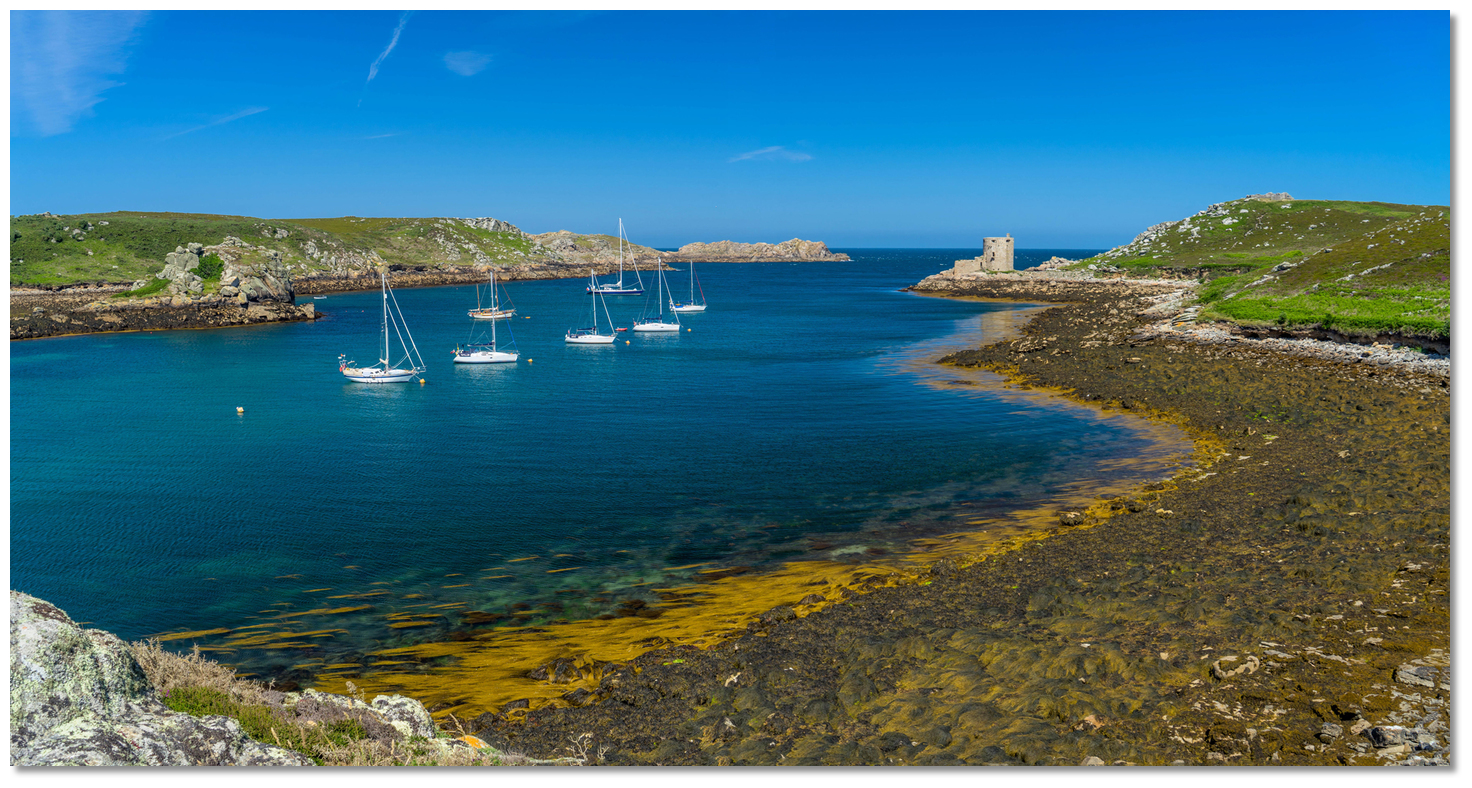 Moreover, if St Mary’s Pool is key to the agenda, say for clearing in, a subsequent sufficient rise of tide could provide sufficient depth to use the Tresco Channel crossing the Tresco Flats 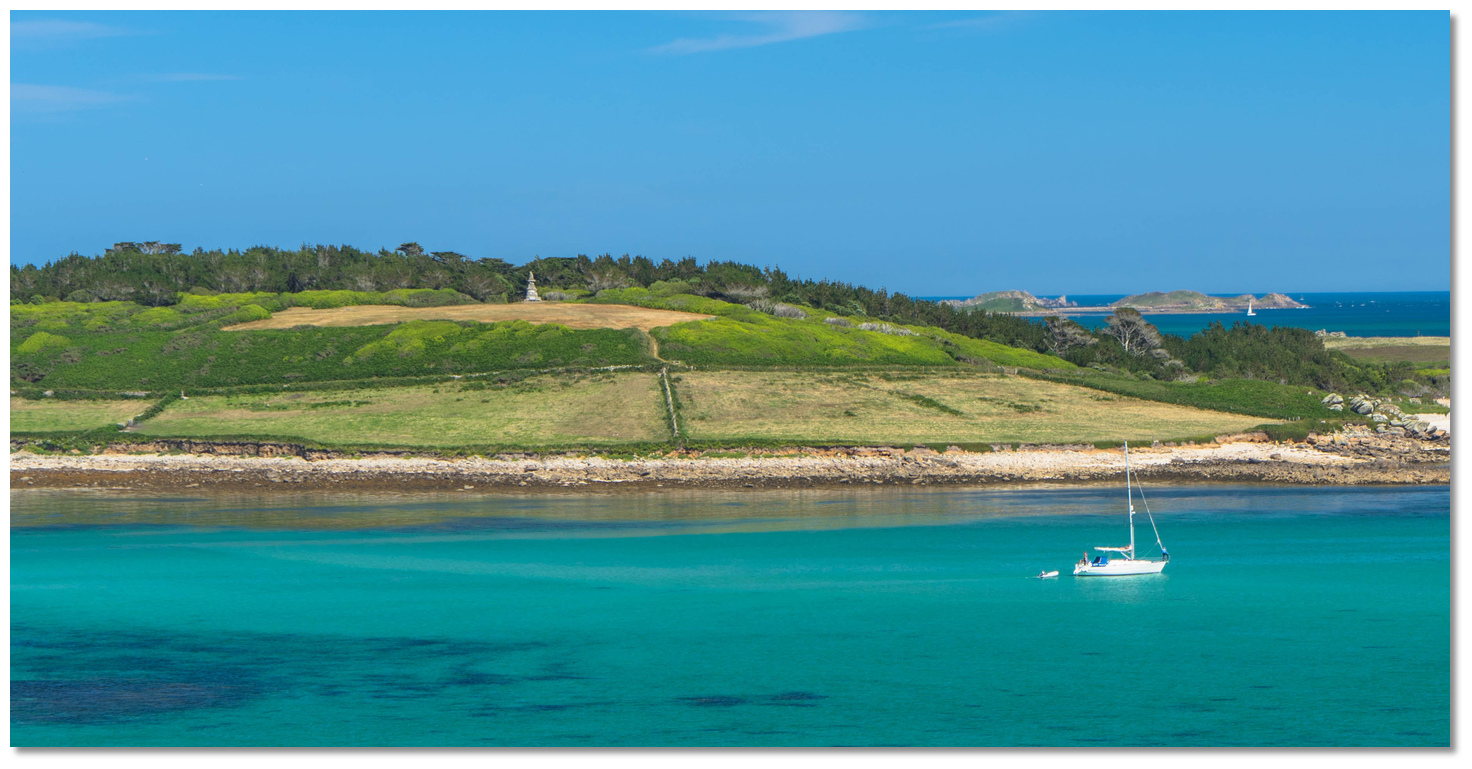 Alternatively, should the arrival coincide with light weather and good conditions, it keeps open the possibility to take advantage of the auspicious window by adjusting course westward earlier and making directly for St Mary’s Road by discarding the Northwest Scilly waypoint and proceeding southward to the west of the Northern Rocks, the shoals and outliers to the west of Bryher and Sampson islands, to pick and use the North West Passage 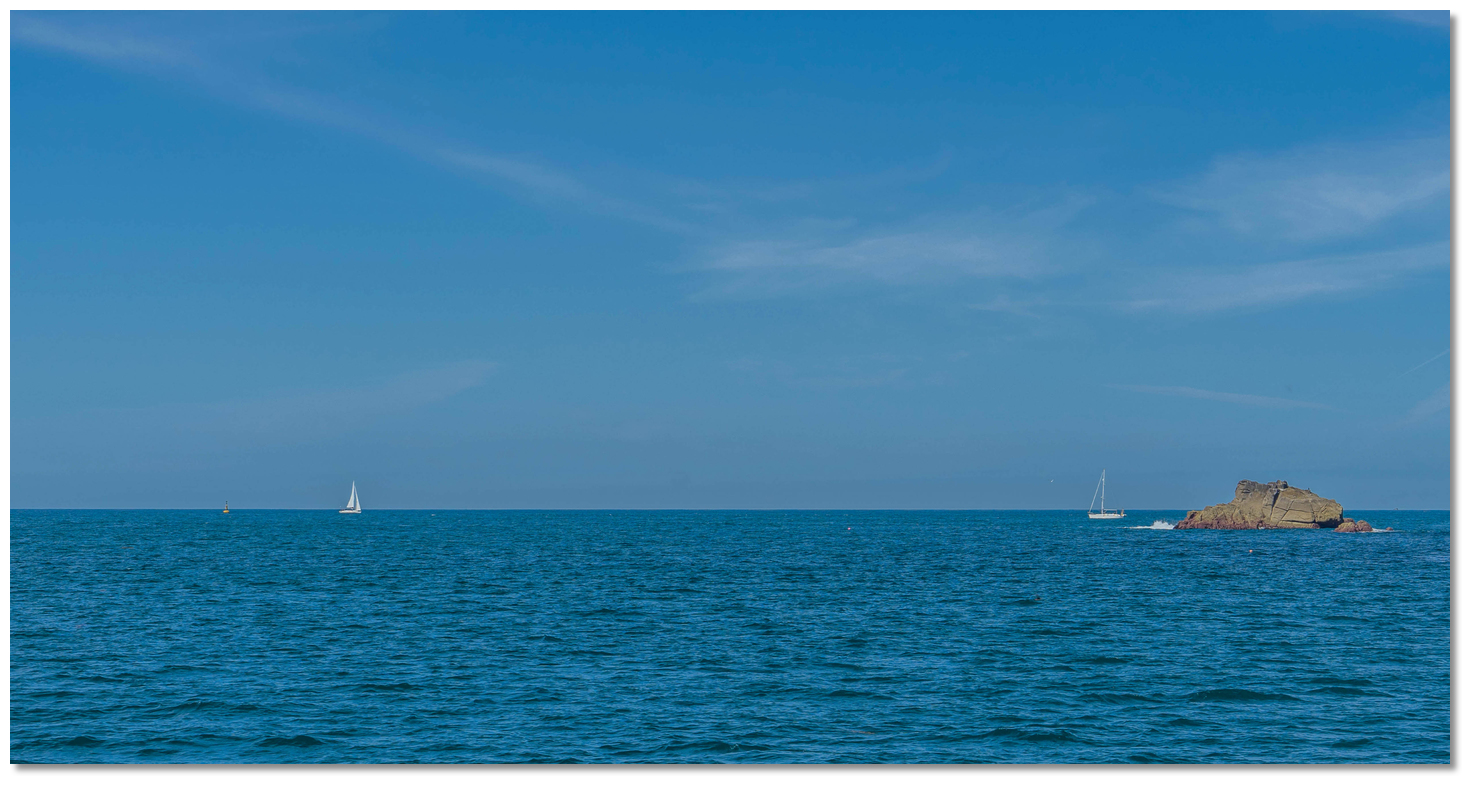 In all cases, as detailed in the Coastal Overview for Land's End to Isles of Scilly

, the key to a successful trip is departure timing and weather so that Scilly may be approached in light weather when there is good visibility in daylight. Leave ample time should the planned initial berth not be suitable, or comfortable, and an alternative is required. It is a less than 24-hour sail so ideally, it is advisable to set off in the morning so as to arrive at Scilly the following morning with ample daylight to arrive and get settled in. Tide is not a strong consideration in the Celtic Sea once away from the Irish and English coasts it is marginal and broached boat ways.

But, if the weather is rough, stay put and if it is a long broken spell perhaps enjoy some time cruising in the Waterford Estuary. Scilly has no single all-weather, all tide port of refuge that will provide safety in bad conditions and it is best to wait. On the other hand, those who do make this journey during the season and arrive in fair weather will have a wonderful experience. Speaking from personal experience, having only sailed the Irish Sea prior to this venture at the time, I was surprised to find overnight sailing in a t-shirt and shorts was real for the first time as opposed to fully deep ocean gear that had hitherto been the experience. Moreover, as the site’s imagery presents, mostly my own, with the white sands and crystal clear turquoise waters, one could be forgiven for thinking they had arrived in the Caribbean during a fine weather spell.

LISTED WAYPOINTS
The complete course is 131.55 miles from the waypoint 'Murroch's Rock' to 'Northwest Scilly' tending in a southerly direction (reciprocal northerly).