The Saltee Islands are two small islands that are situated off the southeast corner of Ireland, approximately halfway between Hook Head and Carnsore Point. This is a secluded anchorage on the west side of Little Saltee Island, the smaller and northernmost of the two islands.


The Saltee Islands are two small islands that are situated off the southeast corner of Ireland, approximately halfway between Hook Head and Carnsore Point. This is a secluded anchorage on the west side of Little Saltee Island, the smaller and northernmost of the two islands.

The western side of Little Saltee is a stay aboard anchorage that offers protection for up to about a force four from the East. The Saltee Islands require careful navigation owing to the numerous outlying rocks and strong currents. They are however very workable in settled clear conditions and highly enjoyable.

Keyfacts for Little Saltee (west side)

In the anchorage situated 200 metres off Little Saltee Island’s western shore about midway along the island.

Taking a mean tidal offset from Dover's tide, we expect your targetted date's associated local tide at Little Saltee (west side) to be:

Click the 'Next' and 'Previous' buttons to progress through neighbouring havens in a coastal 'clockwise' or 'anti-clockwise' sequence. Below are the ten nearest havens to Little Saltee (west side) for your convenience.
Ten nearest havens by straight line charted distance and bearing:
These havens are ordered by straight line charted distance and bearing, and can be reordered by compass direction or coastal sequence:
To find locations with the specific attributes you need try:

From the initial fix head due south towards Little Saltee Island. Then pass along the western side of Little Saltee keeping within the island’s 2 - 4 metre contours until the midpoint of the island.

This approach keeps a vessel well clear of the two covered dangers situated west of Little Saltee; Murroch's Rock and Jackeen Rock. Murroch's Rock, awash at low water, lies just under ¾ of a mile to the northwest of the Little Saltee Island.

Jackeen Rock, with 1.5 metres of cover, is situated just over a mile west by southwest of the north tip of Little Saltee Island.

The unnamed Privateer Rock, clearly marked on the charts half a mile west of the centre of Little Saltee Island, has 3 metres of cover and should present no difficulty for leisure craft.

Continue along the coast until Goose Rock is identified ahead.

The rock dries to 2.6 metres and lies 300 metres off the southwest corner of Little Saltee Island and as such will be clearly visible.

No landing is typically possible here. However at low water, in very settled conditions, the three storm beaches that face Great Saltee, around the islands southwest corner of Little Saltee, may offer landing opportunities. Keep offshore on the approach as a reef extends from the southwest corner.

From a sailing perspective this is another excellent Little Saltee Island lunch stop or tide wait location for those who do not want to commit to the time or expense of entering Kilmore Marina. It is also close enough to St. Patrick’s Bridge to observe the precise turn of the tide so as to maximise the route

There are no facilities on the Little Saltee Island and this anchorage offers no landing capability. Immediately ashore Kilmore Quay has all facilities. 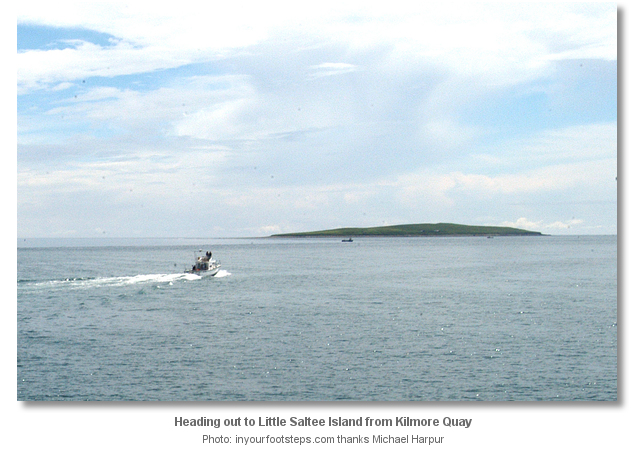 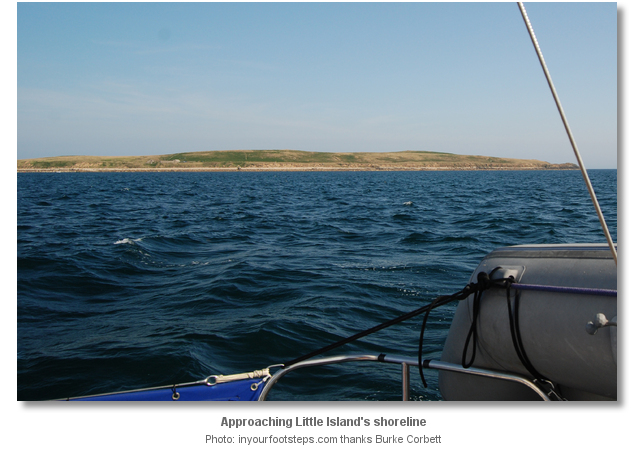 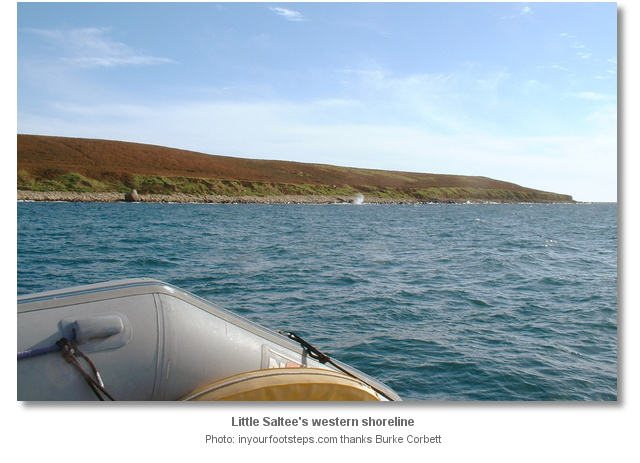 About Little Saltee (west side)

From a sailing perspective this is another excellent Little Saltee Island lunch stop or tide wait location for those who do not want to commit to the time or expense of entering Kilmore Marina. It is also close enough to St. Patrick’s Bridge to observe the precise turn of the tide so as to maximise the route

These additional images feature in the 'How to get in' section of our detailed view for Little Saltee (west side).